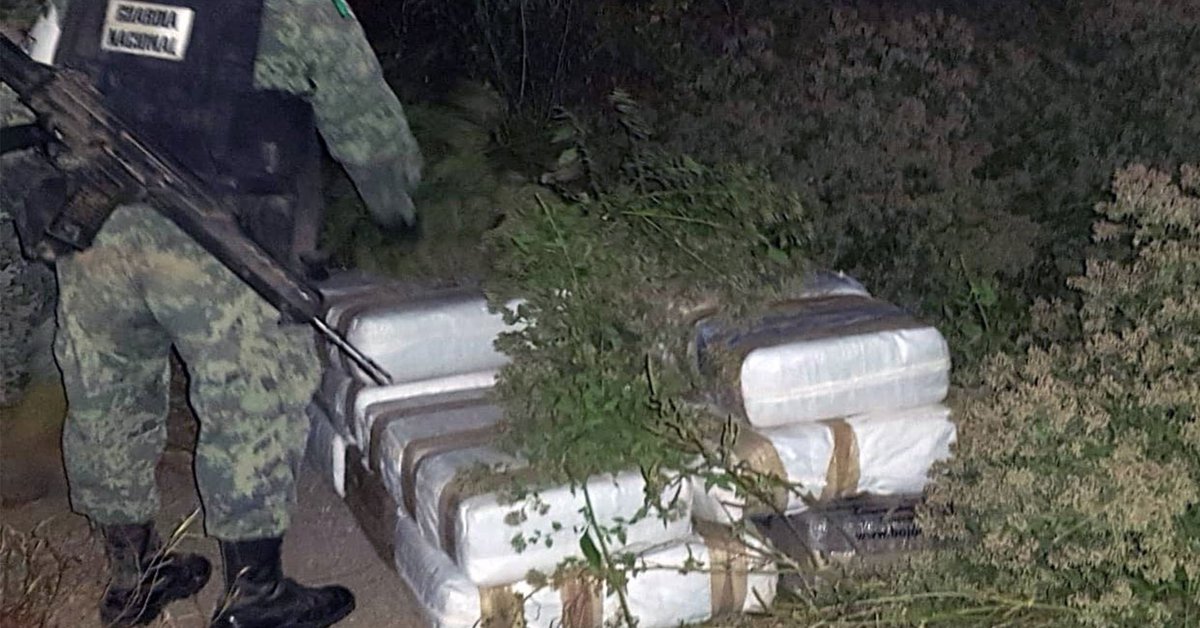 Authorities of the National Guard and the Mexican Navy seized at least one and a half tons of marijuana in Culiacán, area dominated by Sinaloa Cartel.

According to the short report, the operations also had the collaboration of the entity’s Security SecretariatAlthough the exact site or the actions that allowed such a seizure of the abandoned drug were not detailed.

For the shared images, It is observed that it was between the night and the early morning hours of the last day. The load was hidden in the undergrowth and packed in rectangular sacks that, in turn, they were secured with brown tape.

“We work together for the good of the citizens. In coordination with @SEMAR_mx and @ sspsinaloa1 We secured a shipment of around a ton and a half of apparent marijuana abandoned in a town in the municipality of Culiacán #Sinaloa. #JusticiaYPaz ”, detailed the National Guard on its Twitter account.

Sinaloa, and in particular Culiacán, is the stronghold of the cartel led by Ismael Zambada García, he Mayo, a founding leader who was in charge of operations for the transfer of narcotics in the five continents. After the fall of the other leader, Joaquín Guzmán Loera, El Chapo, the organization was in charge of Mayo, who has never been in jail and operates in stealth.

The United States authorities obtained the extradition of the Chapo to New York, where he was tried and sentenced to life in prison for his activities in organized crime. Now they are looking for Mayo, charged with 14 federal kidnapping counts, murder, distribution and drug conspiracy.

In another seizure registered this day in Sinaloa, The National Guard prevented the shipment of four kilograms of crystal to Sonora, which was hidden in rolls of waterproofing.

“We continue with operations in parcel companies to prevent the trafficking of illicit substances. In Culiacán, #Sinaloa canine pairs located more than four kilos of probable drug crystal hidden between rolls of waterproofing tape that was destined for #Sonora”, Detailed the dependence on their social networks.

Sonora is a disputed territory due to its border location with the US, the country where the shipments of the Mexican cartels are destined.

According to federal authorities, the square is disputed by the Sinaloa Cartel, headed by Ismael May Zambada and Lthe Chapitos, The Salazars (faction of the Sinaloa Cartel), the Jalisco Nueva Generación Cartel (CJNG), as well as remnants of the Los Beltrán Leyva Cartel commanded by Fausto El Chapo Isidro Meza.

A war in the desert of this state has shown the resurgence of Rafael Caro Quintero, The Narco de Narcos, who would lead a cell called the Caborca ​​Cartel, which in turn is in dispute of the square against The Durangos, faction linked to Los Chapitos. The drug lord had his heyday in 1980 and was arrested five years later for his participation in the murder of the agent of the DEA (Drug Control Administration), Enrique Kiki Camarena. After spending nearly 30 years in prison, he was released in 2013 and has evaded justice ever since.

See Also:  "Hard work and fear." A former member of the Brukna community tells about his experience - in Latvia - News

Another coup in the dominions of Sinaloa was registered on October 22. After taking a tour in the municipality of Culiacán, Mexican Army agents located and secured a drug laboratory to produce alleged fentanyl and they arrested a subject in flagrante delicto, in addition to assuring him of weapons, ammunition and narcotic pills.

Data from the federal government indicate that from January to October 20 they have insured 245,508 kilograms of drugs, which includes marijuana, cocaine, heroin, opium gum, methamphetamine, and fentanyl

Coup to the narco in Sinaloa: they secured a laboratory to produce fentanyl

Coup to the Mexican drug dealer in Colombia: they seized two tons of cocaine in a “submarine” with a value of USD 67 million