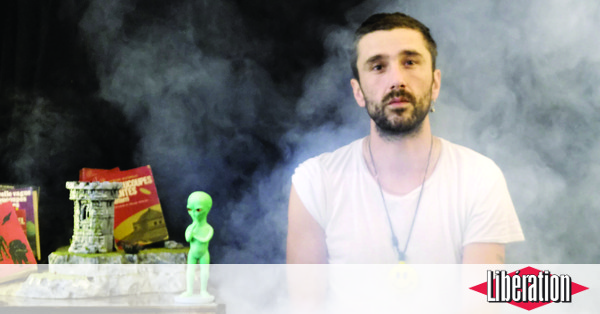 Spiritism and New Technologies. We first heard a howl (owl or owl?) Perched on a kick, majestic organs later and then percussions. Full of rhythms superimposed wildly, and yet well organized. This is where our entry into Shit Forest, first album of Danse Musique Rhône Alpes. Followed in order of appearance a Ocarina Belt that surrounds you in mystery, innocent and complex at the same time, made of braided bells, then Taken on Maison-Roche, Soft Archery… And the strange impression that it thickens as you advance through the disc. There is a breath, an atmosphere, a silence that surrounds each piece, as if we had witnessed the recording, that a curtain had been set aside for us. These are beautiful ordered structures, percussions like a double helix of DNA, into which micro-accidents slip. Literally haunted music.

Ranged from the IDM / experimental side on the platforms, Loup Gangloff, at the origin of this solo gesture, has long surveyed the slopes of the northern Rhône. Self-taught drummer, designer and winemaker (family near Condrieu) formerly known within the frenetic duo Deux Boules Vanille, he now lives in Touraine from where he answers the phone, between two rehearsals. What then does Shit Forest ? “I wanted to imagine an enchanted forest that would be as crappy as life today, hence the name.” Very attracted by spiritualism, the haunted thing, analogies with unknown worlds that we do not control, Loup Gangloff specifies that even in his percussions, a lot of things escape him: “There is a part of accident caused, I work with tapes synchronized with machines first, to which I add percussions full of errors.” We stay on the hitch to bounce back on one of the titles that challenges us: Divination by brushes. According to the musician-designer-winemaker, everything comes from a book specializing in occult practices: “I discovered that there was a ‘method’, petchemistry, which consisted of reading fate in brushes. Not a graceful name, but a remarkable discipline! You know that there are also followers who offer a reading of the future from the buttock line? Jacky Stallone, Sylvester’s mother, was a great ambassador for rumpology. ” While waiting to taste his rib-roast, take a walk in Shit Forest, Wolf is there, whole.