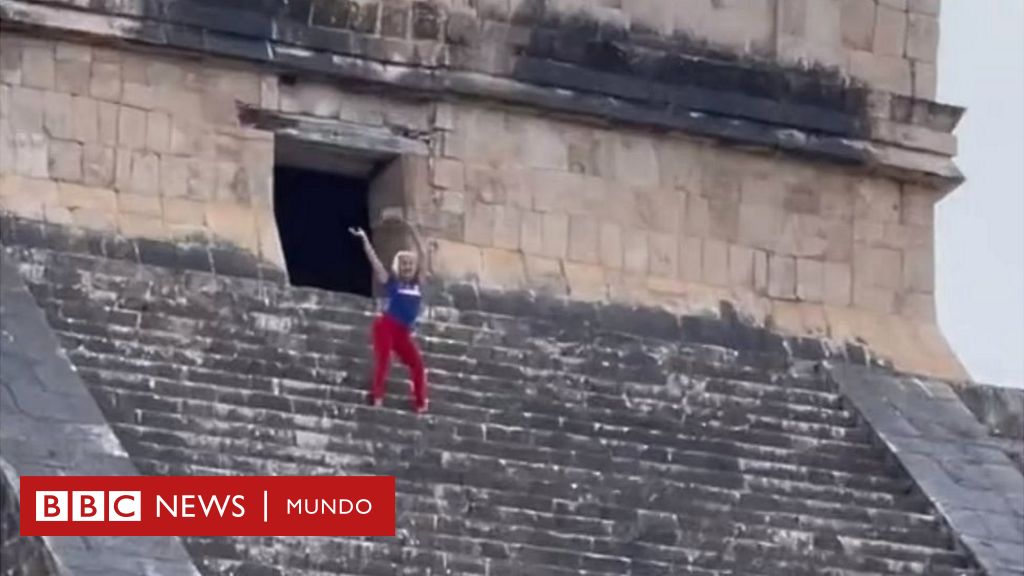 They are in the minority, but they are loud, offensive, and occasionally dangerous and damaging as well.

As tourism picks up again (thanks to the lifting of many covid restrictions), so do the enticing headlines about tourists misbehaving around the globe.

One of the most recent has been that of a woman who illegally climbed the top of a mayan pyramid nearly 1,000 years old in Mexico, before being mobbed by an angry mob and then escorted out by security agents, an instant viral hit on TikTok.

As the World Tourism Organization (UNWTO) asks visitors to “behave as they do at home”, we take a look at the most embarrassing tourist behavior in this 2022:

1. Dancing on top of a Mayan pyramid in Mexico

Climbing the 91 steps of the Mayan Pyramid of Kukulcán, in Chichén Itzá, has been prohibited since 2008.

It is a sacred site and was named as one of the New Seven Wonders of the World in 2007.

But on November 20, a tourist not only ignored the rule, she began to dance and entered the temple room that is in the upper part of the pyramid, built between the 8th and 12th centuries AD

As the woman, who has not been publicly identified, was escorted out of the site, other tourists who had witnessed her misdeed indignantly yelled at her, pulled her hair and threw water. Her “feat of her” was also widely condemned on social media.

According to local media, the woman was released from prison after paying a fine. The National Institute of Anthropology and History of Mexico (INAH) has announced in a statement that the pyramid was not damaged after the incident.

2. Crashing scooters and drones and stealing gondolas in Italy

Italy is one of the top destinations for international travelers and often the victim of their bad behavior.

In June, two American tourists launched their scooters down the steps of the historic Plaza de España, in Rome, from which they detached a 10 cm piece of marble. In a statement, the capital’s cultural heritage office said that the restoration of this monumental 18th-century site will cost US$27,000.

In April, an Argentinian visitor was arrested after losing control of his drone and crashing it into the 15th-century roof of the Palazzo Venezia (also in Rome). And, a few days earlier, two Mexican tourists hit the Leaning Tower of Pisa with a similar device.

In October, two Frenchmen were arrested on charges of stealing a gondola and dumping its decorations into a Venice canal in the middle of the night.

Only in 2022, 43 tourists were caught swimming in the city’s canals, something that is prohibited. The figure is a considerable increase from the previous year, when 24 swimmers were surprised.

In April, a Canadian man was deported and banned from visiting Bali again after posting videos on social media of him dancing naked on top of Mount Batur, an active volcano considered one of the island’s four holy mountains.

The tourist, who later deleted the videos and apologized for his behaviour, went viral on Bali’s social media, where He was accused of disrespecting the so, an important ceremonial ceremony in Maori culture.

“To all foreigners visiting Bali, please act accordingly by respecting our law and Balinese cultural values,” the director of the Bali Immigration Office said after the episode.

4. Striptease in front of the Sphinx in Egypt

On November 7, security at the Giza Pyramids in Egypt had to ask a woman to put on her clothes while trying to take nude selfies in front of the iconic Sphinx, believed to have been built between 2600 and 2500 BC

The Ministry of Tourism and Antiquities posted a statement about the episode on Facebook, saying that “removing clothing constitutes a violation of Egyptian laws, customs and traditions.”

After dressing again, “the tourist was able to complete her visit to the archaeological site without any obstacles,” Egyptian authorities said.

5. “Irreparable damage” due to graffiti in some petroglyphs in the US.

Petroglyphs are images carved or painted on stone surfaces by ancient civilizations, and they are very rare.

But that didn’t stop some tourists they will carve their names about some of the most important in Big Bend National Park, in Texas.

In a statement issued in January, the park said that “an ancient petroglyph panel in the Indian Head area of ​​Big Bend National Park was damaged beyond repair when vandals chose to live blatantly their names and date in this prehistoric art”.

“With every act of vandalism, part of our Nation’s heritage is lost forever.”

6. Arrested after giving the Nazi salute at Auschwitz

A 29-year-old Dutch tourist was detained in January after giving the Nazi salute at the entrance to the former Auschwitz-Birkenau death camp in Poland.

Later, the woman, who has not been publicly identified, was accused of participating in Nazi propaganda, having posed for a photo taken by her husband. The woman received a fine, which she agreed to pay.

The tourist assured that it had only been a joke in bad taste, according to the PAP news agency in Poland.

Nazi Germany built the death camp in the city of Oswiecim (Auschwitz, in German), in southern Poland, after occupying this country at the start of World War II.

In just over four and a half years, Nazi Germany systematically murdered more than 1.1 million people in this camp. Nearly a million were Jews.

What is being done to combat tourist misbehavior?

The United Nations estimates that 700 million tourists have traveled internationally between January and September 2022, an increase of 133% compared to the same period in 2021, but still below the influx of the first nine months of 2019 (63%). , before the pandemic.

As cases of tourist misbehavior increase, like the examples above, some cities and countries they are trying to eradicate it based on fines.

In cities like SorrentoIn Italy, tourists who wander through urban spaces in bathing suits will be subject to fines of up to $520, according to a measure introduced in July.

In Spain, the city of Vigo it will fine US$670 for those caught urinating on the beaches.

and the authorities of California They have announced a fine of US$5,000 and up to 6 months in prison for those who try to get close to see the tallest tree in the world, 115 meters high.

Visits to this natural monument are prohibited, but in recent times many tourists who have made the excursion to its surroundings have ended up damaging the tree.

“No one can support this type of behavior,” Marcelo Risi, director of the UNWTO, told the BBC.

“We are aware that the vast majority of tourists are hungry for new experiences, to travel and to learn about other cultures, and they behave well,” said the official, who is confident that “the awareness of consumers in general regarding to the footprint they leave, be it economic, social, cultural and environmental”.

And while he acknowledged that the examples in this story are “Isolated and unrepresentative cases”, Risi also offered a tip for tourists:

“The basic recommendation is very common sense: behave abroad as one behaves at home“.