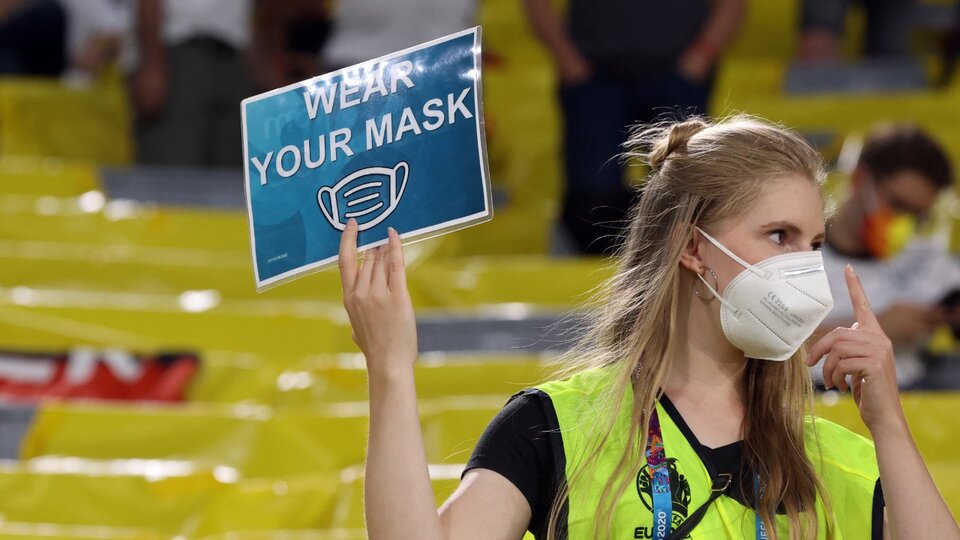 Coronavirus infections increased again in Europe due to the Delta variant and with alarming situations in the UK Y Russia. These countries are the ones that currently register the most new cases in Europe, with an average of 20,400 daily infections in the last seven days in Russia and 16,400 in the United Kingdom. The Delta variant, much more contagious than previous strains, it accounts for almost all new cases in both countries. In GermanyAlthough the situation with regard to covid-19 has remained stable in recent weeks, unease is growing due to the lack of coordinated health measures with other countries on the continent and the authorities They ask to reduce the number of spectators in the stadiums that host the Eurocup.

Russia records more than half of the new deaths on the European continent, with almost 600 a day on average in the last seven days. The european giant This Tuesday added 652 fatalities from covid-19, the highest death toll since the outbreak of the pandemic. Moscow is the most affected city, with 121 deaths and 6,209 new cases in a single day. Its mayor, Sergei Sobianin, again recalled that the Delta variant of the coronavirus is “more contagious and more deadly” than the rest.

In an attempt to slow the progress of the pandemic, the russian capital reimposed teleworking for at least 30 percent of unimmunized employees, made vaccination mandatory for workers in the service sector and created a health card for those who want to enter bars and restaurants.

Moscow authorities insist that a “rapid mass vaccination” must be carried out in order to stop the pandemic., since other measures such as confinement are provisional. So far only 22.2 million people have been inoculated, which equates to around 15 percent of the population. The immunization campaign has been delayed since December, in a striking context of distrust of the population towards vaccines.

According to the director of the Gamaleya Scientific Institute, Alexander Gintsburg, around 90 percent of the new cases of covid-19 that are registered in Russia are of the Delta variant. Russia, with 5,493,557 positives, is the fifth country in the world with the most infections behind the United States, India, Brazil and France. It also accumulates 132,314 deaths from coronavirus.

In the British territory the number of new deaths practically doubled in two weeks (from 10 a day to 17 last week), although the figure for now remains a long way from the peak in January, when more than 1,250 people died a day. The Ministry of Health notified 20,479 new infections of covid-19 on Tuesday, compared to the more than 22 thousand verified on Monday, in addition to 23 new deaths.

The brand new UK Health Minister, Sajid Javidstated in his first statement to the House of Commons on Monday that maintains the plan to remove all restrictions against the pandemic on July 19. “To be honest, no date we choose will be associated with a zero risk of coronavirus.. We know that we cannot eliminate it and we must learn to live with it, “said Javid, who took over from Matt Hancock, forced to resign after breaking social distancing in a scandal involving one of his collaborators.

The new head of the health portfolio admitted that the advance of infections, driven by the expansion of the Delta variant which represents 95 percent of infections in the country, is causing “an increase in hospitalizations.” In any case, Javid assured that this rise is “in line” with the figures that the Executive anticipated “at this point on the roadmap.”

“Our vaccines are working. Also against the Delta strain”, said the new minister, who estimates that Immunization saved 27,000 lives in the UK and prevented more than 7 million infections. “My task is to help restore the economic and cultural life that makes this a great country, while, of course, protecting lives and maintaining our public healthcare system,” Javid told the British Parliament.

Germany: criticism of the organization of the European Championship

The German authorities indicated this Tuesday that the Delta variant affects around 50 percent of new infections in the countryTherefore, any person who has not had the possibility of receiving the two doses of the vaccine “has to be tested regularly”, at least twice a week, and even more so if he returns from abroad.

In the case of travelers, the German government is in favor of intensifying sanitary controls upon arrival in the country of people from risk areas and additional “possibly mandatory” analysis to slow the advance of the Indian-origin variant.

Although it has a fairly favorable outlook compared to countries such as Russia or the United Kingdom, Germany expressed concern on Tuesday about the number of spectators that each Eurocup match calls. The German Interior Minister, Horst Seehofer, asked the British government and the Union of European Football Associations (UEFA) to reduce the number of fans allowed at Wembley Stadium.

“It seems irresponsible to me that tens of thousands of people congregate in narrow spaces in countries at risk from the highly contagious Delta variant”, as is currently the case in the United Kingdom, said Seehofer, also Minister of Sports, in an interview published this Tuesday by the newspaper Augsburg General.

In Germany, the matches are played at the Allianz Arena in Munich, where the maximum capacity is 20 percent: 14 thousand people. According to Seehofer, this percentage should serve as a general rule for the rest of the countries in which the cup is disputed.