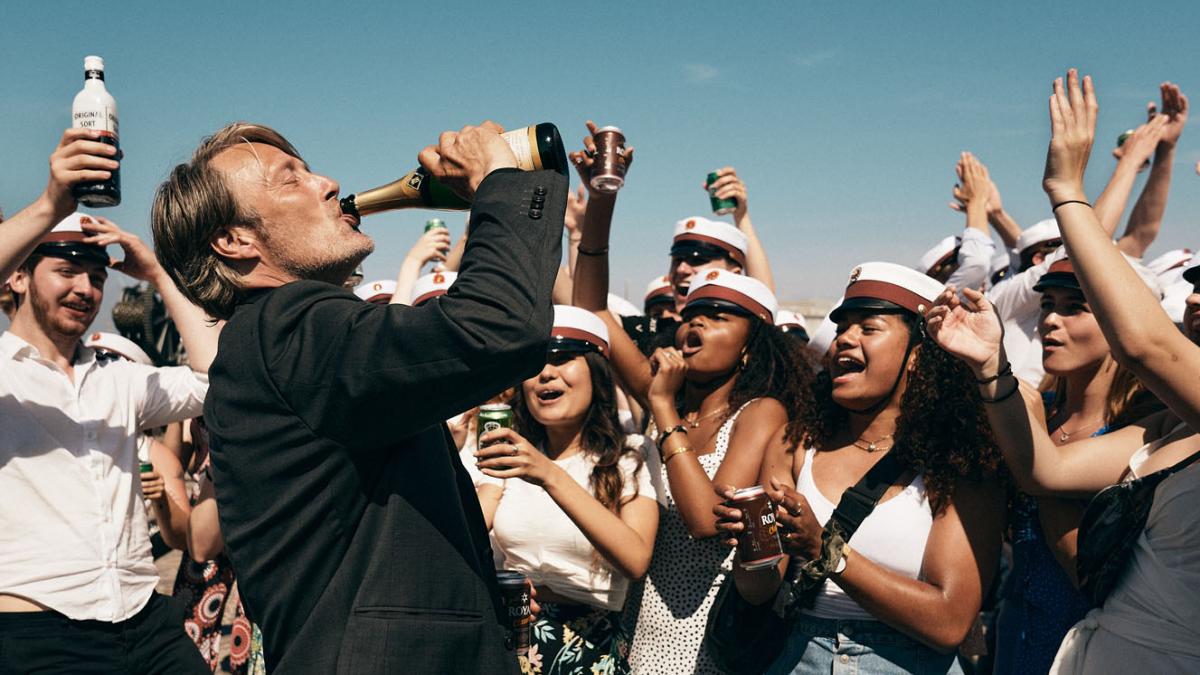 SScene 1: A working-class family lives happily in a simple house. The man comes home from work, everyone meets for dinner.

Scene 2: The man meets friends on the street who invite him to have a drink in a café.

Scene 3: Drinking and playing dice in the restaurant. The wife comes with the children and begs the husband to come home. He brutally pushes her away.

Scene 4: The family now lives in a rundown attic. The man is writhing on the floor in delirium tremens.

Scene 5: The man is wearing a straitjacket in a padded cell. In a fit, he tears his jacket and dances wildly around. Then he collapses and lies motionless.

Les victimes de l’alcoholisme, the very first film about the effects of alcohol, only had five scenes. Filmed based on the novel “The Blackjack” by Émile Zola, all the warning signals that the cinema should send out over and over again in the fight against alcohol were already shining in it. Now, 119 years later, for the first time a film seriously raises the question of whether alcohol could also have positive effects. Thomas Vinterberg’s “Der Rausch” comes from Scandinavia, of all places, which is known for its restrictive alcohol policy, more precisely from Denmark, which was not European football champions, but whose young people are European champions in alcohol consumption, statistically speaking.

The main characters of “Der Rausch” – original title “Druk”, ie “binge drinking”, English title “Another Round” – are friends in the midlife crisis, four teachers who once motivated their students could but feel burned out. One day Nikolaj, one of them, reports on the obscure theory of a philosopher that people are born with too little alcohol in their blood. He suggests a “scientific experiment” to his friends: Martin, Peter, Tommy and he should get drunk every day and keep a constant level of 0.5 per mille.

According to Thomas Vinterberg, it is an “experiment” with an open outcome. This is not at all the way in which cinema has always approached the subject of alcohol. In his 1917 film “The Cure”, Charlie Chaplin played a drunk who went to rehab with a suitcase full of liquor. He is discovered and a nurse (himself drunk) throws the bottles out of the window, where they end up in the healing spring, which leads to a general intoxication of all guests.

Not without a martini

It’s very funny, but the moral of the story is that a beautiful woman tells Charlie to stop drinking and doesn’t forgive him until he does. “The Cure” came in the middle of the great prohibition debate in the United States, and two years later the alcohol ban actually went into effect.

At the time, the abstinence movement saw film as an ally, because anyone who spent their free time in the cinema did not go to one of the whisper bars that mushroomed after the ban. That turned out to be a miscalculation, however, because Hollywood began to glamourize alcohol consumption in Prohibition. His rich and famous threw (intoxicating) parties, the (sexual) liberation of the flappers and garçonnes was always connoted with alcohol, and booze was inevitably consumed in jazz bars. In the mid-1920s, attempts were actually made to restrict the representation of alcohol to scenes that were indispensable for the plot. The recommendation was largely ignored.

Drinking itself became the symbol of the epoch, it stood for the individual freedom that one could not deny under the strict rules of the authorities. When the alcohol ban was lifted in 1933, the image of drinking in the cinema was virtually reversed. In 1934 the hugely popular “The Skinny Man” series began around the well-to-do couple of detectives Nick and Nora Charles, and solving the cases seems like a chore; Actually, the Charles’ greatest passion is to eat martinis and scotch: “This case clarification leaves me considerably behind with drinking,” complains Nick once.

That ended on November 29, 1945. On this day, Billy Wilder’s “The Lost Weekend” was premiered, which brings up all the horrors that belong to alcohol addiction: the humiliation of procurement, the devastation of your own apartment in search of the missing whiskey bottle, the hallucinations, the agony of withdrawal, that delirium tremens, the suicide attempt.

The film won four Academy Awards, and that left the glamor of alcohol undone for decades; instead, we were led by dramas such as “The Days of Wine and Roses” (with Jack Lemmon) and “Leaving Las Vegas” with Nicolas Cage (who was filmed drunk in preparation for the shoot in order to observe his condition and learn from it ) the horreurs of the alcohol in mind.

What happened in parallel, however, is illustrated by a scene from “Star Trek Into Darkness”. “Are you drunk?” Asks Captain James T. Kirk his brave flight engineer Scotty, whom he reached by phone. After a cut, we see Scotty in a noisy bar with a futuristic-looking bottle of beer next to him. The brand is clearly recognizable: Budweiser.

Drinking found its way back to the screen via two back doors: via product placement and the celebration of “lifestyle”, which is ultimately also instigated by advertising. James Bond has always drunk, rather watery vodka martinis, but as a statistician recently found, Sean Connery was satisfied with an average of eleven drinks per film, while Daniel Craig already had twenty.

In “Cocktail” Tom Cruise glorified the job of simple bartender to master mixer. In “Sideways”, Paul Giamatti went on a drinking tour through California wineries, condemned Merlot and glorified Pinot Noir, whereupon its sales almost doubled. A quarter of a century after the movie, men are still ordering “White Russian” in memory of the dude in “The Big Lebowski”. Films like “National Lampoons Animal House”, “Beerfest” and “The Hangover” celebrate the camaraderie of male binge drinking.

“Der Rausch” celebrates nothing, although Vinterberg originally wanted that. He lets his quartet drink to 0.5 per mille and observes: All four bring new momentum to their professional and private lives – but one will end tragically. “The intoxication”, and that is what makes it so incomparable, does not affect any of the irreconcilable sides. And helped Vinterberg to win the Oscar for best international film and Mads Mikkelsen to a final scene that will forever be associated with his name.