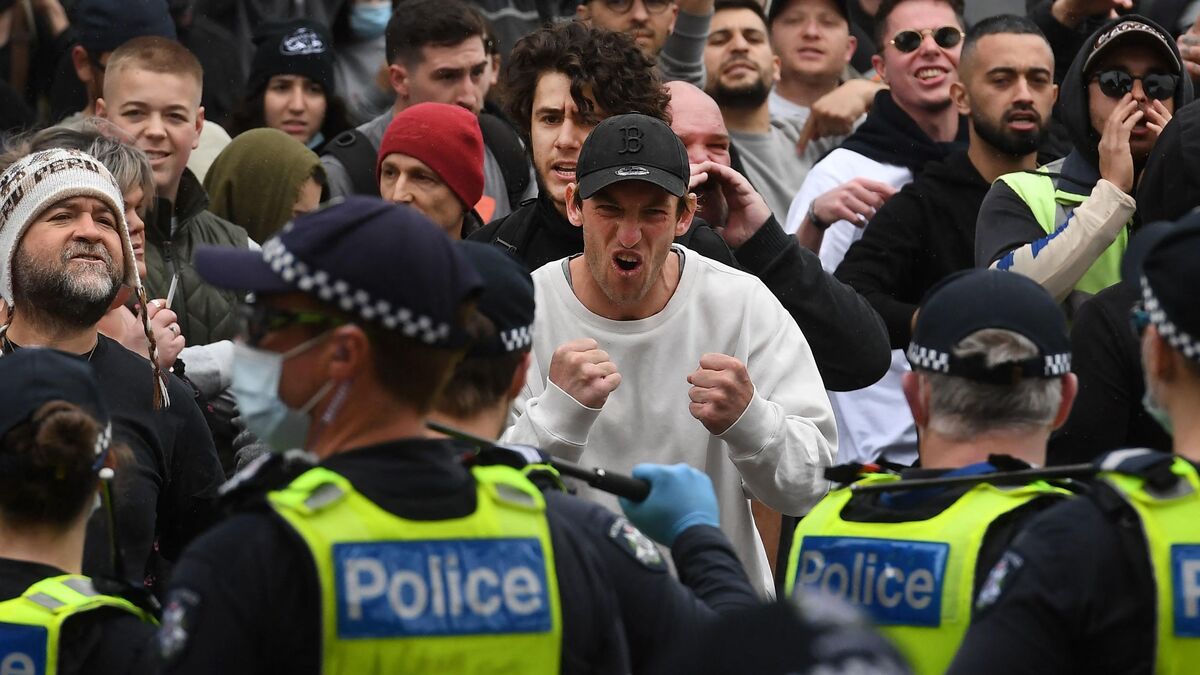 12:37. First medical evacuation from Tahiti to the mainland. The plane carrying ten Covid-19 patients will travel 16,000 kilometers in total this Saturday. He will make a stopover at Pointe-à-Pitre in Guadeloupe. It is “a safe solution”, indicates on France Info Professor Pierre Carli, in charge of the evacuation.

12:12. More than 200 arrests in Melbourne during an anti-containment rally. Hundreds of protesters were arrested and police injured on Saturday in Melbourne, Australia, in violent clashes with protesters opposed to the lockdown.

The police used pepper spray and made more than 200 arrests, in the second most populous city of the country where hundreds of people violated the obligation to stay at home to demonstrate.

Melbourne is experiencing its sixth lockdown since the start of the pandemic and the state of Victoria, where it is located, recorded more than 500 cases of Covid-19 on Saturday. Police said six policemen were hospitalized after being shot and stepped on during clashes with some 700 protesters.

11:44 am. Too few in number, exhausted Philippine nurses are fighting the Covid. Exhausted, Filipino nurses scramble to treat Covid-19 patients, unsuccessfully trying to make up for a glaring shortage of staff. Many of their colleagues are absent after contracting the coronavirus or leaving the profession even before the pandemic.

The archipelago is recording a record increase in cases of contamination, linked to the Delta variant, and the Ministry of Health reports a shortage of more than 100,000 nurses.

11:23. England eases entry conditions for vaccinated people. From October 4, vaccinated travelers who do not come from a country classified as “red” will no longer need to take a test before entering UK soil. Read here.

10:59 am. Deconfinement in Reunion. The restriction on travel more than 10 km from home is completely lifted from Saturday, September 18 in Reunion, where the curfew is pushed back from 9 p.m. to 11 p.m.

10:45 am. Moderna vaccine superior to Pfizer against severe forms, study finds. In the first weeks, the protection is equivalent, but the gap widens quite clearly over time, says the main health agency of the United States. Our subject to read here.

10:23 am. Guantanamo Bay trial suspended due to Covid. The trial of suspected 9/11 mastermind Khalid Sheikh Mohammed and four other defendants was suspended on Friday due to a Covid alert at the military tribunal at the US naval base in Guantanamo, Cuba.

According to a court official, the presiding judge decided to suspend the preliminary hearings after being informed of a confirmed case of Covid among journalists who covered the hearings last week.

10:17. “We ask the State to protect us”: the appeal of doctors to ensure the safety of caregivers who have become “targets”. In a column published by Le Parisien – Today in France, the #StopMenaces collective, made up of health professionals and scientists, demands that the scientists most at risk in the context of the Covid-19 health crisis can, they wish it, to benefit from police protection or a bodyguard. Read here.

Resuscitation services were overwhelmed by Covid cases in July in Tunisia, the country which paid the heaviest price in the Maghreb with around 24,500 dead. The peak of contaminations occurred between July 7 and 13 with more than 55,000 cases, against seven times less today. Deaths are also down sharply with 342 deaths over the past week, five times less than the peak (1,451 deaths, from July 24 to 30).

Morocco, which deplores nearly 13,800 deaths from Covid, is the most advanced country in the Maghreb in vaccination, with nearly half of complete vaccination courses (46.7%).

With an official death toll of 5,650, Algeria announced in early September “a major campaign” targeting 70% of vaccinated by the end of the year. As of September 16, 13.3% of the nearly 44 million Algerians had received at least a first dose but only 9.5% had a complete regimen. The main foci of infection have been identified in the districts of Algiers, Blida, Tizi Ouzou and Oran.

9:34. UN: a hundred leaders expected in New York despite the pandemic. A hundred leaders are expected next week in New York, despite fears related to Covid-19, for the Annual General Assembly of the United Nations whose leader wants to launch a “cry of alarm” in the face of the “very dangerous ”of the world.

9:25 am. Theft of medical data: Paris hospitals apologize and warn victims. The health information of about 1.4 million people screened for Covid-19 in 2020 has been stolen. Our subject to read here.

9:11. Online sales, diversified wines: wine fairs confirm their transformation. Boom in online sales, modification of the ranges offered … In the fall of 2020, the traditional wine fairs had to adapt to the health situation, and the changes seem to be confirmed this year.

The September-October period remains a highlight for the purchase of wine by individuals. But wine fairs, imagined by supermarkets in the 1970s, have been on a declining slope in recent years, in particular due to competition from beer.

Even in 2020, when bars and restaurants had been closed for part of the year due to Covid-19, leading the French to consume more at home, sales during this period had suffered. The turnover from August 24 to October 11 had thus fallen by 1.3% compared to 2019, according to the firm NielsenIQ, amounting to some 904 million euros.

9:05 am. Gendarmes, bodyguards … in the middle of a vaccination campaign, doctors under protection. More and more caregivers involved in the vaccination campaign are the target of threats of antivax or violence. Some are protected by the gendarmerie or have even hired a bodyguard. Our revelations on this edifying drift to read here.

At 2 p.m., the demonstration of the Patriots, led by Florian Philippot (ex-number 2 of the National Front, which has since become the National Gathering), will move from the Place du Trocadéro in the 16th arrondissement towards the Champs de Mars (7th).

8:41 am. Polynesian tourism fears the future. The tourism sector, crucial for Polynesia, has once again been hit hard by the Covid-19 crisis since the end of July, and companies fear they will not be able to go up the slope despite the gradual deconfinement.

Financially, not only “we did not work”, but in addition, we must “reimburse the cruises”, because if two or three clients have accepted postponements, Tahiti Liberty Cruises, a small cruise ship company, “faces the challenge. to massive cancellations, ”explains its manager Richard Salmeron.

8:26 am. Biden is hosting a virtual Covid-19 summit on Wednesday. US President Joe Biden will organize a virtual summit on Covid-19 on Wednesday, on the sidelines of the United Nations General Assembly, announces the White House.

“This meeting aims to broaden and strengthen our joint efforts” and “align with a common vision to defeat Covid-19,” said Jen Psaki, the spokesperson for the White House, in a statement . It “will build on previous meetings of leaders and ministers from around the world” at the G7 or G20.

7:55 am. Tenth Saturday of demonstrations against the health pass. For the tenth consecutive week, 180 demonstrations against the health pass are scheduled for this Saturday in France, while President Emmanuel Macron is considering the lifting of certain constraints, in the face of the decline in the Covid-19 epidemic. These mobilizations come when the symbolic milestone of 50 million people who have received at least one dose of vaccine against Covid-19 has been reached.

7.40 am. The United Kingdom eases its travel conditions for the vaccinated. The British government announces an easing of entry requirements to England for vaccinated travelers. From October 4, they will no longer need to take a test before leaving a country that is not on the red list, said Transport Minister Grant Shapps. Then at the end of October, the PCR test required on the second day after arrival on English soil will be replaced by a “less expensive” antigen test.

7:20 a.m. Hello everyone. Welcome to this live dedicated to the pandemic of Covid-19.