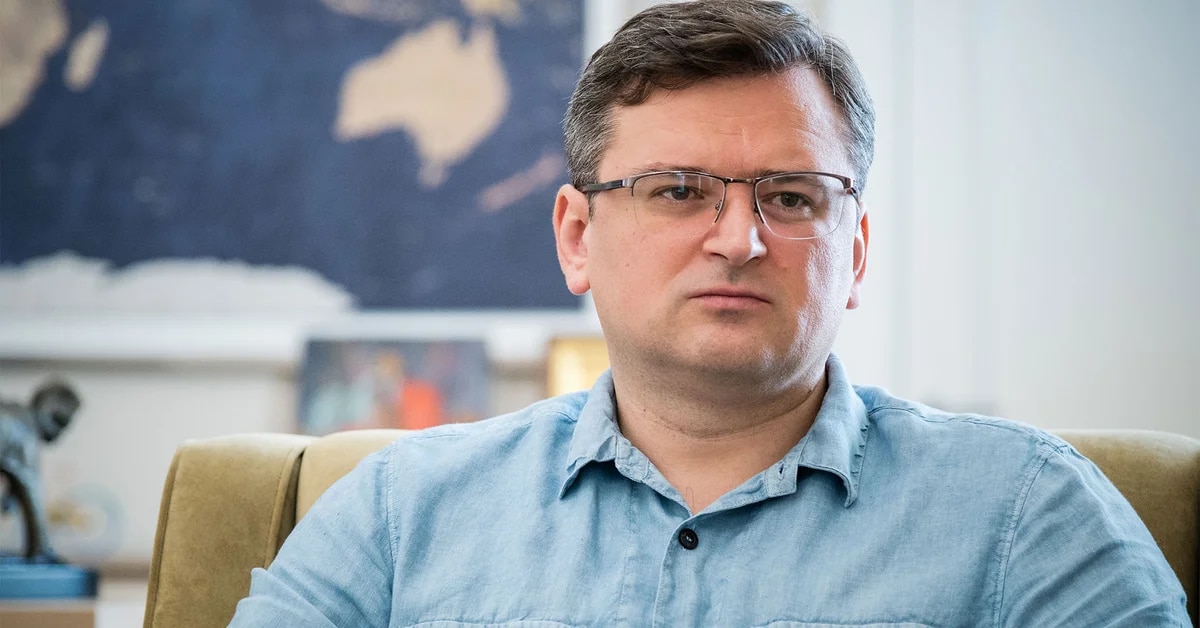 Dmytro Kuleba was born in 1981, and has been linked to foreign policy since his years at the University of kyiv. He has a fluid personal relationship with President Volodimir Zelensky, and faces the most important challenge of his diplomatic career. He maintains that Ukraine will end the war when it recovers all the territory that Russia annexed and sounded disappointed when he commented that Pope Francis had not yet set a date for his long-awaited trip to Ukraine.

It was the evening of kyiv, when Kuleba picked up the phone – together with his spokesman Oleg Nikolenko – and answered all the questions about a conflict that Ukraine did not cause and causes a tragedy reminiscent of the years of World War II.

-Are you satisfied with Argentina’s support for Ukraine?

-The answer has two parts. We are grateful and satisfied with the support that Argentina offered to Ukraine within the framework of the EU.: joined the condemnation of Russia’s military aggression against Ukraine. But at the same time we wanted to see stronger support at the bilateral level in our efforts to stop aggression against a sovereign country in Europe. At this point I want to remind you that Argentina is the second home for more than 400,000 Ukrainian immigrants. So supporting Ukraine, its politicians, the government of his country, he will also pay tribute to all the efforts of Ukrainians living in Argentina to help develop their beautiful country.

-Do you think Argentina should have worked closer to Ukraine?

-When the government of Argentina recognizes that international borders must be respected, it wants the world to be governed by rules. And so, should be able to work more closely with us, because this is what we are fighting for.

-How is the illegal war that Russia started against Ukraine going to end?

-The war will end when Ukraine achieves the 1991 borders, restoring the country’s territorial integrity. That is our goal.

– Do you think it is possible if Vladimir Putin remains in power?

–It is not an easy question to answer. Of course, it will depend on many factors, including the pressure of sanctions, including political military aid, and the situation on the battlefield. There is nothing unusual about the idea of ​​defeating Russia. Indeed, after all that Russia has done, the best way to put her in her place is to defeat her on the battlefield. Let the Ukrainian forces show you how to do it. But we know that Putin is a war president and he is very interested in continuing the war.

-But leaving power is key to ending the war or is it just one more factor…?

-I think that when Putin leaves the Kremlin, one way or another, because we are not the ones who have to decide that… It will be God or the Russians who decide the way in which he should leave power…But of course, while he was in his place it was more difficult to end the war. But it is not impossible if we have enough sanctions pressure and military and political support for Ukraine, we will be able to reach the goal.

-How do you evaluate the economic and financial cooperation of the European Union (EU) and the United States, in addition to the shipment of weapons and intelligence support?

-While the war continues, of course we will need more. I will be clear: the G7 countries and the EU support us and do a lot, really a lot, to help us. They are not doing it just because they support us, but because they understand that Russia’s attack on Ukraine is also an attack on the international order.

– Do you think that the beginning of the cold of winter and the increase in the price of hydrocarbons can benefit Russia’s diplomatic and war strategy?

-Russia has always used energy as a weapon. And in Ukraine we have always insisted to our partners that they should not be addicted to Russian oil and gas. Now, finally, our European friends have accepted our point of view. Of course, it is a difficult process for them to restructure their energy supply and they may have to go through difficult times. But in the end they will be stronger and healthier as economies and societies, so they are doing it not only for us. They also do it for themselves.

– Do you think that the crimes against humanity committed by Russia in Ukraine can be condemned?

-If possible. And Ukraine works with international courts to make sure that happens. It will take time. International justice is never quick. We will work tirelessly to make Russia accountable for this and we hope that Argentina will support us.

Bucha Cemetery, on the outskirts of kyiv. One of the cities devastated by Russian troops at the beginning of the invasion of Ukraine

-What role do you think China is playing in the conflict between Russia and Ukraine?

–China’s position must be considered from two perspectives when explaining the origins of Russian aggression against Ukraine. The Moscow and Beijing interpretations are very close to each other. However, when it comes to actually supporting either side of the conflict, China demonstrates neutrality. So far we do not have the information indicating that China provided military support to Russia in its war effort against Ukraine.

-How can the crisis at the Zaporizhzhia nuclear plant be resolved?

-The only sure solution to this crisis is the total withdrawal of the Russian armed forces from the Zaporizhzhia nuclear plant and the return of the Ukrainian authority over this nuclear power plant. Russia is going to use this plant as a pressure against the world. I know that Russia is resorting to the tactics of nuclear terrorism against the planet.

-And in this context, what does the United Nations (UN) do on the subject?

-We invite the UN to send a mission to the plant to assess the situation on the ground, including UN military experts. And we hope that this mission will be carried out and that some representatives of the United Nations will stay at the nuclear power plant and contain the possible destructive measures and the steps that Russia intends to do.

–Do you think it is possible to achieve a negotiating table between Russia and Ukraine with the participation of Pope Francis?

My president, Volodimir Zelensky, spoke with the Pope. We Ukrainians respect the Pope very much.. And he is a great moral authority in our country. It is with deep regret that we learn that the Pope will not come to Ukraine yet. We will welcome any mediation efforts by the Pope. But we hope that Russia will accept the good offices of the Pope, but that should not serve as an excuse not to visit Ukraine and the millions of supporters of the Pope in our country.

Is there a date for the pope’s visit?

–No, unfortunately not. we asked him to come, we invited him, but we did not have a positive response from the Vatican. We hear on the contrary that you are planning a visit to Kazakhstan which is much further from Rome than Ukraine and we are disappointed to hear that, but it is not for us to judge. Once again, millions of Ukrainians will welcome the Pope here in Ukraine if he decides to come.

a common chemical is thought to be responsible for the disease