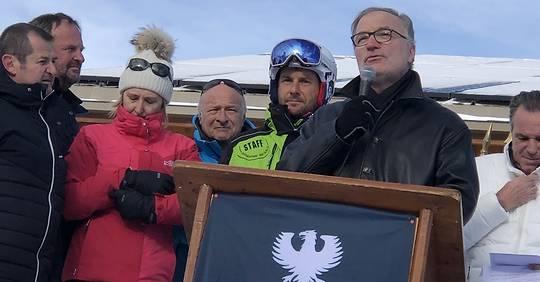 Tuesday evening, in front of his TV, Dominique Marcel was still a little divided. The CEO of Compagnie des Alpes, which manages eleven ski resorts (Les Arcs, La Plagne, Tignes, Val d’Isère, Méribel, Serre-Chevalier, etc.) and amusement parks (Parc Astérix, Futuroscope, etc.), still hoped a little. Emmanuel Macron had just said that it seemed impossible to him to open the ski lifts at Christmas, which suggested that it would be possible… Two days later, it’s a cold shower.

“All the ski lifts and public facilities will be closed to the public”, assures the Prime Minister, Jean Castex, while encouraging the French to go to the resorts “to enjoy the pure air of our beautiful mountains” … The boss the world leader in ski areas says he does not understand the government’s “inconsistencies”, nor its “haste” in wanting to ban skiing when the health situation seems to be improving. Dominique Marcel is obviously also worried about the consequences on the results of his company. “Christmas is 15 to 20% of the activity of the Compagnie des Alpes which is sacrificed”, he says. However, the CEO of Compagnie des Alpes continues to hope a little. He explains himself.

Read also Covid-19: is it reasonable to ease the confinement on Saturday?

The Point: The winter sports resorts are not quite, in the eyes of the government, villages like the others. Do you understand this point of view?

Dominique Marcel: What distinguishes a ski resort from another village in France? Admittedly, at Christmas there will be a little more people in the streets of the stations than usual, but the tourist population at Christmas is mostly family, few young people come among them. And attendance remains limited. The bulk of tourists are there during the February and Easter holidays. We are told: “Yes, but people come to party, especially on the evening of December 31”. But I would remind you that bars, restaurants and nightclubs will remain closed, in the stations as everywhere else in France. This is all surreal! There is also a problem of consistency between the decisions announced: how to explain that theaters and cinemas, closed spaces, reopen, which I am delighted with, when winter sports resorts cannot? We are going to open the Grévin museum, which we manage, but as you know it does not offer quite the same spaces as in Tignes! Another inconsistency: the government encourages people to go to the stations anyway, the SNCF therefore announces that the TGV will be insured, but you really believe that the risks of contamination are less in a well-used train than in a ski resort?

The risk of contamination, which explains this closure, is it not also present in the ski area, and in particular in the queues of the ski lifts?

In all the meetings we attended with the authorities, we were told that the health protocols were very good. This explains the extent of our disappointment. But we also regret the lack of consultation. We pleaded with the public authorities so that no decision is taken for two to three weeks, time to assess the evolution of the health situation, which is more favorable day after day. We were ready to open the stations, we could push the button around December 15, depending on the state of the epidemic. We therefore do not understand this rush to refuse the opening. There is really still time to wait as the situation continues to improve. All mountain professionals feel they have been cheated.

Read also Containment: the pearls of our trip to “Absurdistan”

Another explanation lies in the congestion of hospitals likely to accommodate injured skiers. In Savoie and Haute-Savoie, the number of patients affected by Covid is indeed significant …

The vast majority of injured skiers are not referred to the hospitals that take care of these patients, and hardly ever in intensive care. It is above all the medical offices that take care of them. We have also discussed with private clinics and other private health establishments in the region so that they can accommodate the injured on the ski slopes. Again, it would have been wise to wait a few weeks to make a decision regarding the situation in the hospitals.

The government explains that it is necessary to harmonize decisions at European level, so that all countries are on the same line. However, Germany does not intend to reopen its stations at Christmas …

So far no decision has been taken. France may want to take European leadership on this issue, but Germany does not have to give the the. The weight of this country in activities related to skiing is low, unlike Austria and France, which are the two countries of the European Union where the number of days / skier is the most important.

If the amusement parks remain closed during the next vacation, it will be double the penalty.

Amusement parks are currently subject to the same closure regime. Are you hoping, here too, to change the government’s mind?

Yes, we hope to be able to reopen them for the holidays. Jean-Baptiste Lemoyne [secrétaire d’État chargé du Tourisme, NDLR] is sensitive to our concern. There again, I do not understand the logic of keeping them closed: at Parc Astérix, the density is 40 square meters for 10,000 visitors, which is much more than the standard of 8 square meters per customer imposed in other activities … Amusement parks remain closed during the next holidays, it will be double the penalty. Last year, Parc Astérix and Futuroscope welcomed 250,000 people during this period. We will ask for several forms of compensation. But for now, we continue to fight. We still hope.

Read also Covid-19: why Macron will never lock up the “old people”