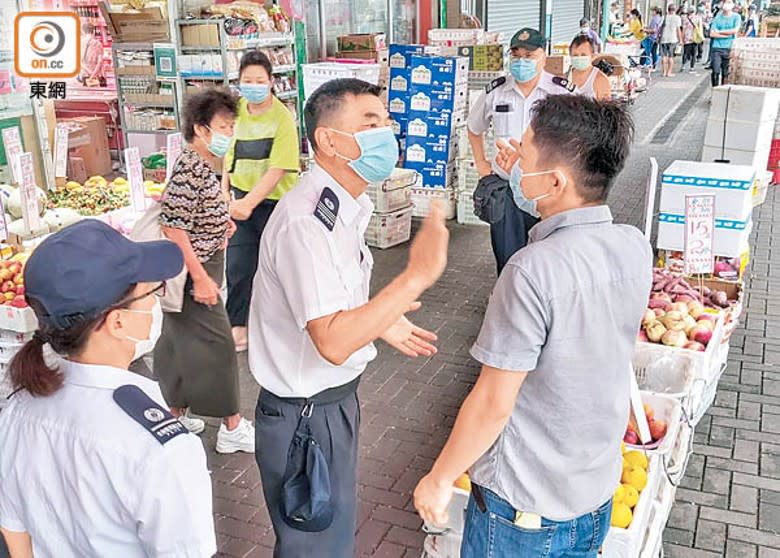 While the COVID-19 epidemic has been rebounding recently, food safety issues have also attracted attention from all walks of life, but the Food and Environmental Hygiene Department has “not kicked or depressed”. This newspaper has repeatedly exposed the incident of rats eating pig shells. Last Saturday, we exclusively reported on a grocery store that also sells pork, vegetables and fruits on Choi Hung Road, San Po Kong. A pile of pig shells were left outside the store for more than two hours, but no one handled it. , After the FEHD sent staff to the store to investigate that day, no one was found to have placed the pig shells on the ground, and said that it would follow up and investigate seriously.

Street blocking tickets are also accepted at nearby shops

The Food and Environmental Hygiene Department dispatched about 20 people to the scene yesterday morning, and dispatched cleaning workers to clean the streets in and around the store. During the period, the store and other businesses involved placed a lot of goods outside the door, and the staff advised the staff to put the goods back into the shop. , the clerk moved the goods back into the store, and the staff issued a street obstruction ticket to the store involved and other stores. When the reporter arrived at the scene yesterday morning, the store did not see the pig shells placed outside the store.

Last Saturday morning, typhoon signal No. 8 was hoisted in Hong Kong, and some neighbors passed by the door of the grocery store involved. From 7:00 to 9:00 in the morning, that is, for at least two hours, a pile of live pig shells was still placed outside the door. At that time, the whole street was wet and dusty, and it was believed that the pork had already been contaminated. The pig shells are only placed on the bottom of the canvas and placed in the open air at the end of the street, and the sanitary environment is poor.

If the mouse ever bites the disaster from the mouth

Neighbors also pointed out that the above address is famous for many flies and mice, and even suspected that there would be mice eating pig shells, worrying that “disaster comes from the mouth”, and criticized the store for knowing that they had closed their doors to thank customers that day, so they should cancel the delivery instead of letting it go at will. Goods are left outside the door, giving neighbors a chance to buy contaminated pork. Neighbors nearby also expressed their unacceptability of the store’s practices. They were worried about food safety issues. They also pointed out that the store often placed sundries and styrofoam boxes everywhere, blocking the footpath. Although the FEHD issued tickets many times, the situation still persisted. no improvement.

According to the new licensing conditions of the FEHD, all fresh, chilled, chilled meat or poultry, whether prepackaged or not, delivered to licensed fresh provision shops for sale shall be delivered directly to licensed fresh provision shops unless alternative arrangements have been approved in advance in writing. into the premises. At no time shall lien or deposit off premises (including any street, sidewalk, alley, passage and place) for further processing or sale.

Delegations from 40 countries discuss “Marshall Plan” for Ukraine in Lugano

Japan shares rise at the close, supported by the utilities sector | latest news