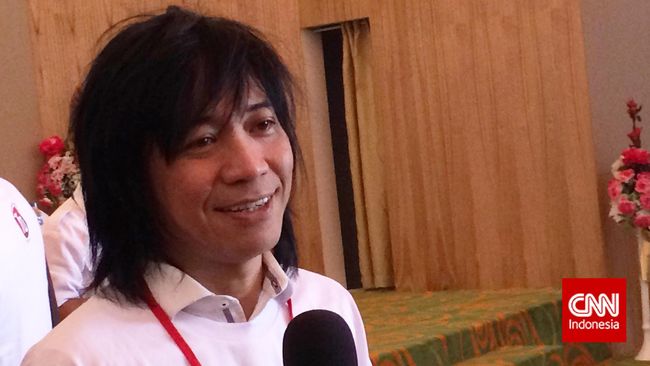 Main Expert Staff of the Presidential Staff Office (KSP) Ade Irfan Pulungan stated the appointment of Abdi Negara Nurdin alias Abdee Slank as Commissioner of PT Telkom Indonesia (Persero) Tbk should not be underestimated because it is a figure needed by the state-owned company.

Ade also regretted the accusations by a number of parties who considered Abdee’s appointment because she had been a volunteer for Joko Widodo-Ma’ruf Amin in the 2019 election.

He considered that Abdee was the right person to serve as commissioner because the guitarist of Slank was a visionary and hardworking figure, especially in facing the era of digital disruption.

“Not too fast underestimate (underestimate) the figure of Abdee Slank. He is a visionary and creative figure who is really needed,” he said in a release received CNNIndonesia.com, Sunday (30/5).

Ade added that Abdee’s vision and creative ideas are needed by the company in facing business challenges in the digital era.

According to him, Telkom is not only a technology company engaged in telecommunications equipment and infrastructure, but also in the creative industry. He gave an example of Telkom’s subsidiaries engaged in cellular content, e-commerce, and others.

He believes that Abdee can contribute in the form of input that the company has never thought of before.

Ade also mentioned that Abdee has a lot of business experience, both in the music industry and digital technology, as well as social and environmental.

Some of Abdee’s experiences described by Ade are joining the Expert Team of the Directorate General of Intellectual Property Rights at the Ministry of Law and Human Rights for the creation of the Copyright Law & the establishment of the National Collective Management Institute (LMKN) in 2013 and becoming a member of the National Waste Management Supervisory Agency, Ministry of LHK in 2016.

“So the public’s assessment of Abdee Slank should be objective. I, as the former Director of Legal and Advocacy for the National Campaign Team (TKN) during the 2019 Presidential Election, asked the public not to be trapped in the dichotomy of Jokowi or Prabowo supporters again,” he said.

Although the appointment of Abdee as Telkom’s commissioner was criticized by a number of parties, a positive response was conveyed by musician Anang Hermansyah.

Anang denied the accusations from various parties that the appointment of Abdee was an act of dividing up positions.

“If this is said to be a division of positions, it is only people who think negatively who have these bad thoughts. But if this is a positive thought, is he (Abdee) worthy or not? Worth it,” said Anang.

Anang also assessed that Abdee is a person who has the capacity to occupy this position. He also did not deny that the appointment of Abdee was the result of supporting Jokowi’s struggle.

“His struggle must have implications, because (Abdee) also has expertise. So, people who make fun of Abdee are people who are hurt, because they can’t afford it, that’s just how hurtful they are. It’s simple,” said the former member of the Indonesian House of Representatives.

As is known, SOE Minister Erick Thohir appointed Abdee Slank as Commissioner of PT Telkom Indonesia Tbk (Persero) through the Annual General Meeting of Shareholders (AGM) which was held on Friday, (28/5).