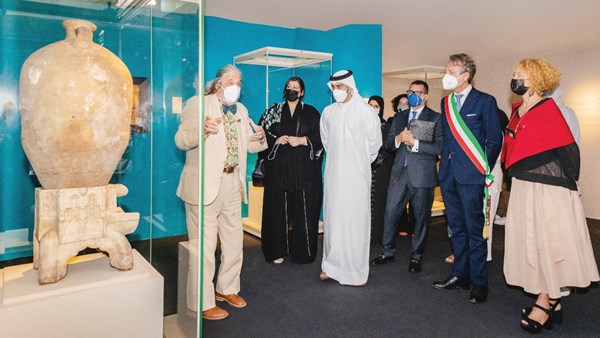 Under the patronage of His Highness Sheikh Dr. Sultan bin Muhammad Al Qasimi, Member of the Supreme Council and Ruler of Sharjah, the Sharjah Museums Authority inaugurated yesterday, Wednesday, the exhibition “Drop after drop, life falls from the sky: Water, Islam and the arts”, which it organizes, from June 9 to On December 11, at the Sharjah Museum of Islamic Civilization.

120 artworks
The exhibition was inaugurated by Sheikh Khalid bin Essam Al Qasimi, Chairman of the Department of Civil Aviation in Sharjah, and was inaugurated with a manuscript of the Qur’anic verse “And We made from water every living thing.” Islam, and in people’s daily lives.
The event offers 120 historical collections and artworks of different civilizations from several museums in Italy that have never been shown outside, including a collection of collections from Italian public and private museums, and the participation of pieces from the permanent collection of the Sharjah Museum of Islamic Civilization and the Sharjah Art Museum, distributed over four axes: Grace Water and Islam, water and daily life section, traditional hammam, and gardens section.

Historical Developments
The exhibition deals with the strong presence of water in Islamic heritage and civilization, starting from its mention in Qur’anic texts that set rules for the investment, development and preservation of water, to its role in creating a civilization rich in architecture, literature, philosophy and music, where it sheds light on points of similarity and cultural and regional differences, through exhibited holdings. .
He reviews traditional baths with their health and social implications, while concluding his journey in the open air, in the contexts of investing water in agricultural engineering and gardens, reaching the countryside and oases, by presenting pictures, archaeological findings, manuscripts and miniatures, intertwined with technology, ordinary life and art thanks to the element of water.

message of hope
In addition, Nicola Lehner, Italian Ambassador to the UAE, said: “I am honored to welcome the first Italian-Emirati exhibition, which represents an important step in the path of cooperation between two distinguished and large cultural institutions, the Turin Museums Foundation and the Sharjah Museums Authority, which sends a message of hope and encouragement to our country. ».
He added, “Our relationship with the Sharjah Museums Authority is strengthening through the exhibition, which focuses on the element of water, as one of the valuable assets that must be protected, and lays the foundation for every civilization in the world based on the dynamics and methods of water transportation and distribution.”

human dialogue
For her part, Manal Ataya, Director General of the Sharjah Museums Authority, said: “The exhibition is the fruit of our first cooperation with the Turin Museums Foundation, with the aim of shedding light on the historical relations linking Italy with the Islamic world.” She added: “We are committed to strengthening our partnerships with prominent international institutions in order to bring collectibles that have not been seen before in the UAE and the entire region, which have played a pivotal role in shaping human life throughout the ages.” Ataya stressed the Sharjah Museums Authority’s commitment to promoting cultural dialogue, because of its role in advancing human thought, social cohesion, and creating opportunities for creativity, by providing knowledge resources and learning opportunities for all members of society.

Life’s secret
In turn, Ida Zilio Grandi, Director of the Italian Cultural Institute – Abu Dhabi, confirmed that Islam focused on water, as the word water was mentioned in the Holy Qur’an with diversity and repetition, as it is a motivator of life and an example of God’s mercy, and a form of His care and provision.
The exhibition is one of a series of rich exhibitions organized by the Sharjah Museums Authority throughout the year to promote the cultural movement in the Emirate of Sharjah, through which it hosts a group of artists and creators, with the aim of consolidating the role of arts and culture in advancing the civilized human dialogue.

valuables
The exhibition “Drop by Drop” presents, through its four sections, collectibles that reflect the uses, arts, culture and history of Islamic civilization, including the bowl of King Nasir al-Din Muhammad ibn Qalawun from Egypt or Syria, made using brass and decorated with gold and silver in the first half of the 8th century AH / AD AD 14, a large jug and bowl made of Ottoman tombak by gold-plated copper in the AH 13th / AD 19th century, and a bronze jug that includes bronze formations, and animal-shaped gold ornaments, designed in India. The artifacts exhibited by the event also include a kilja (a water jar holder) made in Egypt during the 4th or 5th century AH / 10th or 11th AD, resting on four spaced legs.
It presents an oil painting under the title “The Nubian Boy” by Arthur von Ferraris in 1936, a portable water seller’s jar made of brass and engraved porcelain designed in Egypt in the AH 13th / AD 19th century, and ten Egyptian-made water filters designed in the 6th century AH / 19th century AD. 12 AD, and displays an unglazed pottery jug believed to have been designed in Syria or Iran in the AH 7th / AD 13th century. It displays seven nozzles of fountains designed in Arab countries, and a wall panel woven with wool and silk threads from the city of Banja Luka, in Bosnia and Herzegovina, designed in the first half of the AH 13th / AD 19th century.

Seminar on the sidelines of the event
On the sidelines of the exhibition, the Sharjah Museums Authority is holding a symposium entitled “Drop after drop, life falls from the sky. Water, Islam and the Arts”, on Saturday, June 12, at the Sharjah Museum of Islamic Civilization, and the session, which will be broadcast on the authority’s YouTube channel, will discuss the historical development of the role of water and its creative embodiment in ancient Arab and Islamic arts and antiquities, represented in the four axes of the exhibition: The blessing of water. Islam, water and daily life, traditional hammam, and gardens.