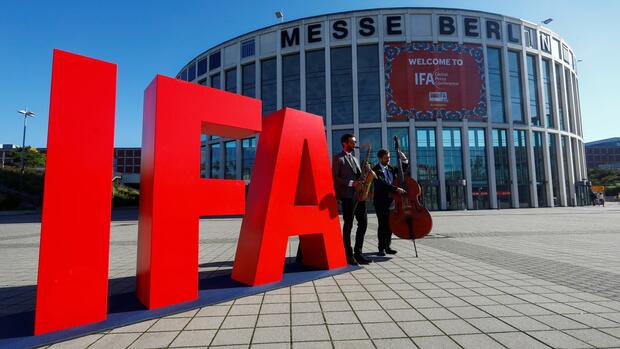 Düsseldorf You don’t have to be a corona denier to find masks a nuisance, it gets warm and stuffy under the fabric. There is a remedy for those who do not want to come to terms with this.

Of the Electronics company LG Electronics has developed a blower air purifier that can be strapped to your face – which, they say, should help you breathe. After medical staff, private users will soon be able to buy the “PuriCare Wearable Air Purifier”.

In the corona pandemic, consumer needs have changed significantly. The most important values ​​are now safety, entertainment and convenience, said Merlin Wulf, Marketing Director of LG Germany, on Thursday at a press conference at the IFA in Berlin.

This also makes a mask that is reminiscent of the face mask used by the “Storm Trooper” in the “Star Wars” films a product that the average user might be interested in.

It remains to be seen whether the device will be a hit. One thing is clear, however: the corona pandemic has given many manufacturers of entertainment electronics, household appliances and IT a special boom. “When people spend more time at home, the need for technology that makes life more productive, entertaining and more pleasant increases,” said Kai Hillebrandt, Chairman of the Supervisory Board of the host GFU. In the first half of the year, sales in Germany rose by 5.3 percent to 20.3 billion euros, according to the GFU.

IFA has a hygiene concept to protect visitors from infection.

For the fair, the marketing departments have therefore tailored their messages to the needs of those consumers who have the necessary budget to beautify their homes or upgrade their home cinema equipment. However, only in front of a small audience, the IFA may only take place in a small format. This is also a consequence of the pandemic.

In the meantime, it didn’t look like a boom. During the corona pandemic, according to the market researcher, users GfK go through different phases that can be seen in the demand for certain electronic products.

First panic when public life suddenly came to a standstill: During this time, companies and private users took care of urgent needs. From the perspective of the technology industry, this includes equipment for home office and homeschooling.

During the exit restrictions, webcams were particularly popular: the market researcher GfK recorded an increase of 300 percent. The demand for monitors (+120 percent), printers (+68 percent) and keyboards (+61 percent) was also high, as was notebooks (+62 percent). Many PC models are still sold out or are only available with a delivery period of several weeks.

Adjustment to the situation followed after a few weeks. “Because people are much more at home, they also place much more value on their immediate surroundings, because there is no longer any other entertainment such as theater, opera or sporting events,” says Stefan Streit, head of marketing at the Chinese electronics manufacturer TCL.

The manufacturers of televisions, tablets and game consoles, for example, whose devices provide an alternative entertainment program, benefit from this. Fridges and freezers are also in demand – people are currently cooking at home.

Many consumers have become more cautious when investing, according to Streit. “In comparison to other industries, however, we cannot complain.”

“The hour of marketing”

Whether a steam cleaning device for laundry, an inconspicuous extractor hood or a projector for high-resolution images in the home theater – the IFA’s program doesn’t sound great different than last year.

“Of course, the pandemic did not result in a conscious new development,” says Matthias Ginthum, Head of Marketing at BSH Hausgeräte, which belongs to Bosch. The cycles are too long for that. “But there are features that are particularly in demand in the current situation.”

For example, the largest household appliance manufacturer in Europe is currently observing great demand for washing machines with special cleaning programs, but also for kitchen machines for preparing smoothies or cakes.

Ginthum emphasizes that it is not just a matter of catching up to do with the exit restrictions in the spring: “We are seeing that there is a shift to certain product segments.”

BSH, which relies heavily on networking, adapts to this: in production and sales, but also in marketing. “Despite the restrictions, there is purchasing power that is paving the way. This is the hour for marketing and sales to make offers, ”says Ginthum.

However, it is difficult to say whether the corona boom will continue. The GFU expects further growth for the German market in the second half of the year, partly because consumers are still making some purchases.

In this particular situation, however, forecasts are difficult, as everyone in the industry emphasizes. It is difficult to predict how a second wave of infections would affect the economy and consumer confidence. Even an electronic mask doesn’t help.

More: How the IFA is dealing with the corona pandemic