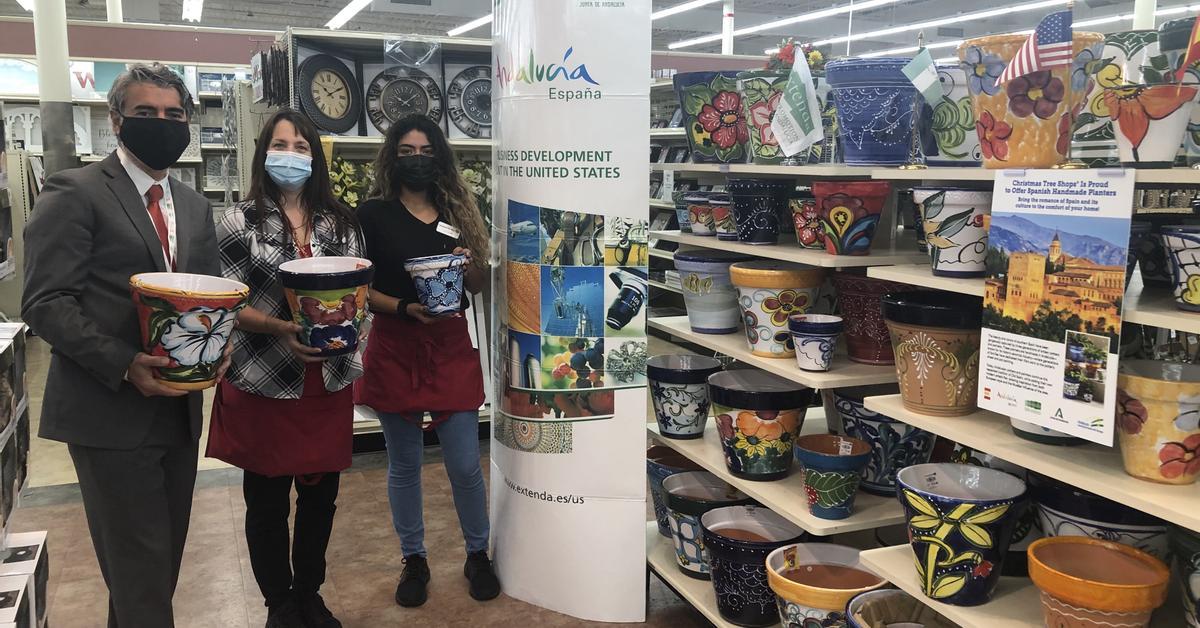 Extenda has organized a new promotional action in the United States aimed at promoting the purchase of decorative ceramics from Andalusia and present in this market, for which the public company of the Junta de Andalucía has launched a marketing campaign in ‘Christmas Tree Shop and That ‘, a leading retail chain of home and garden products in North America, with the aim of “spreading and promoting the Andalusia brand among consumers of this industry in the United States”, which will be in force, at the less, during the winter and spring of this year 2021.

‘Christmas Tree Shops and That’, which hosts the campaign and has 80 stores in 20 different states, mainly on the east coast of the United States, is valued “for its great variety and good prices in decorative items,” as reported by Extenda in a note.

Furthermore, the chain has relied on decorative ceramics of Andalusian origin for several seasons, having maintained a “collaborative attitude” with Extenda for the development of different promotions.

Thus, the retail chain has already begun to develop the marketing campaign and will remain in stores, at least during the winter and spring campaigns of 2021, to which new themed actions may be added at designated times, such as Valentine’s Day or the Mother’s Day.

In this way, Extenda emphasizes that it offers “fundamental support for the dissemination of Andalusian products and to reinforce its image in the US market”, which in the first eleven months of 2020 accumulates more than 70% of Andalusian exports from this industry, with a rise of 7.6% to 2.9 million euros.

In turn, this campaign takes advantage of the new international situation that arose after the health crisis caused by Covid-19, which has generated in the United States “a wave of public opinion for which products from the Union are much more appreciated. European, unlike products produced in Southeast Asia or China “, as explained from Extenda.

These promotional actions play “an essential role in the dissemination of the Andalusia brand in the decorative ceramics sector”, according to the public company of the Board, which affects that, in this way, the participation of the 80 stores in The promotion will make it possible to reach “a large number of US consumers and reinforce the presence of Andalusian brands, especially in those areas of the United States where Andalusian products have not developed their full potential.”

The CEO of Extenda, Arturo Bernal, has highlighted how “the quality, design, history and culture behind our products are being a fundamental axis so that international buyers who come and consume the Andalusia brand remain faithful, and for this we have as a clear reflection the market in the United States, where exports are on the rise. ”

This promotional campaign launched by Extenda-Andalucía Exportación e Inversión Extranjera will have the participation of four Andalusian companies belonging to the decorative ceramic industry. Three of them belong to the town of Bailén, in the province of Jaén –-Ceramic Santa Adela, Ceramics Pedro Manuel Casas and Macetas González-, and a fourth from La Rambla, in the province of Córdoba (Ceramics Alberto Yepes Padilla).

The organization of this action by Extenda, a public company dependent on the Ministry of the Presidency, Public Administration and Interior, will be co-financed with funds from the European Union through the PO Feder de Andalucía 2014-2020, endowed with a community contribution 80%, or “any other European program likely to co-finance this action”.

Decorative ceramic on the outside

Andalusia exported decorative ceramics in the first eleven months of 2020 for a value of 4.2 million euros, registering a “historical record” in its trade balance and its coverage rate, with 3.1 million euros and 398% respectively. , according to Extenda data.

In turn, the United States positioned itself as a country of reference in the destination of Andalusian exports in this sector, accumulating 2.9 million euros and 70% of the total, with a rise of 7.6% compared to the same period of the year. last year. It is followed, from far away, by Canada, with 7.2% of the total; and Italy, with 3.9%.

The Andalusian provinces that most exported decorative ceramics were Córdoba, accumulating almost half of the exports (49%), with two million euros; Jaén, with 1.5 million and 36%; and Malaga, with 437,000 euros and 10%.