Facial recognition, between fears and fascination 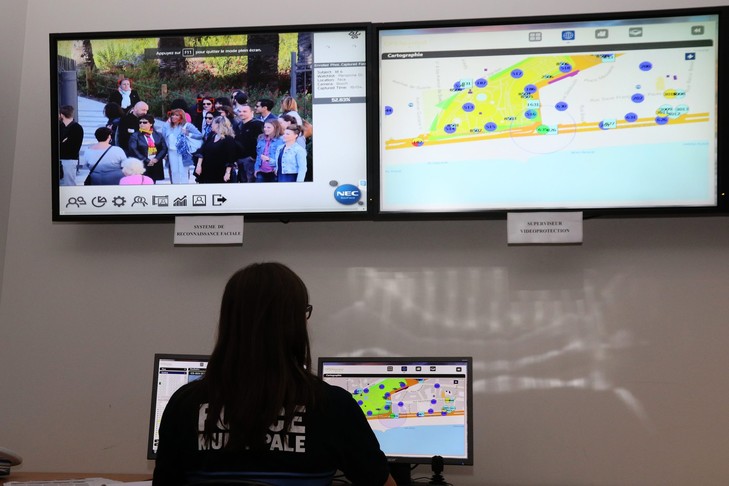 From the crowd, green laser beams are pointing towards the police. On the faces, masks. Above the heads, umbrellas and umbrellas. This is the essential kit to guard against facial recognition devices. This is not a science-fiction story but images, staggering, protests that have been taking place in Hong Kong for two months. In this city, as in the rest of China, the public authorities usually use facial recognition to identify protesters.

Face recognition lands at the airport

If France is very far from making such a use of these technologies, experiments are multiplying, encouraged by companies who want to promote their techniques and which meet the demand of local communities. One of the latest? The experimentation during the Carnival of Nice, in February, a facial recognition device to monitor the crowd. A first that made a lot of noise. The Mayor of Nice, Christian Estrosi, is one of the strongest advocates of this technology. "We can know where people are permanently stuck. I will not let go and Nice will be the first city in France to have facial recognition ", he said in January at a public meeting.

This discourse finds a certain echo even in the ranks of the government. "It's thanks to the video that we were able to find the alleged perpetrator and challenge him, in June the Interior Minister, Christophe Castaner, visiting Lyon after a parcel bomb attack that had 14 wounded. But it is a work that has been done frame by frame with police officers behind each screen: facial recognition can help to go faster. "

The use of this technology remains certainly prohibited on the public road because it requires, except exception, the express authorization of the people, but the experiments multiplied. "We've been hearing about it for five years, but things really accelerated about two years ago," notes Thomas Dautieu, director of compliance at the National Commission for Informatics and Liberties (Cnil).

Since May 2018 in particular, date of entry into force of the European regulation on the protection of the data, the companies and the local authorities no longer have the obligation to obtain the authorization of the CNIL. "But many continue to consult us before testing a device, He continues. The use of facial recognition during the Nice Carnival was presented as an experiment to test the effectiveness of certain algorithms. But we can see that in the very short term, there is a clear desire to promote this type of technology, especially for the fight against terrorism. "

For their part, manufacturers vie with imagination to propose solutions to public authorities. This is the case for Cisco and its program for "Smart Cities 3.0". "Video cameras with features like facial recognition (…) can help municipal operators and police to detect and respond to incidents more quickly, " boasts his brochure.

"We must be careful not to go too fast in the implementation of such technologies," says Laurence Devillers, specialist in artificial intelligence. This researcher at CNRS advocates for the creation of a multidisciplinary institute responsible for their evaluation. "It takes teams of computer scientists, roboticists, philosophers, anthropologists and psychologists to understand how these systems are formed but also their side effects, especially on the social level. "

In mid-July, a note from the Parliamentary Office for the Evaluation of Scientific and Technological Choices also put forward some possibilities of supervision. Among them: the guarantee of a "Human validation for the most sensitive uses", particularly in the context of judicial proceedings, and the establishment of"Studies on the acceptability of these technologies by different categories of the population". What nourish a debate called for by the CNIL. "We should not think about these topics in a fragmented way, project by project. We must organize a real global reflection in Parliament ", Thomas Dautieu insists.

The debate seems all the more necessary as the government is working on the much more massive use of facial recognition, via the implementation of an application named Alicem. From 2021, we can download on his phone this "app" developed by the Ministry of the Interior, which will allow everyone to prove his identity on the Internet in a secure way. This will allow for example to take steps with taxes, health insurance or a pension fund.

"What will happen if there is a data leak? "

But before that, the user must pass through a step of "dynamic facial recognition" from a video taken in real time. The user will have to perform a series of movements imposed by the application, such as blinking eyes, moving the head and face … Video that will then be sent to the National Agency for secure titles.

An obligation criticized by the CNIL and La Quadrature du Net: in July, this association for the defense of civil liberties filed before the Council of State an appeal against this device.

"TheApplication requires the collection of very sensitive data and can not be more personal, Benoît Piédallu, member of La Quadrature du Net. Especially since the videos sent by users allow recognition much more accurate than a simple photo.

California takes the lead in resistance against facial recognition

"What will happen if there is a data leak? And if, in a few years, a government less mindful of the right of citizens has a base grouping the facial identity of the entire population and wants to use it to identify protesters or opponents, what will prevent it from do it ? It will be enough for it to adopt a decree to access this base. " This activist warns against the trivialization of such technologies.

In September, for example, two high schools in the south of France, Eucalyptus high schools in Nice and Ampère in Marseille, will install gantries to control the arrival of their students. The initiative is closely monitored by the SNPDEN, the main union of executive staff. "Securing the entrance is a concern for all institutions, concedes Isabelle Lagadec, one of its regional leaders. Will this solution solve everything? We will see. We will look at the results of this experiment with great interest, bearing in mind, of course, the technical, ethical and legal issues. "

Uses by the police

Police and gendarmes are allowed to use facial recognition to compare images obtained during an investigation with the content of the "TAJ", a file containing the records of persons involved in certain preliminary investigations. According to the CNIL, this TAJ file contains records of more than 18.9 million people involved in past cases.

Are you stuck for a criminal record?

The police also use facial recognition for accelerate the crossing of borders. This is particularly the case in Paris airports, where 90 "sas Parafe" ("Automated Rapid Transit at the External Borders") with facial recognition have been installed. Passengers no longer identify themselves by putting their fingers on a screen, as was the case before, but present their faces to a screen that checks whether the recorded image matches the passport photo.

Devices similar to those used at the Gare du Nord, for Eurostar passengers.

"The Cross" is a partner of the consultation "How can the media improve society?" with Make.org, Reporters of Hope and several other media. You can participate in this consultation by submitting your ideas and voting on the ideas of the other participants below. We will report the results at the end of September 2019.

The jury of the Pop-Eye Awards, awards that, since 2005, celebrate the best of music and independent creation every...
Read more

The decisive voice came from the AfD - and it didomed him: Günter Schulz, the newly elected mayor of...
Read more

The UK government has introduced a system for tracking coronavirus infections in England....
Read more

Nissan teases several new features, including the Qashqai and the next Z coupe

Nissan is relaunching itself, with the presentation of a new strategic plan, which runs until its fiscal year 2023....
Read more

The jury of the Pop-Eye Awards, awards that, since...
Read more

The decisive voice came from the AfD - and...
Read more

The decisive voice came from the AfD - and...
Read more
News

What COVID-19 teaches us how to reform Medicare

Non-payments in rent are tripled by coronavirus

The economic crisis unleashed by the coronavirus has triggered...
Read more

The jury of the Pop-Eye Awards, awards that, since 2005, celebrate the best of...
Read more

The decisive voice came from the AfD - and it didomed him: Günter Schulz,...
Read more

The UK government has introduced a system for...
Read more