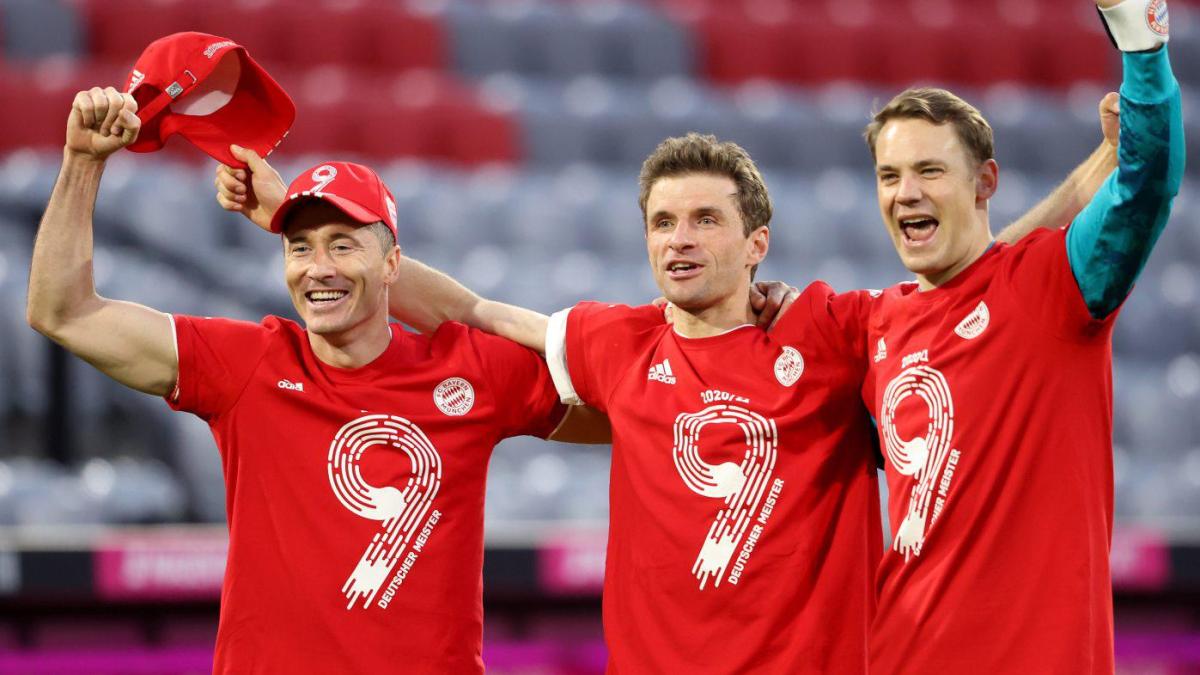 After this Bundesliga weekend, it is proper to leave the first word to a Bavarian. Robert Lembke, the old master of cheerful professional advice (“What am I?”), Once revealed: “There are television programs that make you envy your feet asleep.”

In football too. Pure boredom, many complain and yawn again now, because for the ninth time in a row, FC Bayern became German champions. His opponents are noticeably like Jürgen Blin, who was knocked out against Muhammad Ali in 1971 and said: “I had no chance. Ali should have blown himself away. “

Bavaria’s dominance makes many so sick that Federal Health Minister Jens Spahn is allegedly already considering adding a warning to digital tickets next season, as with the cigarette packets (“Smoking can be fatal”): “Boredom can be fatal . “

However, there is still a second opinion among lateral thinkers, which is often neglected in the debate: Are Bayern possibly the victim of a huge mistake – and in truth the biggest thrill in the league?

Admittedly, at first glance the now 31-time permanent champions from Säbener Straße look like the coffin nails of tension. The news that FC Bayern are champions is only half as exciting as the news that it will be light again tomorrow morning.

And yes, nowadays such a Saturday, which was once the biggest day in the Bundesliga, goes more and more like this latest Saturday: 6-0, three boxes from Robert Lewandowski, a total of 39 goals from him alone. Gerd Müller’s record of 40 goals wobbles, you listen for a moment, but what else? Yes, and here it comes: does a season only have Saturdays? Don’t Bayern make every other day a thrilling experience?

FC Bayern is rightly called FC Hollywood or even FC megalomania by friends and foes alike. Before it gets boring, a Bavarian star swiftly gobbles up a luxury steak breaded with gold leaf in a dining temple in Dubai, for around 1200 euros. Or a Bayern boss is locked up with a high level of public participation or holds a press conference in which he insists on Section 1 of the Basic Law (the dignity of the Bayern player is inviolable).

In an emergency, Paul Breitner comes along and attacks Uli Hoeneß, with whom he used to be as close as Garmisch and Partenkirchen. And the Uli then disregards the Paule, as one has not seen it since Al Pacino believed himself to be betrayed by his brother as Don Corleone in “The Godfather” and had him fusilized on a boat trip in Lake Tahoe.

All of this is exciting. In any case, much more exciting than, for example, Gladbach’s football, which so many admire again and again, although even their coach Marco Rose said on Saturday: “If you want to pee with the grown-ups, you have to act like that. Towards the end, our performance was like a power failure. “

That never happens to Bayern. Nevertheless, there are people who hope that these success-hungry people, and ideally also the Dortmund and Leipzig residents with them, will someday disappear in a Super League for never to be seen again. “Finally,” the fans in Frankfurt dream, “our Eintracht can become German champions again, like in 1959.” However, a title fight like this between Frankfurt and Leverkusen would not tear anyone apart from Frankfurt and Leverkusen. Even the current DFB cockfight between Keller and Koch is more captivating, especially since there is still a chance that it will not end without bloodshed.

No, Bayern are not the bores. Uli Hoeneß alone is more electrifying than all the other 17 clubs put together. I have known since the sports director of a major newspaper once told me when it came to Internet clicks: “You are right at the front if the name Hoeneß appears in your column.” Watzke would also be a click-maker, but only within the city limits of Dortmund.

Incidentally, Dortmund were the last to become champions instead of Bayern, almost ten years ago. But their triumph went completely under the shadow of a new Bayern club history, the largest football book in the world. It cost about 2999 euros, weighed 30 kilos, was 70 centimeters high and 50 wide and 552 pages thick, so heavier than Uli Hoeneß and taller and wider than the then Bayern captain Philipp Lahm. The cover was made of birch wood, and possibly the text was made of heavy brass letters and the book was also foolproof locked with a huge padlock, so that the reader had to hoist it onto a heavy-duty truck with a crane before it was removed. In any case, it was more exciting than BVB’s championship title.

Bayern know what’s exciting. When everyone recently thought that the air was out of this season, Hansi Flick and Hasan Salihamidzic unceremoniously wedged themselves together in such a way that the upcoming cup final between Dortmund and Leipzig is comparatively only worth a tired yawn. And on Saturday, the outburst of anger from Gladbach’s sports director Max Eberl in the direction of Flick (“Don’t show me a bird, Hansi!”) Caused a louder response than anything else that Gladbachers had to offer.

Nothing works without Bayern. Saturdays are becoming increasingly dull, but apart from that, we can all comfort ourselves with Heinrich Heine during the rest of the season: “When God is bored in heaven, he opens the window and looks at the boulevards of Paris.”

Only the FC Bayern boulevard is more exciting.