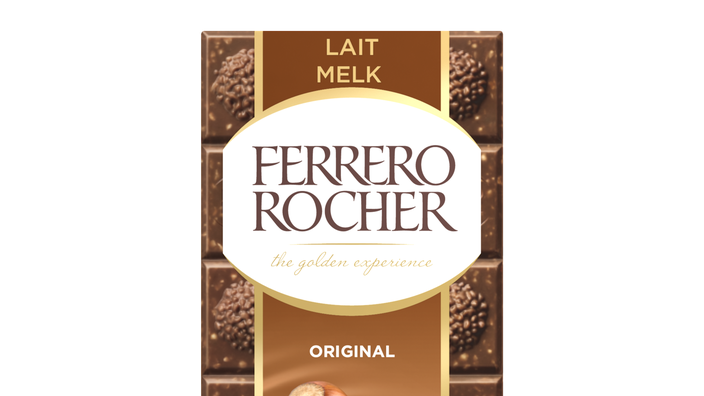 The brand, which accounts for 10% of the sales of the Italian giant Ferrero in France, is launching three filled chocolate bars in November in a healthy French market.

Three hundred trials, and three years of research and development. This is the time it took for the teams of the Italian group Ferrero to develop something to satisfy its most greedy customers. And especially lovers of its famous Rocks, born in 1982 in the Italian stronghold of Ferrero, in Alba.

From this summer until November, the group will be launching throughout Europe a “chocolate bar” version of its delicacies soon to be in their forties. Already available in England, they will arrive in French, Belgian, German and Italian shelves on November 1st.

Available in three versions (55% dark, milk and white) all assorted with hazelnuts, these everyday sweets will be 90 grams in size, just as big as an iPhone. They intend to make a place for themselves on a market for tablets in supermarkets of 1.3 billion euros in France. A sector in shape, boosted by the desire of the French to have fun in times of crisis, and which grew by 3.4% last year.

“After the launch of Ferrero ice cream this summer, the idea is also to offer a third season for Ferrero Rocher,” explains Camille Chipot, in charge of marketing the group’s premium chocolates in France. In fact, the one that runs from Christmas to Easter accounts for 90% of sales of Ferrero rocks in France.

In addition, these are only available on the shelves nine months out of twelve in France for, dixit Ferrero, “Preserve taste qualities” adapting badly to summer heat. This does not prevent the brand from seeing its turnover increase by an average of 4% per year since its creation. To continue this growth, the group will launch “Origins” for the end-of-year celebrations, assortment boxes of its dark chocolate rocks. A first for the brand.

In the strategy of extending its brands (Nutella, Kinder, Rafaello, Ferrero Rocher, etc.) to new categories, the family group, which exceeds 12 billion euros in turnover worldwide, does not ends up innovating. In addition to tablets and ice creams under its Ferrero brand, which with 140 million euros in turnover represents 10% of its activity in France, it has launched a major offensive in biscuits since 2016. In particular with the big successes of Nutella B-Ready and Nutella Biscuits in 2016 and 2019, then Kinder Cards in March 2020 and Kinder CereAle for breakfast at the start of the year. Another initiative is the takeover five years ago of the Belgian biscuit maker Delacre, whose expertise he has just extended to include cookies.

Enough to make him nibble little by little more than 10% of the enormous market of cookies and cakes in France, which weighs 3.7 billion euros in turnover according to the Union of biscuits, cakes and breadmaking of France. While this very battled sector suffered in 2020 from the revival of home-made with confinements, Ferrero is therefore playing, with this new innovation, the pure chocolate card. A card that has been quite successful for him for over 75 years.