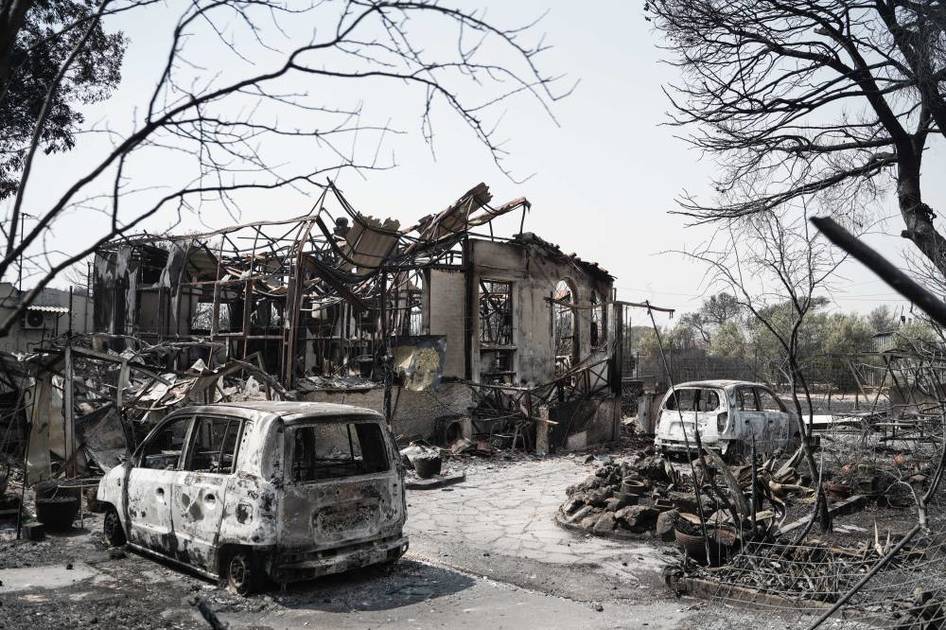 On Wednesday afternoon, fires surrounded a monastery and more than a dozen villages on the Greek island of Evia, 200 kilometers from Athens, in the fiercest forty fires sweeping Greece amid a heat wave.

The fire, whose huge fires rose from the forest, seemed out of control, according to the firefighters at the site, due to the ruggedness of the area and the poor visibility. Twelve threatened villages were evacuated, but three monks refused to leave the monastery of St. David, located on a mountaintop near Rovies in the north of the island, police and firefighting teams said.

One of the monks said in a telephone interview with the Greek News Agency: “The flames of fire are thirty to forty meters high and surround the monastery. We are suffocating because of the thick smoke.” “We will evacuate them by force” if their lives are in danger, a police officer told AFP. Three firefighters were slightly injured while battling the blaze, authorities said.

One hundred firefighters backed by two helicopters and four water-propelled grenades were sent to fight the fire, according to the civil defense. But the region’s deputy governor, Dimitris Vordanos, said: “We are unable to intervene, neither by air nor by land.” “There are two main fronts that are out of control and several smaller ones,” he told Kathimerini daily.

The mayors of two towns denounced the lack of resources, and Limni’s mayor, Yorgos Tsaborniotis, said: “We ask the authorities to reinforce the air and ground forces so that human lives are not in danger.” “No aerial means have been deployed to put out the fires,” said Mantudio Mayor Argyris Liaskos, deputy mayor of Mantudio, adding on Sky TV: “At least 150 houses were burnt.”

The number of fires burning in Greece on Wednesday reached about forty, amid an exceptional heat wave and heat exceeding forty degrees, according to Assistant Minister of Civil Defense Nikos Hardalias.

Firefighting teams were in the process of putting out a fire that broke out on Tuesday at the gates of Athens, after it destroyed about 1,250 hectares of bush at the bottom of Mount Barnes, 30 kilometers from the Greek capital, according to Hardalias.

In a related context, tourists and residents on the Greek island of Evia fled to the coast in preparation for their evacuation by boat Wednesday, with forest fires spreading rapidly in the pine forests.

The fire, fueled by a change in wind direction, has forced authorities on the island near Athens to evacuate several villages since late Tuesday. The authorities asked residents and tourists in the seaside village of Rovis to evacuate to near the sea on Wednesday.