The remaining games of Group A of the Qatar World Preliminary Asian Top 40 will be held in Suzhou from May 30th to June 15th. On the evening of the 30th, the Chinese team will usher in the Guam team, the first opponent of this stage of the event. After two weeks of training, the Chinese team’s generals have made all preparations for the game on the technical and psychological levels, and winning should be a matter of course. However, this game is the first official game led by Li Tie as the national football coach. Based on the current reality and development of Chinese football, the significance of this game may be far better than “competition for the right to qualify.” Li Tie and his The pressure the disciples are under at this moment can be imagined. It is also to encourage the upcoming national football team, the Chinese Football Association chairman Chen Xuyuan sent a text message to Li Tie via WeChat on May 29, requesting the national football team to work hard under the attention of all walks of life across the country, and refuse to be slack due to underestimation of the enemy. Li Tie also made a solemn promise that the whole team will value the opponent, and he himself will lead the team to show good looks in the match on the 30th night.

At 4:30 pm on the 29th, Li Tie, who had just participated in the pre-match press conference of the Zhongguan and Guan competitions, appeared at the exclusive training site of the National Football Team in the Epidemic Prevention Red Zone of the Suzhou Division of the Top 40 competition, preparing to lead the team for the final pre-match practice. Until this time, the team has not publicly confirmed the list of 23 players participating in the 30th game. Li Tie seems to have to consider the candidates through the “last practice”.

In the first round of the top 40 match between the two teams in October 2019, the Chinese team won the Guam team 7-0. In the eyes of the outside world, even if the Guam team is not the weakest team in Group A, they cannot compete with the Chinese team in terms of strength. When the North Korean team retired and its five top 40 matches became a reality, the game against Guam was more like an important training for the national football team in the two key battles with the Philippines and Syria.

But in addition to the competition itself, the competition has a deeper meaning for the Chinese team. This is because since the national football training team went to South Korea to participate in the East Asian Cup at the end of 2019, the Chinese team has not participated in official international competitions for one and a half years. To be precise, the match on the 30th was the first official match that Li Tie led his team to participate in after he took charge. Whether Li Tie can become Lippi’s competent successor after leaving office, and whether the Chinese team can make it into the top 12 matches, so as to “rescue the market” for Chinese football in trouble, the top 40 record is undoubtedly an important reference. From this perspective, Li Tie, the National Football Association and even the industry managers of the Chinese Football Association have all carried tremendous pressure. “The Chinese team must not only win, but also win beautifully, and boost the morale of Chinese football.” Similar voices have become a common consensus among domestic football workers.

On the evening of May 28th, two days before the Zhongguanguan match, the “Dakin Hebiti National Football Reporters United” and the top 40 were in the subfield of the Suzhou Olympic Sports Center, which was composed of media reporters who went to Suzhou to report on the national football match. The Suzhou Division Organizing Committee team used their spare time to conduct a friendly football match. As the main person in charge of the impact and preparation team for the top 40 of the National Football Association, the chairman of the Chinese Football Association, Chen Xuyuan, also participated in the game, and represented both sides for 3 quarters, and even scored a winning penalty for the media team. . 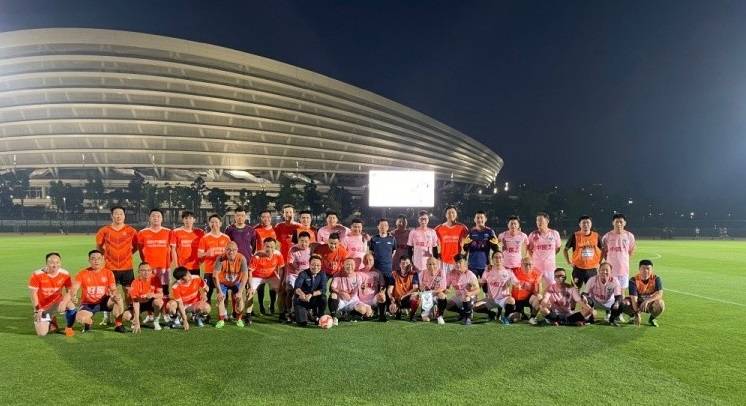 It is understood that Chen Xuyuan will keep in touch with Li Tie during the previous preparations for the national football team, or communicate online or meet offline to solve problems for the team. On the 29th, the day before the Zhongguan and Guan competitions. Chen Xuyuan sent an inspirational text message to Li Tie via WeChat.The general meaning of Chen Xuyuan’s text message is that the match on the 30th was the first official international match of the National Football Team in the past two years, and the match also attracted attention from all walks of life across the country. Therefore, the whole team is required to show a good mental outlook and work hard. Chen Xuyuan also kindly reminded that the national football team should not underestimate the enemy or slack off the opponent because the opponent’s strength is relatively weak.

A short and profound message with less than a hundred words expresses the eager expectation of the head of the Chinese Football Association for the national football team to compete for glory, and actually expresses the trust in the team’s victory. It is understood that Li Tie also responded to Chen Xuyuan as soon as possible, asking him to rest assured, and solemnly promised that the whole team will value every opponent, including the Guam team, and show a good spirit.