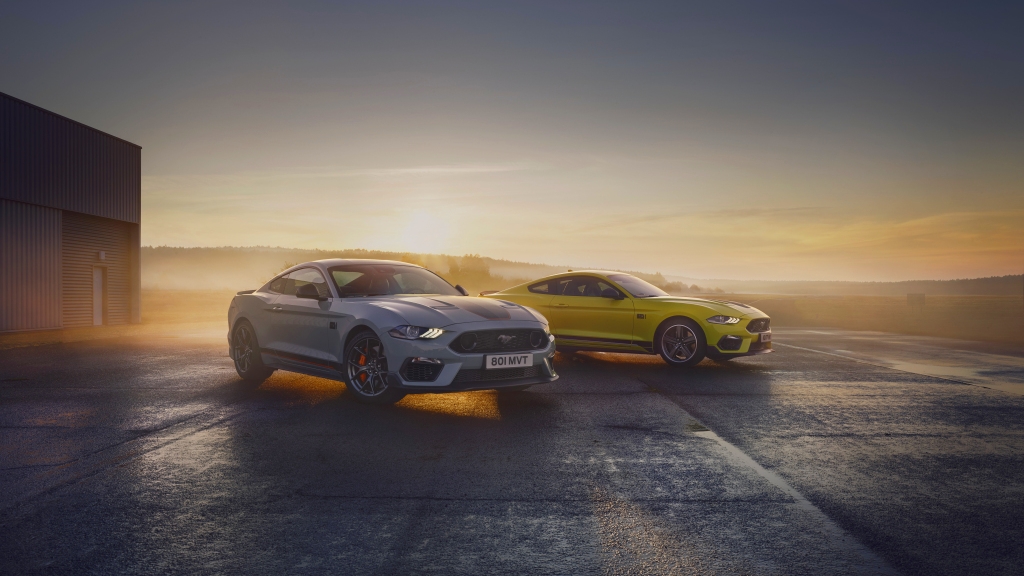 Ford announces the marketing of the new Mustang Mach 1, a “high performance” version of the American pony car.
Developed to perform well on the track, it is announced by the manufacturer as the most powerful production Mustang ever offered on the Old Continent, but the Mach 1 remains a good distance from the Shelby Mustang GT.350 and GT.500.

Presentation of the new Mach 1

The new version of the Dearborn manufacturer’s coupe revives the Mach 1 name that had not been used by the brand for 17 years and the style is heir to that of the first Mustang Mach 1 appeared in 1969.
To play it “revival”, the Mach 1 MY2021 is adorned with bands running on the top and sides of the car.
The grille design is modified to evoke the round lights of the old versions.
The Mustang Mach 1 benefits from an aerodynamic kit that improves downforce by 22%, according to Ford. New 19-inch specific aluminum rims are fitted to this Mach version and some eight color combinations dedicated to this model are available in the catalog for Europe.

The Ford Mustang Mach 1 in detail

A glance at the interior

Once on board, we discover a cabin where black leather upholstery, contrasting light gray stitching and a transverse color stripe on the back of the front seats (except with the Recaro seats option) are mixed. A few metallic inserts and mats complete the equipment of the Mach 1.
For the rest, there is a classic Ford Mustang interior embellished only by a numbered plate attached to the dashboard.

The technical evolutions of the Mach 1

This Ford Mustang Mach 1 benefits from a serious evolution of its V8 engine.
This 5.0 L V8 engine announces 460 hp at 7,500 rpm and a torque of 529 Nm at 4,600 rpm thanks to a new calibration of the block and the installation of a cooling system optimized for use on the track.
Note, however, that the adaptation of the Mach 1 coupe to very strict European standards causes the 5.0 L engine to lose 27 hp and 40 Nm (487 hp and 569 Nm for the US version). There was a time when it was the other way around.
With its specifications, the Mustang Mach 1 takes up the specifications of the Bullitt version which is withdrawing in the fall of 2020. The only difference lies in a power regime located 250 rpm higher.
Developed at Ford Performance, this new version is offered with two types of transmission, namely a BVM6 TREMEC and a more classic 10-speed BVA.
The 6-speed manual transmission with automatic downshift speed synchronization system is part of it as well as a limited slip differential which helps a lot for more efficiency.
The coupe benefits from a revised suspension intended to improve performance on the road but also on the track.
Thus the adaptive MagneRide shocks have been recalibrated as have the suspensions which have seen their settings modified and the anti-roll bars stiffened and reinforced.
Still in terms of ground linkage settings, Ford engineers have reworked the electric power steering for more precision and a European “touch of the road”.

Finally, to take full advantage of the big sound of the V8, Ford has equipped the Mach 1 with an active exhaust, which adapts to the different driving modes, with more particularly a Circuit mode which allows the American 5.0 L engine to breathe well and to indulge in beautiful vocalizations when fully charged.

The new Mach 1 will be produced as part of a limited series but Ford does not give any indication of the number of copies of the model planned for production.
The price of this Mustang (at the end of its life in 2021) is not yet known.
Finally know that Ford France did not provide any information that could confirm or not the arrival of the Mustang Mach 1 MY 2021.
Indeed, the American coupe is awaited here by the famous new big ecological penalty of 40,000 € which should put a big blow to the portfolio of buyers and ultimately dissuade them from purchasing such a model.
The case is to be followed in the coming weeks, on the one hand to know the pricing of the model and on the other hand to know if the car will come to France.