Compared with the previous shocks, the A-share market seems to be a bit more bullish recently.The Shanghai Composite IndexAfter a lapse of 3 months, it stabilized again at 3,600 points, and the turnover of the two cities exceeded one trillion, which was regarded as a bull market indicator.BrokerageStocks have risen, and core assets have strengthened.Northward capitalSharply againNet inflow, Become the focus of market attention.

Compared to early May, we went north last weekCash flowThe speed of investment has accelerated significantly. What is the catalyst that led to the huge net purchase of funds from the north, and what will happen in the future?

Many people believe that this is due to the appreciation of the renminbi. Throughout May, the offshore RMB exchange rate against the U.S. dollar appreciated by 1147 basis points, breaking through the 6.4 integer mark in one fell swoop. The latest quotation reached 6.3593, a record high in the past three years. The U.S. dollar index has been falling since April this year, from a relative high of 93 to the latest 90.07 points, and it also fell below 90 points several times in late May. Behind the appreciation of the renminbi is the steady improvement of the Chinese economy.

According to the economic data released by the National Bureau of Statistics on April 16, China’s first quarter of 2021gross domestic productReached 24.93 trillion yuan, an increase of 18.3% year-on-year.In contrast, the first quarter of the United StatesGDPA year-on-year increase of 0.4%, the growth rate remained unchanged after the second revision.Most indicators of the US economy are lower than market expectations. In May, the Richmond Fed Manufacturing Index recorded 18, which is expected to be 19; the total number of new home sales in April was 863,000, with an expected 970,000; the May Consultative ConferenceConsumer Confidence IndexRecorded 117.2, expected 119.4.

China’s GDP growth rate in the first quarter hit a record, and the US GDP growth rate also picked up, but this was mainly due to the low GDP base in the first quarter of last year. Judging from historical data, China’s economy has been steadily improving. This is not only the internal basis for the appreciation of the renminbi, but also the reason why international capital pays attention to A shares, and the value of renminbi asset allocation is prominent.

It can be seen from historical data that when the RMB exchange rate breaks upward, the willingness to flow northward funds into A shares has increased significantly(In order to maintain comparability, data from May 2018 to the present), according to the statistics of Securities Times·Databao, when the offshore RMB exchange rate against the U.S. dollar exceeded 6.6, the average daily net purchase of Beijing Capital exceeded 2 billion yuan and fell below 6.8. The average daily net purchase of funds from Beijing is only about 1.1 billion yuan. 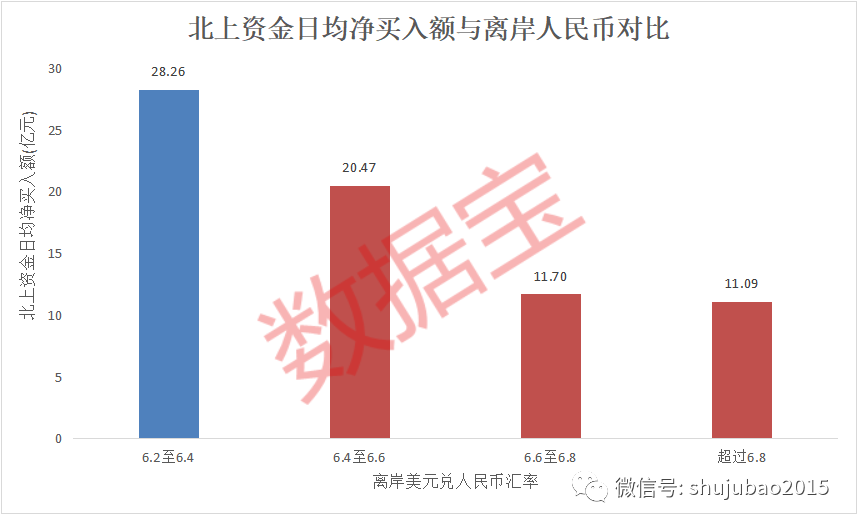 Beijing Capital’s transactions were more active in May

History is always playing out in different ways, and May has always been a relatively active month for capital transactions in Beijing. According to statistics from Databank, since the opening of the interconnection mechanism, except for May 2019, most of the funds going northward in May of the past years have been net purchases.In terms of the amount of purchases, compared to previous years, May this year was the month with the highest net purchases of funds from Beijing, and the cumulative net purchases have exceeded 50 billion yuan.

From the perspective of transaction activity (the trading volume of Beijing Capital Funds on the same day/the total trading volume of the Shanghai and Shenzhen stock markets on the same day, the time is taken from the opening of the interconnection mechanism), the daily average activity of Beijing Capital Funds in May reached 5.4%, which was only slightly lower than February And the average level in October.

It is worth mentioning that May is the “vacuum period” after the release of the annual report and the quarterly report. Industrial capital is often based on the history of listed companies.PerformanceThe situation predicts the future development. The stock market enters a state of “short, flat and fast”, and the rotation of the sector will also accelerate. Therefore, the A-share market capital transactions in May were relatively active. Data treasure statistics show that the average turnover rate of the market in May was significantly higher than that in other months.

A strong return of core assets

The appreciation of the renminbi, especially the regulators encouraging long-term value investment, the scarcity of core assets is reflected in the market, asset price revaluation has made foreign investors more sought after value stocks, and these underlying markets have performed very well.The constituent stocks of Beijing Capital Capital rose by an average of 3.27% last week, and the average gains of the remaining stocks were less than 3%.SSE 50The average increase of constituent stocks is more than 4%.

Hundreds of billions of tickets were bought by foreign investors

Judging from the month-on-month change in the shareholding ratio, the top stocks with the largest shareholding ratio are mostly industry leaders in the segment, such asOriental wealth、CICC、Bull GroupWait.All 8 giants with a market value of over one trillion have increased their holdings,Construction Bank、Ping An of China、China Merchants BankThe proportion of increase in holdings ranks among the top; only 19 shares with a market value of over 500 billionHikvisionandBYDWas slightly reduced.Before last week, Beijing Capital’s attitude towards these super leaders was still vague. Judging from the stock holdings on May 21 and the end of April, many stocks were still under reduced holdings, likePing An of China、Construction Bank、Haitian Flavor Industry、Hengrui MedicineWait.

Judging from the details of Beijing Capital’s shareholding institutions, the Hongkong and ShanghaibankLimited, Standard Charteredbank(Hong Kong) Limited andJPMorganbank4 other institutions hold more than tens of billions of shares,Kweichow MoutaiBoth rank first in the value of the stock market.

Judging from the quarter-on-quarter change in the shareholding of the Hongkong and Shanghai Banking Corporation Limited, the largest holding institution of Beijing Capital, the large financial sector has gained more shares, such asOriental wealth、Agricultural Bank of ChinaEtc.; technology stocks have been reduced in large areas, such as Shengyi Technology,GoertekWait.

The industry shareholding rotation best reflects the phased investment style of Northward Capital. From previous studies, foreign capital has a strong preference for big finance and big consumption.Judging from the industry’s net purchases last week,food and drink, The financial sector ranks among the top in terms of net purchases after a lapse of many weeks, And before that, except for the banking sector, these industries had net sales to varying degrees. Last week, cyclical industries including steel, mining, and automobiles were net-sold, but the steel and mining industries were all net-buying until mid-May.

Extend the timeline to find out,8 industries including household appliances, computers, and telecommunications have received consecutive net purchases in the past 3 weeks;Textile and ApparelandAutomobile industryIn the past 3 weeks, it has been sold continuously. 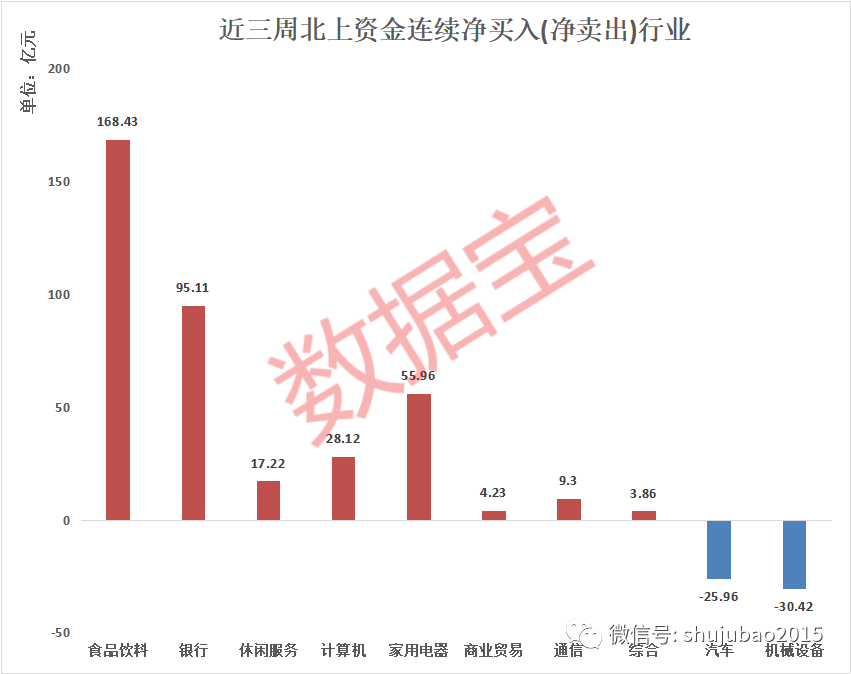 After heavy purchases, the market has a higher probability of rising

Foreign buying, buying and buying has led to market optimism. For A-share investors, should they follow to increase their positions or wait and see? Will the northward capital increase investment in A-shares in the future? How will the market go?

Recently, a number of brokerages have collectively spoken out,Haitong SecuritiesIt is believed that the current pessimistic expectations are passing. With reference to the volatility of historical stock indexes, there is still room for the stock market to expand upward this year, and the probability of the index reaching a new high is relatively high.Guotai JunanAlso means,Shanghai IndexIt has been sideways at 3300-3500 for nearly three months. The volatility will continue but will not last long, and the market outlook will oscillate.

From a data perspective, the Shanghai Stock Exchange Index stopped for four consecutive years on May 28, and there was a small net outflow of funds from the north. The interconnection mechanism has been in operation for 6 and a half years. Foreign capital has always acted by chance, and the number of consecutive heavy purchases is not many. In history, only 25 trading weeks of Beijing Capital’s net purchases exceeded 20 billion, accounting for Less than 10%. One week after these 25 trading weeks, there is more than 90% probability that Beijing Capital will continue to buy net, and there is a 50% chance that it will still buy a large amount (net purchases exceed 10 billion).

Whether the Beijing capital will continue to buy in the future is actually closely related to the market environment at that time.The new crown epidemic continues, and many overseas countries are still mired in quagmire.MidlandMany countries led by the Reserve Bank have continued to release water since 2020, and the appreciation of the renminbi has allowed many overseas funds to see the value of A-share investment. However, the rise and fall of the renminbi are the norm, and there is no only rising or falling or only falling but not rising. At present, the US dollar index is stabilizing, and it is not a wise move to blindly follow the capital from the north, and there are still certain risks after huge purchases. 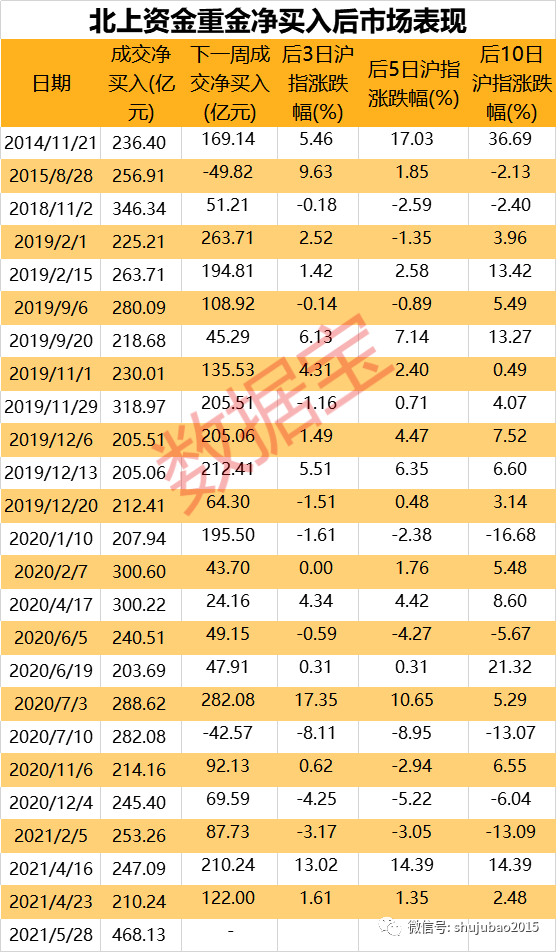 The famous investment guru Howard Marks once said: “No asset class or investment has inherently high returns. It is only attractive when the price is right.” The strong scavenging efforts of the northward funds will undoubtedly boost the confidence of the market to do more. What other companies are worth investing in in the future. For A-shares, those high-quality assets that have not yet started and whose performance has grown steadily may have higher attractiveness.

Data treasure is based on conditions: the market value exceeds 10 billion, and the stock price has fallen by more than 20% during the year. In the past 3 yearsNet profitIn line with the growth rate of more than 10% (as of 2020), the agency unanimously predicts that the net profit growth rate in 2021 and 2022 will exceed 10%, and last week, the Beijing capital increased its holdings by more than 0.05%, and a total of 27 stocks were counted.Including those with a market value of over 200 billionCICC、Luxshare PrecisionandHengrui Medicine, The largest number of electronic, medical and biological and non-bank financial stocks.

For the above 27 shares, the stock prices of the above-mentionedHuahai Pharmaceutical、Zhongtai Securities、Zhejiang Dingli, 3 shares fell more than 35% during the year.In the past three years, the net profit compound growth rate has been relatively fast.Zhongji Innolux、Luxshare Precision、FlatAnd so on, are more than 50%. According to the unanimous forecast of net profit growth by institutions,Tongfu Microelectronics、Joyson ElectronicsThe net profit of 2 shares this year may increase significantly.Compared with the previous week, the proportion of capital increase in Beijing’s month-on-month holdings is among the highestZhongtai Securities、FlatandTongfu Microelectronics。