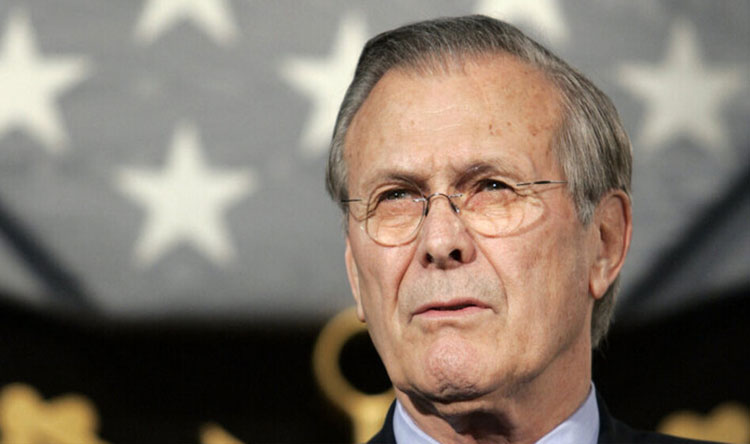 The former US Defense Secretary Donald Rumsfeld, one of the key decision-makers in the administration of President George W. Bush regarding the war on Iraq in 2003, died in the United States. The Rumsfeld family said in a statement today, Wednesday, that he died in Taos, New Mexico, at the age of 88.

Rumsfeld was considered one of the most influential American defense ministers since the era of Secretary Robert McNamara, who held this position during the war in Vietnam, and he is also the Secretary of Defense who had the second longest term in this position in American history, and he was among the advocates of taking a strong position. in international matters.

Born in 1932 in Chicago, Rumsfeld joined the US Navy in 1954, where he served in the Navy’s aviation until 1957. Rumsfeld began his political career in the 1960s, when he was elected to the US House of Representatives from the Republican Party. In 1970-71, Rumsfeld was an advisor to President Richard Nixon, and then the US delegate to NATO in 1973-74.

Rumsfeld assumed the position of Secretary of Defense in 1975-1977 for the first time in the administration of President Gerald Ford, and during that period he supervised the transition from mandatory to voluntary service in the US Army. After many years of working in the private sector, Rumsfeld returned to the position of Secretary of Defense in 2001 after George W. Bush’s assumption of the US presidency.

Donald Rumsfeld became among the most prominent figures who were behind the launch of the military operation in Afghanistan in 2001 and the “war on terror” following the al-Qaeda attack on New York and Washington on September 11, as well as the war on Iraq in 2003, which resulted in the overthrow of Saddam Hussein’s regime. Which resulted in many years of lawlessness in Iraq.