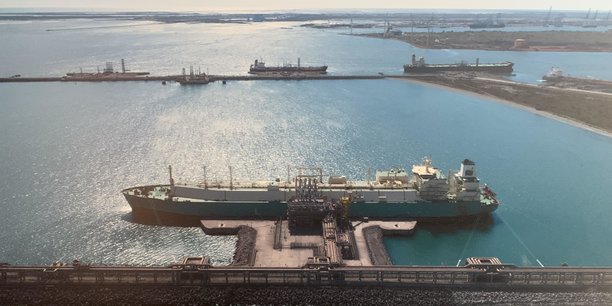 “We are at the maximum”warns Nelly Nicoli, Managing Director of Elengy, the Engie subsidiary specializing in the operation of three LNG terminals, these facilities making it possible to regasify liquefied natural gas (LNG), transported by sea, in order to reinject it into the national transport network. “Our terminal is operating at 100% capacity and we are looking to build additional capacity”, testifies, for his part, Olivier Heurtin, president of Dunkerque LNG, the most recent of the four tricolor LNG terminals. Gathered on November 24 by the French Gas Association (AFG), the players in the French LNG sector insisted on the key role of this industry in the energy crisis and the need to start worrying now about its resizing.

Since the Russian invasion of Ukraine and the drying up of Russian gas flows to Europe via gas pipelines, the global LNG market has been in full swing. To replace these precious gas molecules, Europe has indeed imported 38 million tonnes of additional LNG in 2022. “We created a 10% demand shock on the global LNG market, whose production stands at 400 million tonnes. It is enormous “recalled on November 9 last before the deputies Patrick Pouyanné, the CEO of the major TotalEnergies, which itself holds 10% of the market share.

As a result, while the tricolor LNG terminals were only filled to 40% of their capacity until 2021, they are now operating at full capacity. For some, the capacities have even been increased thanks to technical operations, such as pump unclamping. “The capacity of the Fos Cavaou terminal [sur la façade méditerranée, Ndlr] has been increased by 20%, i.e. an additional 17 terawatt hours (TWh), reports Nelly Nicoli. “We are at the max”she insists.

The three terminals managed by Elengy saw their activity soar (+70%) with the reception of 330 LNG carriers in 2022, which corresponds to the arrival of a ship every two to three days. “Which leaves us little latitude and margin, notes Nelly Nicoli. LNG terminals were considered an insurance product [c’est-à-dire à utiliser seulement en cas de besoin, Ndlr]. Today, we play full. There is no longer any insurance, which raises the question of the sizing of the terminals”she develops.

Same reflection on the side of the Dunkirk terminal. “This year, we are going to welcome 140 boats, i.e. one boat every 51 hours”, reports Olivier Heurtin, who does not anticipate a slowdown for next year or the next.

An asset in the crisis

“We should be proud of this industry. It has allowed us to save 5 billion euros compared to certain neighboring markets which are less well equipped. “, argues the leader of Elengy. “LNG, through its flexibility of destination, has made it possible to manage this crisis”abounds Jean-Noël Mesnard, assistant to the LNG director of TotalEnergies.

The multinational, present throughout the LNG value chain, will install a floating regasification terminal (or FSRU for floating storage and regasification unit)currently based in China. “Its capacity is 5 billion cubic meters, i.e. 10% of France’s annual natural gas consumption”, says Jean-Noël Mesnard. The facility is scheduled to remain until September 2028 and could then be repositioned to another part of the world, depending on demand.

The players in the sector are campaigning for an increase in the capacity of regasification infrastructures over the long term. But this expectation comes up against great caution on the European market due to climate commitments which imply an exit from fossil fuels, and therefore natural gas. Indeed, even if natural gas emits half as much CO2 per unit of energy as coal, it contributes significantly to global CO2 emissions and therefore to global warming.

A carbon footprint to reduce

Worse, LNG would emit much more greenhouse gases (GHG) than natural gas transported by pipeline, with a 2.5 times higher carbon footprint (due in particular to its transport and the liquefaction and regasification stages).

The deployment of new infrastructures dedicated to the import of LNG in Europe is also worrying many observers, who fear that these investments will lead to anchoring fossil fuels in the European energy mix.

For their part, professionals in the sector argue that gas has its place in the energy mix of tomorrow. “You have to be persuasive and convincing to show that LNG terminals can play an essential role, both in security of supply et in decarbonization”continues Nelly Nicoli.

Battle to find a place in the energy mix of tomorrow

To convince, the sector ensures the floor to the reduction of the carbon impact of LNG by working on a series of levers: the electrification of the liquefaction stage, the capture, storage and reuse of CO2, or even the hunting for methane leaks and optimizing navigation performance using digital tools. “We must be exemplary to legitimize our industry and keep our right to operate”, says Jean-Noël Mesnard.

Above all, the players ensure that the LNG terminals will be able to play a key role in the deployment of other molecules of the energy transition, such as bioLNG, produced through the liquefaction of biomethane, synthetic LNG (combination of hydrogen and CO2) , or even green ammonia, methanol and hydrogen. “LNG terminals can be used to import LNG dedicated to the production of blue hydrogen [hydrogène dont les émissions de CO2 sont captées, Ndlr]. In terms of energy efficiency, this is the most interesting solution. It is a means of reconciling energy security and climate objectives,” further advances Vincent Demoury, general delegate of the International Group of LNG Importers (GIIGNL).

The Xbox Series S sees its price drop, the cause? Black Friday 2022