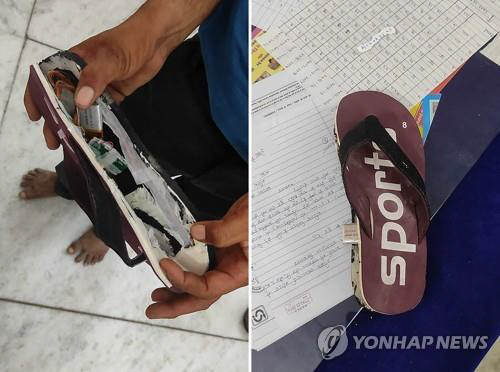 In the state of Rajasthan, India, a horrific incident occurred in Rajasthan, India, when a gang of 1.65 million participants tried to systematically cheat by putting a wireless device in the sole of a sandal in a teacher recruitment exam.

According to The Hindu and AFP news agency on the 28th, 1.65 million people took the Teacher Recruitment Test (REET) in two shifts at 3993 test centers in Rajasthan on the 26th.

The police blocked mobile Internet access during the test due to the experience of detecting cheating using wireless devices in the previous test. Then, an organization that paid money to help cheat installed a Bluetooth device in the sandal so that the examinee could wear it into the exam hall.

The media reported that at least 25 examinees paid 600,000 rupees (9.6 million won) to the organization to purchase slippers with Bluetooth and wireless earphones. Candidates who paid the money only had to write down the correct answer through a wireless earphone placed in their ear, but their plan went to waste when they were caught by the police of a cheating organization who tested whether the equipment was working properly around the test center the day before the test.

As the cheating gang was arrested, candidates were forced to take off their shoes on the day of the exam.

The police plan to expand the investigation, believing that there may be more people involved in addition to the captured cheating organization. 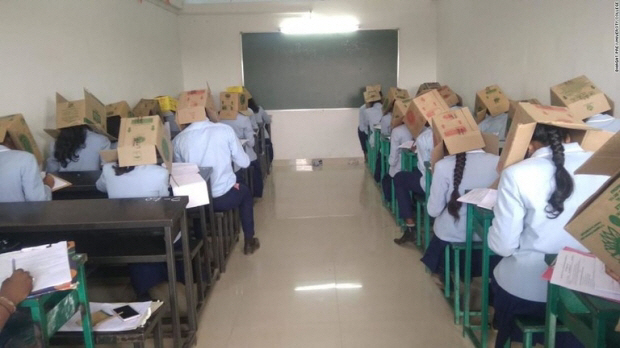 Meanwhile, in India, national exams such as college entrance exams as well as teacher qualification exams are so intense that organizations that rob exam papers or help cheat are active and their methods are evolving.

Earlier, in October of last year at a university in India, a photo of students taking an exam with paper boxes on their heads was spread on the Internet, causing controversy. In 2015, a photo of parents handing cheating papers hanging from the wall of a five-story building during an entrance exam for a high school was spread on social media and was teased by netizens around the world.

Exam cheating has been common in India for a long time, but parents are known to bribe police and education officials. Although the Indian education community has recently increased their enthusiasm for education with the rise of the middle class, it is pointed out that the number of universities is small and the fierce competition for college admissions is also fueling cheating.