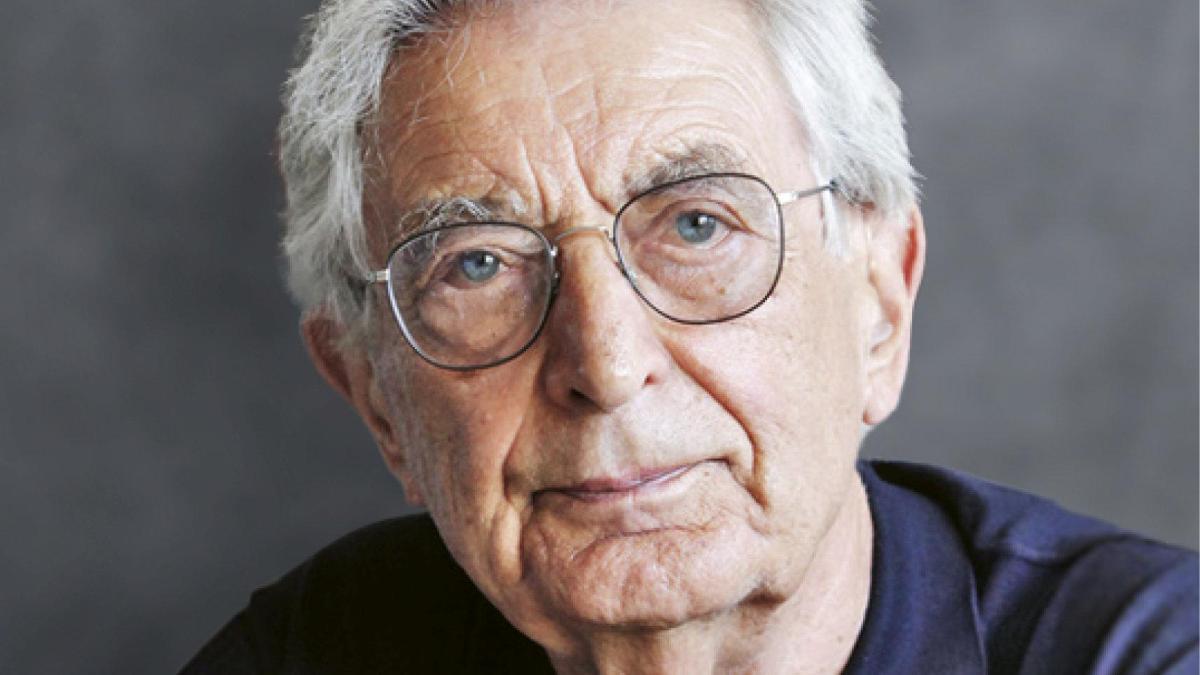 “Books have always been a magnet”: Gerhart Baum remembers how he, born in Dresden in 1932, rummaged through local second-hand bookshops as a twelve-year-old boy. After the bombing of Dresden in February 1945, he fled to Bavaria with his mother and siblings; the father stayed in the war. Baum attended high school in Tegernsee, became a lawyer like his father – and later one of the most prominent FDP politicians in the Federal Republic, including as Federal Minister of the Interior in Chancellor Helmut Schmidt’s cabinet.

As a controversial voice of liberalism and advocate of civil rights, Baum has taken the floor to this day. His book was last published “Freedom. An appeal ” (Benevento Books). Here you can also find out how early Baum’s reading life began – and how much it was shaped by classics. “I’m lagging a bit behind in contemporary literature,” he says, but then immediately drops names like Houellebecq, Didier Eribon, Enzensberger or Marcel Beyer. Below is his personal hit parade, 15 books, recorded by Marc Reichwein.

What is special about this novel is its reference to the roots of the German catastrophe. I read the book as a high school graduate. The reading – encouraged by my teacher – even influenced me so much that I wrote a letter to Thomas Mann in 1953. And man answered directly, he wrote:

“The promptness of my thanks must account for its brevity. Given the incompleteness and temporary inconvenience of my new home in Switzerland, I would like to assure you that you have given me real pleasure with your letter. Often good and friendly things come from Germany, but rarely does it show so much warmth and appealing form. You have won my whole sympathy with your words and the experience that speaks from them, and that is what I can and must tell you. ”

Thomas Mann was, also through his famous lecture on “Germany and the Germans”, which he gave in 1945 in the Library of Congress, an important point of reference for me and my colleagues in Germany’s democratic new beginning.

With Goethe, life and work are inextricably linked, also in relation to women. The relationship with Marianne von Willemer crystallized in the great age poetry, the “West-Eastern Divan”. Willemer inspired Goethe to open up this strange world. Both have expressed their love in it. She herself contributed some poems, which only became known posthumously, which he included in the work as equals, as if they were his own. Their relationship was an unfulfilled love that only took place in letters for decades – and lasted. This resulted in some of his most beautiful love poems, such as the one “On full tufts / beloved, just look!” I read Goethe’s correspondence with this woman, who has so artistically enriched him, over and over again.

I am the son of a Russian mother who emigrated to Berlin with her family, that of a wealthy businessman, before the October Revolution. It was from her, who kept her Russian origins alive for life, that my affinity for Russia comes from, which I traveled to Russia again and again from 1966 in various functions, also in contact with civil society critical of Putin. The Russians in “Meister und Margarita” are therefore familiar to me.

The book is a classic of Russian literature, if not world literature like Gogol’s “Dead Souls”. I read the various translations with pleasure. The unmasking of the people who seek to assert themselves with all their weaknesses in communist society was described in a masterly manner by Bulgakov – as well as the love story and the events in Jerusalem that led to the condemnation of Jesus and his crucifixion.

This is now a very big one, who is on the trail of people without consideration. “Flaubert’s Parrot” by Julian Barnes gives a glimpse into his life. I had known his great novels for a long time, but not the recently newly translated stories. All of Flaubert’s in there. The recently published Flaubert biography by Michel Winock will be my holiday reading.

Chekhov has this absolute sensitivity for people and their complicated relationships. Why are his plays so lively that we approach every new production with curiosity? The stories are of equal weight.

Ina Hartwig: Who was Ingeborg Bachmann?

Bachmann fascinates me in two ways: as a writer, but also as a personality who has faced life’s challenges in an unconventional way and sometimes almost surrendered it. Ina Hartwig dedicates herself to work and person knowledgeably and vividly. She conducted many interviews with people who knew Bachmann. Bachmann’s relationship with Henry Kissinger is also interesting – the two met at a Harvard summer school and stayed in contact throughout their lives. We still don’t know enough about Ingeborg Bachmann. The total edition is slowly growing. Where are the correspondence, especially the one with Max Frisch? But at Hartwig you learn a lot – also a lot of new things.

I could also have mentioned the early Hofmannsthal here. Or Rilke’s “Duineser Elegien”, which I worked through piece by piece with my teacher at Tegernsee. Or Stefan George, Georg Trakl, Thomas Kling. Rolf Dieter Brinkmann, Paul Celan and of course Goethe. I am a passionate poetry reader.

With Fried it is above all the love poems. They belong to world literature. And there was a personal encounter. Fried wanted to get to know me, who back then not only relied on the police and the judiciary to fight extremism and violence, but also had the causes researched.

Instead of “old masters” I could have called “frost” or “wood felling” – almost everything from him. I am impressed by the power of his language and the sharpness of his observation. How did the man cope with his life, his terminal illness, his relationships? His brother gives new insights in the recently published book entitled “A life by Thomas Bernhard’s side”. Contemporary witnesses such as Claus Peymann should also be mentioned. And of course Bernhard speaks through his plays.

This is the old work of a man who died a month before it was published. A man who looks at life calmly, calmly, but also soberly, and at the same time is calm – carried by the awareness that you have to take people as they are and that life is worth living despite everything.

Marcel Proust: In the shadow of young girls

I avoided Proust for decades, even if his magnum opus “In Search of Lost Time” has been in my library for a long time. Last year I dared to read a part of the volume. The description of his vacation stay in Normandy and the women he observes there give an insight into the power of his nuanced language with all its facets. I will read more of it.

Durs Grünbein: The years in the zoo

An excellent and also very versatile, stimulating author. I like to read it. Dresden is the one point of reference that connects me to Grünbein. The other is political. I credit the author for how he acted against Uwe Tellkamp and the intellectual background of Pegida. The fact that there is such an intellectual breeding ground for those who despise the system in my hometown has always pained me.

When it comes to the milieu of the New Right, I think of Julien Benda with a view to the 20th century; his work “La trahison des clercs” – “The betrayal of the intellectuals” appeared in 1927. Benda problematized the tolerance of intellectuals towards totalitarian systems in an almost prophetic manner and should – with regard to communism and fascism – prove to be right. Especially in our time, when freedom is more and more in danger, I would like to see more intellectuals who do not interfere in party politics, but who stand up for the value of a life in freedom.

Camus was a man who defended freedom with no ifs or buts. Even as a young man, I was inspired by his ethos of freedom. Unlike his contemporary Sartre, he did not allow himself to be seduced by political ideology. Sartre accepted the Stalin Prize. Sartre later turned away from Stalin and turned to another human criminal, the Chinese Mao Tse Tung. What an aberration that so many have followed! Camus’ incorruptible plea for freedom is relevant again today, at a time when authoritarian regimes and authoritarian behavior often only meet half-hearted resistance.

Hannah Arendt: The freedom to be free

“We were born to be free” – that is the current message of a woman whose life was marked by persecution and displacement and who has grappled with her identity as a Jew and with anti-Semitism throughout her life. I’ve read a lot about her. This essay gets to the heart of your thinking. Arendt teaches us that freedom always goes hand in hand with responsibility and is extremely fragile.

Dahrendorf motivated us younger people with his comprehensive analysis of “Society and Democracy in Germany” from 1966 and influenced the modernity of the 1968 movement. In this, his last book, he warned of a new counter-enlightenment in 2008. The sociologist Andreas Reckwitz today accurately analyzes the end of illusions in late modernity. From his point of view, we are not experiencing the end of globalization and digitization, but the end of a hyperdynamic early phase of late modernism.

I just want to name one of his works as a representative. It concerns the Iraq war, but at its core it is about the history of international law and its current challenges. As a human rights activist, traveling around the world in various functions for Germany and for the United Nations, I learned a lot from Habermas. The vision is the individual person as an object of protection of the international legal order, if need be, also against their own state. It is not an anonymous machine that is responsible for crimes, but also here the individual person who, under certain conditions, has to answer in court. International law, the United Nations, brought us closer to this world order.

During the pandemic, I also mutually exchanged views with Habermas about the importance of protecting life in our basic ethical order. The basic right to life and to physical integrity has all too often been relativized in recent months and considerations of utility have been suspended. Whoever dies although he could have been saved, loses all basic rights – and not just one or the other. He won’t get it back even after the pandemic. One should consider how many people have been saved from death and disease by lockdown and other restrictions.