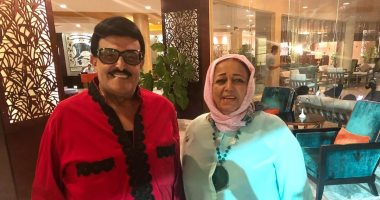 The artist, Hassan Al-Raddad, was keen to share with his followers and fans a picture of the wheel of memories that gathered his late mother with the late great star Samir Ghanem, who left our world a few days ago at the age of 84.

Al-Raddad was satisfied with placing a lot of red hearts on the photo that he posted on his personal account on the Instagram website for the departed, his mother and the great star Samir Ghanem, father of his wife, artist Amy Samir Ghanem.

The great star Samir Ghanem left our world, Thursday, May 20, at the age of 84, after he was ill during the past days, as he suffered from a defect in kidney functions, and was subsequently transferred to the intensive care room in a Mohandessin hospital, and his health deteriorated in the past days. Until he breathed his last there.

Samir Ghanem was born on January 15, 1937, and graduated from the Faculty of Agriculture, Alexandria University, then met with George Sidhom and the guest Ahmed, and together they formed the famous “Adwaa Al-theater Trio”, a comedy singing group that shined on the stage by presenting a group of comedy sketches, the most famous of which was ” The Malaika Cooking” and “Romeo and Juliet”, then the three presented a number of successful films and plays.

The band dissolved after the death of the guest Ahmed in 1970, and he went with George Sidhom to act together in several plays, the most famous of which was the play “The Married Ones.” The last theatrical work for them together was the play “Welcome, Doctor.” He presented a series of Ramadan Fawazeer under the names of the characters “Samoura” and “Fatouta”, and then returned in Ramadan in the early nineties to present the Fawazeer of singers and laughers.