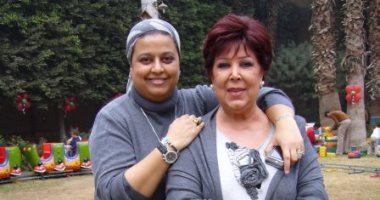 Amira, the daughter of the great artist Rajaa Al-Jeddawi, revealed in special statements to “the seventh day”, the health condition of her mother after 6 days in the quarantine in Abu Khalifa Hospital in Ismailia.

And Amira Hassan Mukhtar, the daughter of the great artist Rajaa Al-Jeddawi, said that her mother has improved her health condition, and that she has no symptoms of corona except a rise in temperature, and her health problem continues until now in the temperature that rises and then decreases, which is repeated repeatedly.

“Amira”, the only daughter of the artist, Rajaa Al-Jeddawi, expressed her deep annoyance with the pages of the Social Media, which deals every hour with the news of the death of the able artist, saying, “The owners of those pages must take into account that there is a family that suffers from these rumors”, asking all those who love to pray to her mother In order to graduate from the quarantine in Ismailia.

The result of the first laboratory analyzes of Rajaa Al-Jeddawi, positive results appeared for Corona virus (Covid-19), which is the first analysis done by the great artist since they entered the quarantine in Ismailia.

Major General Sherif Fahmy Bishara, Governor of Ismailia, had today, in large numbers, a telephone call to the great artist Rajaa Al-Jeddawi, during her quarantine in Abu Khalifa Hospital in Ismailia.

It is mentioned that the great artist Rajaa Al-Jeddawi participated in the last Ramadan drama season in the series “The Game of Forgetting”, starring Dina El-Sherbiny.