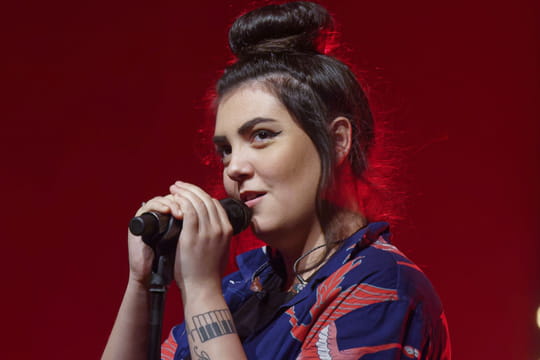 HOSHI. On the set of Cà VOUS, the singer Hoshi, mocked on her physique by the musical columnist Fabien Lecoeuvre, reacted to these sexist remarks.

[Mis à jour le 14 avril 2021 à 11h57] “It’s not normal to hear that on TV in 2021.” Guest of C à Vous on France 5 Tuesday evening, the singer Hoshi, attacked on his physique last week by Fabien Lecoeuvre, musical columnist and press officer, responded to the sexist insults held by him. “I didn’t cry about it, but it really hurt my heart (…) there are 15-year-old people who want to get into music and who will see it and in fact, beyond what he says, it’s something that happens all the time in this society and in this environment, and it is serious to let things like that be said, it can discourage some young people who have not confidence in them “, explains the singer to Anne-Élisabeth Lemoine. And to add: “Frankly, it hurts your heart. It is not normal to hear that on TV in 2021 and it is deeply hurtful for me, for my family, for the people who listen to me, it’s hard.”

Contrary to what Fabien Lecoeuvre suggested in his “argument”, namely that the music labels maintained this sexism, Hoshi ensures that it is not. “I did not take pictures to arrive in a record company”, she explains, before deciding: “he calls that a skid, I think it was deeply thought.” After his remarks, Fabien Lecoeuvre had published a press release in which he apologized for his comments against the young singer. “I offer my sincere apologies to Hoshi, to all the artists and their entourage, whom I hurt by my inadmissible words and unworthy of the love I have for French song”, he wrote, adding to regret “very deeply those unfortunate words, “which he describes as” slippage. ”

See Also:  "I have always been on the feminine side," says José Ramón Prieto

Michel Polnareff’s press attaché, Patrick Sébastien’s sidekick in The happy years or Cyril Hanouna in Do not touch My TV drew the wrath of social networks by judging the singer of Your striped sweater on his physique in an interview with the Arts-Mada webradio. “When are we going to come out with handsome guys? Or sublime girls? When you look at Hoshi for example, who has an incredible, indisputable talent … But hey, you put a poster of Hoshi in your room. ? She is scary! “, Launches the columnist in front of a smiling presenter.

And to add: “I have nothing against this girl who is brilliant (…), but that she gives her songs to sublime girls, like there are Vanessa Paradis, like there were Vartans , Sheilas at 20 or Françoise Hardy … There are plenty of magnificent performers. ” Perfectly sexist remarks relayed in a video viewed more than 500,000 times and which obviously made the Web jump.

On Twitter, many artists and anonymous people affirm their support for Hoshi in the face of “an odious speech, stupid and nasty”, for the host Emilie Mazoyer. “So serious to hold this kind of thing. We offer him a poster or a mirror? I hesitate,” Hoshi wrote on Twitter, sharing the famous video. “Crazy that no one has said anything on the air”, adds the singer Coeur de Pirate, when the journalist Hugo Clément addresses his “total support for Hoshi who is a great artist (and that’s all that matters)”.

“Fabien Lecoeuvre, shame on you. You are vomiting. You are the monster, the ugly, the error. It is the pin-ups that we hang on the walls to look pretty, not the artists. Hoshi je t ‘love and you are sublime,’ adds singer Clara Luciani on Instagram. An indignation which pushed the author of these remarks to apologies, failed, in which he evokes “clumsy remarks taken out of their context.”