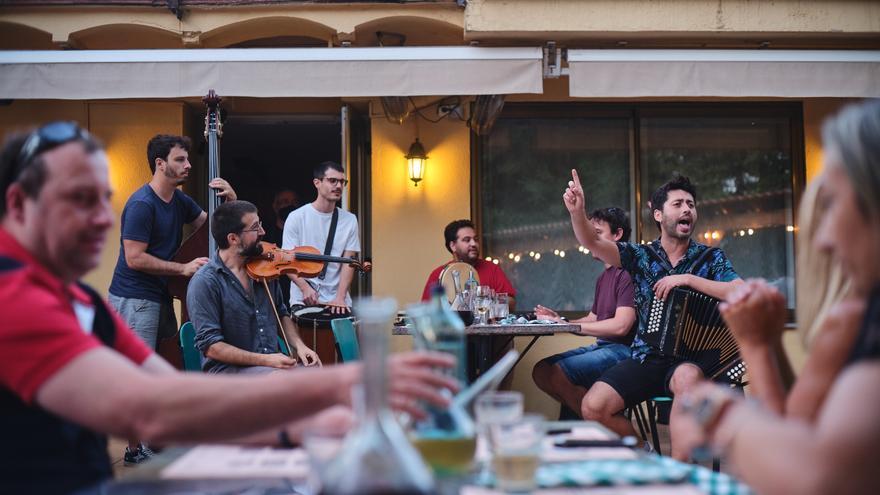 Performance by Germà Negre in one of the singing concerts of the second edition of the Hostal Càntut, in the Can Servatà restaurant. Wednesday, July 21, 2021 (Horizontal)
x

The project Singing. Songs of oral tradition has “successfully” closed the second edition of the Hostal Càntut, six dinners to sing which have taken place this July at the terrace of the Can Selvatà Restaurant of Cornellà del Terri. Born to recover the old practice of singing in community in hostels and taverns, the call has sold out in five of the six meals. The banyolins Black Brother they performed two nights, and also participated The Anchovies, The Trampling Pony i Quico el Célio, el Noi i el Mut de Ferreries. There was also a singers’ dinner hosted by Gemma Pla. All in all, around a table with traditional Catalan cuisine, always following the protocols to maintain safety in the face of the health situation.

On the other hand, its organizers recall that the Càntut project was born to vindicate and disseminate songs of oral tradition in Catalonia, and continues to work in different branches such as the archive, its own productions and the festival, which will take place from November 19 to 21, 2021 with concerts, exhibitions, workshops and other activities around oral transmission songs.

As for the online songbook, it currently has 1,464 songs on different topics, compiled in audio and video by about sixty song hunters, and sung by elderly people from the Girona region. In addition, they have been transcribed 655 songs to scores, making all this repertoire available to anyone who wants to use it in different formats.

As for the own productions, until September 12 you can see the exhibition Peret Blanc de Beget, a sample of the project Cantut and the Esdansa, at the Archaeological Museum of Banyoles, as part of the Ethnocatalonia. Considered the last solfess musician in the country, Pere Sala (1917-1993) walked through villages, hermitages or farmhouses with his instrument on his back to liven up the festivities.

On the other hand, Paula Grande and Anna Ferrer continue with the tour to present Càntut’s second record, ‘Vega’ (Bankrobber, 2020), with various performances, such as this Wednesday at the Museum of the History of Catalonia (Barcelona), in Palamós as part of the Amb So de Cobla festival (August 6), at the Esdansa in Les Preses (August 27), and in Cassà de la Selva, at the Càntut Festival, in the autumn.