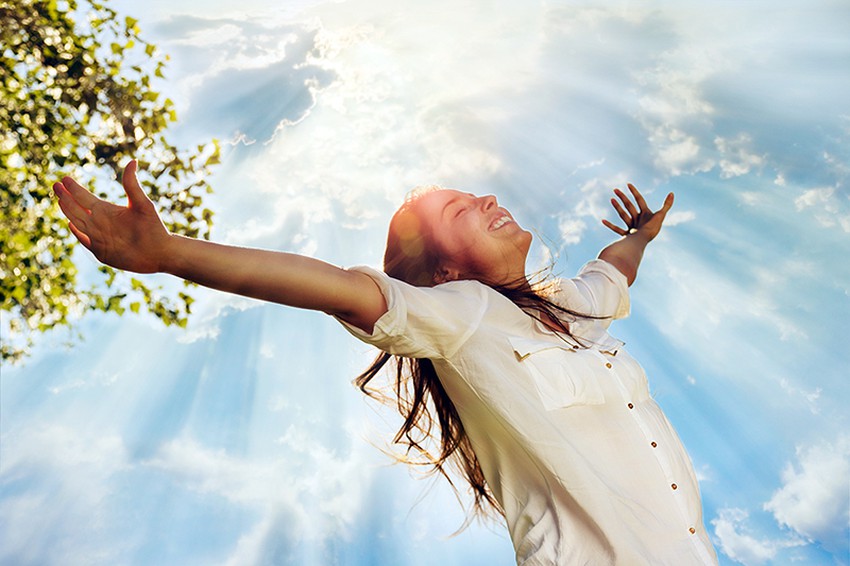 Arabia weather Humans instinctively tend to be attracted to sunlight and bright spaces, whether at home, at work or outside, dark homes and workplaces often carry a negative connotation, but some may not know why!

Humans are attracted to the light for biological and psychological reasons, and there is a close link between the sun and mood, which we will learn about in this article, and to the positive effects of the sun, and how we can better integrate it into our lives.

What does the sun do to us?

The human body makes vitamin D when it is given an adequate amount of ultraviolet B rays. There are two types of vitamin D: (D2) and (D3), Where the body converts (D2) stored under the skin to (D3) with the help of sunlight, which is the form usable in the body, The body then uses the active form of vitamin D in many vital processes in the body. Here are some of these processes and the benefits of vitamin D:

Vitamin D in its active form helps with various processes in the body, such as: absorption of calcium, phosphorous and other vital nutrients. Vitamin D is known to be important for bone growth and rebuilding, cell growth and immune system function, and can help reduce inflammation in the body. Vitamin D, which is thought to contribute to cardiovascular disease, cancers, and many chronic inflammatory disorders, and vitamin D, along with calcium, help reduce osteoporosis in the elderly.

Scientists have found that there is a link between Low levels of vitamin D and various mood disordersVital nutrients also increase the body’s sensitivity to insulin, and it is important for the body to maintain insulin sensitivity to avoid type 2 diabetes, which can occur when a person’s body becomes insulin resistant.

How does sunlight affect the improvement of mental health?

The bright sun is still gaining attention in health circles as one of the best natural resources for the body. Research has found that being in nature with sunlight reduces stress, and that sunlight is associated with positive effects on mental health, especially in people with mental disorders. The following are some of these disorders and their relationship to sunlight:

Some researchers believe that vitamin D deficiency can contribute to obsessive-compulsive disorder (OCD), and rare cases of seasonal OCD have been reported, especially in cold climates and times of limited exposure to the sun during the winter months. ‘Phototherapy’, where a person is exposed to bright light for a period of time to increase vitamin D levels.

The sun, depression and anxiety

Some research has shown that getting enough vitamin D, especially from the sun, improves mood and reduces symptoms of depression. Vitamin D receptors are found throughout the brain, and many parts of the brain are areas associated with mood disorders. High levels of anxiety with low levels of vitamin D.

Acquire Seasonal affective disorder (SAD) It has gained interest among medical professionals as a mental health disorder that affects many people during the winter months, when there is less sunlight.

AndOne of the benefits of sunlight that can help people with seasonal affective disorder is its effect on melatonin production. Melatonin is a chemical that helps regulate the sleep cycle and helps people sleep better. People who are exposed to sunlight early in the day make melatonin earlier at night, which makes falling asleep easier.

Sunlight also helps people with seasonal obsessive-compulsive disorder, and seasonal affective disorder can sometimes be treated with phototherapy, especially in areas where there is less natural sunlight.

Other psychological disorders and their relationship to sunlight

Affected people may suffer Symptoms of bipolar disorder worsen during fall and winter With less sunlight, light therapy may relieve symptoms in people with bipolar depression.

One study of vitamin D and mood disorders highlighted the fact that “people who spend time outdoors may be more physically active,” concluding that “It is important to consider whether sunlight alone or in combination with physical activity is associated with improved mood.”, where Walking outdoors is also associated with better moodThe positive effects they feel after exposure to the sun may also be a result of their physical activity.

How can you get more sunshine in a safe way

The benefits of sunlight are plentiful, and the best way to expose yourself to more sunlight, and thus get more Vitamin D, is to spend more time safely outside. Brief exposure to the sun in a safe manner with the use of sunscreen and at times of the day when the risk of sunburn is low can help boost vitamin D levels.

Consider exercising outside in nice weather and taking short breaks working in the sun. If you’re a business owner or CEO, consider incorporating the natural environment and sunlight into your workspace and employee spaces. People who strive to bring more sunlight into their days may see benefits in their mental and physical health.