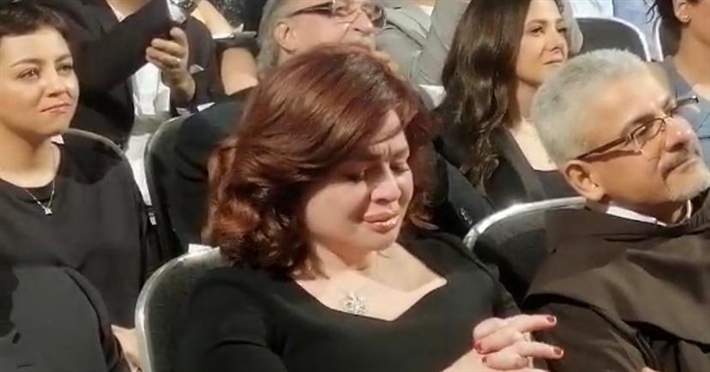 The star Ilham Shaheen could not hold back her tears while the singer Ghada Ragab sang on the stage of the opening ceremony of the Catholic Center Festival, for the departed stars.

Elham Shaheen cried when singing a man’s raid for the late stars, especially since in this 70th edition of the Catholic Center Festival the name of the late Samir Ghanem is being honored.

The great star Samir Ghanem died on May 20, 2021 at the age of 84, after a struggle with illness, after which he entered a hospital for 6 weeks, and his last work was a propaganda campaign for a telecommunications company with his daughter, Amy Samir Ghanem.

The ceremony will witness a special tribute to the name of the late artists Samir Ghanem and Dalal Abdel Aziz during the opening ceremony of the festival, and this honor will be received by their two daughters, the artist Donia Samir Ghanem. It is a strange irony that the first anniversary of the death of the artist Samir Ghanem falls on the same day he was honored at the festival.

The jury for this session was formed under the chairmanship of director Ali Idris and the membership of each of the artist Ilham Shaheen, the artist Bushra, the artist Ahmed Salama, the director of photography Ahmed Abdel Aziz, the editor Dalia Al-Nasser, the scriptwriter Ashraf Mohamed, and the art critic Magdy Al-Tayeb, had met earlier at the end of the month. Last January, over two days to watch the films participating in this session, and to determine the festival prizes.

This year, five films out of twenty-eight films that were shown commercially or on platforms in 2021 will compete in the festival, and the participating films are: “Breakable” by Ahmed Rashwan, “For Rent” by Islam Bilal, “The Court” by Muhammad Amin, and “The Court” by Muhammad Amin. Outside the Method” by Amr Salama, the movie “Ritsa” by Ahmed Yousry.

Yousra talks about her artistic beginnings and her father’s threat to kill her: It was a shame for women to work in the cinema

Sumaya Al-Alfi reassures the public of her health: Doses of chemotherapy are becoming less and my hair will start to appear (video)

Bushra mourns Samir Sabry in tears: I am sad that I am not beside you (audio recording)