Protesters approach a bus set on fire by protesters in front of the National Palace to demand the resignation of President Alejandro Giammattei, in Guatemala City, on Saturday, November 28, 2020. (AP Photo / Moisés Castillo)

A group of hooded protesters burned a bus this Saturday on the corner of the National Palace of Culture (Government office) of Guatemala, in the midst of the peaceful citizen protest that was taking place against the Government and Congress.

The incident occurred within the framework of thousands of Guatemalans returning to the streets in protest against corruption and demand the resignation of President Alejandro Giammattei, a week after another demonstration turned violent and left several injured by the police and the partial burning of the legislative building.

The group of hooded men burned a Transurbano unit, a fast bus system, after three hours of protest without incident and in calm conditions. The Voluntary Fire Department arrived on the scene to put out the fire in the presence of a contingent of the National Civil Police and some 7,000 protesters who were protesting peacefully. 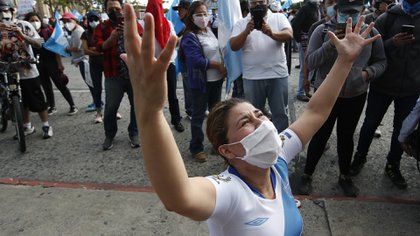 A protester outside the National Palace calls for the resignation of Alejandro Giammattei. (AP Photo / Moises Castillo)

Demonstrators target the president and all members of the national Congress for being responsible for voting with opacity a budget that was later annulled, due to popular pressure.

“The people should not be afraid of their governments, governments should be afraid of their people”, “We lack a poster for so much anger”, “Out with the corrupt”, “Confinement of politicians, freedom to the people”, read some of the posters that the protesters carried on the way to the Central Plaza, in front of the National Palace of the Culture, former seat of government.

In this call for the movement called # 28N, made by social networks, various sectors of civil society participated. 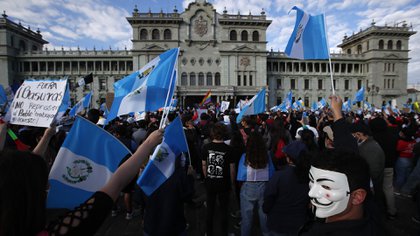 Protesters gather in front of the National Palace to demand the resignation of President Alejandro Giammattei, in Guatemala City, on Saturday, November 28, 2020. (AP Photo / Moises Castillo)

Several protesters have called the protest as “Revolution of the frijoleros”, in response to the comments of a conservative deputy related to the government who called them “eat beans.”

Among the demands of the opponents are the request for the resignation of conservative Giammattei, who has only been in power for 10 months, and of all the deputies, for having approved a budget for 2021 which they criticize for not addressing the most urgent problems of the country, such as poverty, health and education.

A week ago the demonstrations degenerated into the partial burning of the Parliament premises. Also, at least two people were injured in the eyes allegedly by the impact of tear gas bombs thrown by the police and more than 35 were arrested.

Images of the congressional fire that occurred last week in Guatemala

Amid the pressure, the Congress, with a pro-government majority, had to eliminate the new budget.

In Wednesday’s session, where the issue was evaluated, Deputy Rubén Barrios, from the Valor party, said, challenging the protesters: “Only our knees bow before God, and in front of any bean eater we will be standing all the time.”

“The beans we want you to resign”, “Giammattei outside ”, the protesters wrote on other posters, while a group of university students shouted in unison“ Fascist President, you are the terrorist ”.

The protesters wore masks, as a health security measure for the new coronavirus pandemic, and carried blue and white Guatemalan flags.

The National Palace of Culture, the epicenter of the protests, was heavily guarded by the police. 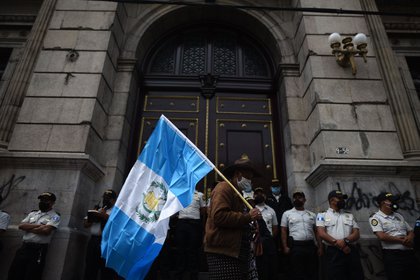 Indigenous authorities of Guatemala demonstrating against the country’s president, Alejandro Giammattei, and warning him that they have the capacity to paralyze the country, on November 24, 2020 in Guatemala City (Guatemala). EFE / Edwin Berc an / Archive


This time there were no demonstrations in front of Congress, where on Saturday violent clashes with the police were recorded.

The right-wing Giammattei, elected for a four-year term, he called for a national dialogue to readjust the budget and simultaneously denounced attempts to destabilize democracy.

Giammattei asked for the intervention of the OAS, pointing out that the protests were from minority groups who were trying to carry out a coup. The OAS sent a commission headed by former Argentine deputy Fluvio Pompeo, who was disqualified by various organizations arguing that he had allegedly participated in a failed business of the Argentine government and the former administration of Jimmy Morales.

Vice President Guillermo Castillo, who asked Giammattei to both resign for the good of the country, declined to meet with Pompeo.

Meanwhile, the The Guatemalan Association of Journalists (APG) asked the UN and the Inter-American Commission on Human Rights (IACHR) this Saturday to send their respective rapporteurs for freedom of expression to the country, due to attacks and penalties registered in recent days.

“There have been a series of events of aggression and penalization of journalists and against the people that it has peacefully demonstrated in various places, ”the journalistic union organization emphasized in a statement requesting the presence of international entities.

With information from AFP, EFE and AP

Protesters seized the Guatemalan Congress and set it on fire