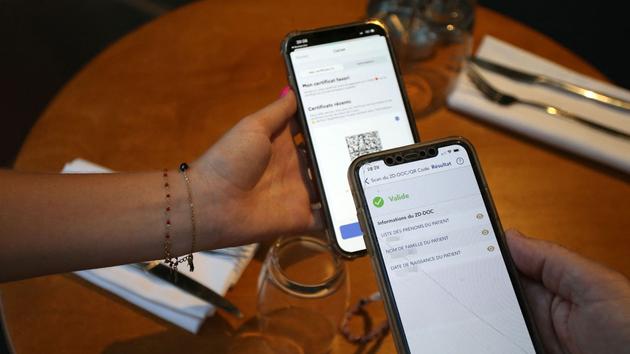 FOCUS – Le Figaro takes stock of the health pass, which will soon be extended to bars, restaurants, trains and planes.

“We need it right away”, argued the Minister of Health Olivier Véran. And “We will put an end to it as soon as we can”, he told the Parisian. Entered into force on June 9 for fairs, shows, stadiums, or concerts, the health pass became mandatory on July 21 in places of leisure or culture where the gauge reaches 50 people. From the beginning of August, it will be extended to bars, restaurants, trains, planes, retirement homes … This precious sesame, which can be imported via a QR Code in the TousAntiCovid application, complies with European health passes for travel to Europe. A free telephone assistance system is available to users 7 days a week, from 9 a.m. to 8 p.m., on 0800 08 71 48.

• How does he present himself?

It can contain three different data: a complete vaccination certificate, with two doses when the vaccine requires it, and this for at least one week (two weeks to travel), an immunity certificate proving contamination in the last six months and remission for at least a week, or a negative test dating back less than 48 hours. Certificates in paper format are given at the time of vaccination. The health pass can also be downloaded from the Health Insurance website for vaccinated people and on the SI-DEP portal, for people who have tested negative or have their immunity to Covid-19. Those who wish to use the digital version can import it into the “Notebook” function of the TousAntiCovid application. Using the TousAntiCovid Verified reader application, staff in establishments open to the public and event organizers will be able to check the validity of the pass by scanning the QR Codes.

• Where should it be presented?

At the beginning of August, everyone will have to bring a sanitary pass to go to the restaurant, bar or café. The terraces are ultimately concerned, against the advice of the senators. Around August 10 (date not fixed), the pass will be required on long-distance trains: TGV, Intercités and night trains. But not in everyday transport (such as TER, RER, Transilien, metro or bus). Campsites, holiday centers and hotels which only have an accommodation offer will not be subject to it. On the other hand, the campsites which have a swimming pool or an auditorium require it.

In August, visitors and patients will have to present a health pass to go to a hospital or nursing home, except for medical emergencies.

The 50-person tonnage, retained as the threshold for applying the health pass in certain establishments open to the public, is no longer determined according to the capacity of this establishment, but according to the actual occupancy of the premises. For example, if a cinema screening is attended by 49 people while its reception capacity is 50 seats, the establishment may be exempt from the health pass. “If they sell less than 50 seats and therefore plan to accommodate less than 50 spectators, the health pass does not apply”, specifies the Ministry of Health. In August, visitors and patients will have to present a health pass to go to a hospital or nursing home, except for medical emergencies. Places of worship are subject to a health pass for “Visitors who decide to go to these places of worship, but not for the religious activities that take place there, such as religious ceremonies”. For a wedding, if the entire ceremony takes place in a private location, the pass is not required. Shopping centers will be affected by decision of the prefects.

The health pass will primarily concern all adult citizens. Foreign tourists will also have to comply with the obligation. Children aged 12 to 17 will only be affected from September 30. Employees of places where the health pass is required will be subject to it as of August 30. An employee without proof will be suspended, without pay. If the situation continues for more than three days, the person will be called for an interview in order to examine “the means of regularizing his situation, in particular the possibilities of assignment” to a position not subject to the obligation of the pass. On the other hand, the joint committee agreed that the employees could not be made redundant, contrary to what the government wanted.

Read also :Is it legal to fire an employee without a health pass?

The bill makes compulsory the vaccination of staff in hospitals, clinics, nursing homes and retirement homes, firefighters, certain soldiers, as well as for professionals and volunteers with the elderly, including at home.

• What are the sanctions?

As regards penalties, the legislator followed the recommendations of the Council of State, favoring a system of contraventions. For those who contravene the obligation to present a health pass in due form, we find the state of emergency and confinement regime now included in the public health code. Thus, a fixed fine of 135 euros is provided for, payable within 45 days. In the event of a repeat offense, a fine of 1,500 euros will be imposed. For those who will have to control, that is to say “An operator of a place or an establishment, a professional responsible for an event or a transport service operator”, who do not respect the obligation of control, they will be put on formal notice by the administrative authority, then the place may be closed for a maximum of seven days. “If such a violation is verbalized more than three times during a period of 45 days, the penalties are increased to one year of imprisonment and a fine of 9000 euros”. They thus become a crime.

Read also :Covid-19: diving into the world of vaccination fraud

The use of a fraudulent pass will be sanctioned with a fine of 135 euros – six months’ imprisonment and a fine of 3,750 euros if this occurs more than three times in 30 days. The penalties in the event of degradation of a vaccination center will be increased.