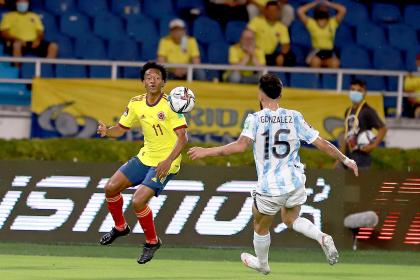 Juan Guillermo Cuadrado is, strictly speaking, a wild card: he is the card that completes the deck in the Colombian National Team, the one that fulfills all the functions and does it at the highest level, the one that solves problems.

It is, as the Royal Academy of the Language says, that “person or thing that serves various purposes, according to the convenience of those who have it.” And what makes it even greater is that it is the definition par excellence of a ‘team’ player: he defends, recovers, assists, scores if he is given a choice, and never fails when things get more difficult.

Just like this Tuesday in Barranquilla: Colombia went from the anguish and the threat of a very bulky defeat to the confidence of the final draw 2-2, in large part because the number 11 took the lead and took the team forward, with the same The impetus with which he reprimanded Dávinson for Paredes’ goal, then joined Muriel to start taking them all out of that well of two goals in just 8 minutes and believed, always and decisively, until he assisted Borja for the unthinkable equality.

Rueda found in Cuadrado a great option as a winger against Peru and against Argentina at the start, and also as a winger, his usual position in Juventus, when he decided to bet on Yairo Moreno to burn the ships for a local point. answered the good son of Necoclí because he does not know how to do anything else when he dresses yellow.

Cuadrado was indisputable before with Pékerman, to the point that on the day of the 8 changes against Japan, in the 2014 World Cup in Brazil (4-1), he was one of the few untouchables. And then for Queiroz, who placed him as an inside and found in him more than one solution: “we work a lot with Juan, he can play as a defender, midfielder, forward and with a little more work he can even be in goal,” said some once Portuguese.

Now, in the absence of Falcao or even James, he is an assistant and a marker, he is an official and private spokesman when it comes to motivation in the dressing room, he is a small coach on the field for Rueda and a leader, one of the good ones, of those who speak loudly and acknowledge mistakes with that same good attitude. Cuadrado has long claimed the captain’s armband that few now dispute. He earned it with football, with character, with experience and personality. But more than anything and above all else, he earned it with talent. They are him and ten more in this new era. Nothing changes.