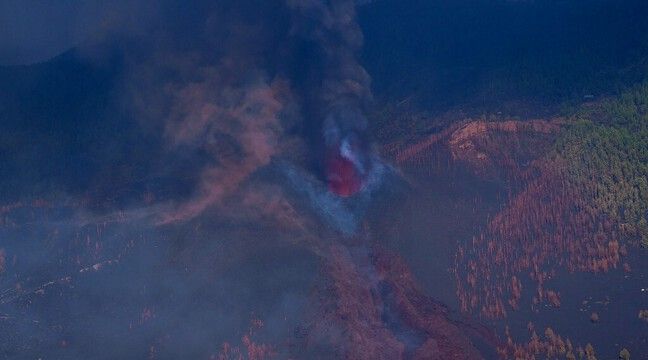 The lava spewed out by the volcano the Spanish island of La Palma, in the Canary Islands archipelago, and cascading into the Atlantic Ocean continued, this Thursday, to gain ground on the sea, already forming an advance of more than ten hectares.

If the magma will initially have a devastating but localized impact on the marine ecosystem, it could ultimately have a beneficial effect by creating rocks that can be colonized by a number of species, say scientists.

Good news for the ecosystem?

After traveling six kilometers since the eruption began eleven days ago, devastating everything in its path, the lava flow reached the sea overnight from Tuesday to Wednesday. Falling from a cliff in a rare sight, it solidified to create a kind of peninsula. This advance “already exceeds ten hectares,” said Thursday the spokesman of the Canary Islands Volcanological Institute (Involcan), David Calvo, who specified that more precise measurements would be carried out in the coming hours using drones. In total, lava now covers 476 hectares of this approximately 70,000 hectare island, according to the local authority of La Palma.

The eruption, which left no deaths or injuries, resulted in the evacuation of around 6,000 of the island’s 85,000 inhabitants and the lava destroyed 855 buildings, according to the satellites of the European geospatial measurement system Copernicus . According to Fernando Tuya, researcher in biodiversity and conservation at the University of Las Palmas in Gran Canaria, the first effects of the entry of lava into the sea are “devastating” with “the direct death of organisms that will be buried” under the casting. But in the longer term, this could constitute “good news” for marine life which could be “enriched” by it. “The lava will form a rocky platform which will be a substrate for a number of marine species which will be able to colonize it in the future, that is to say in three to five years”, continues this scientist, according to whom the phytoplankton could also be enriched by the iron contained in the magma.

Feared by experts, the meeting between lava and sea did not lead to the most feared effects such as explosions of volcanic material. But on the other hand, it produced potentially toxic gases. “The sea water is at a little over 20 degrees and the magma at over 1,100 degrees” and their meeting “has for an effect an immediate change: the magma solidifies and enormous quantities of sea water s ‘evaporate, giving rise to clouds which contain chlorine,’ Arnau Folch, vulcanologist at CSIC, the higher council for scientific research, told AFPTV.

In order to avoid poisoning, the local government of the island has asked the inhabitants of several neighborhoods of Tazacorte, a town where lava has thrown into the sea, to seal themselves in their homes. A security perimeter with a radius of 3.5 kilometers has also been set up as well as a maritime exclusion zone of two nautical miles. However, the authorities want to be reassuring thanks to the action of the wind.

Strong winds will blow Thursday and Friday over the Canaries and “will disperse gas emissions from the volcano to the ocean, so there will be no problem for the air quality in inhabited areas,” assured the press Rubén del Campo, spokesperson for the Spanish meteorological agency.

Farmers on the island have also been allowed to join farms outside the security perimeter to collect bananas, one of La Palma’s main resources, or to irrigate crops. The two previous eruptions in La Palma took place in 1949 and 1971. They had killed a total of three, two of them by gas inhalation.