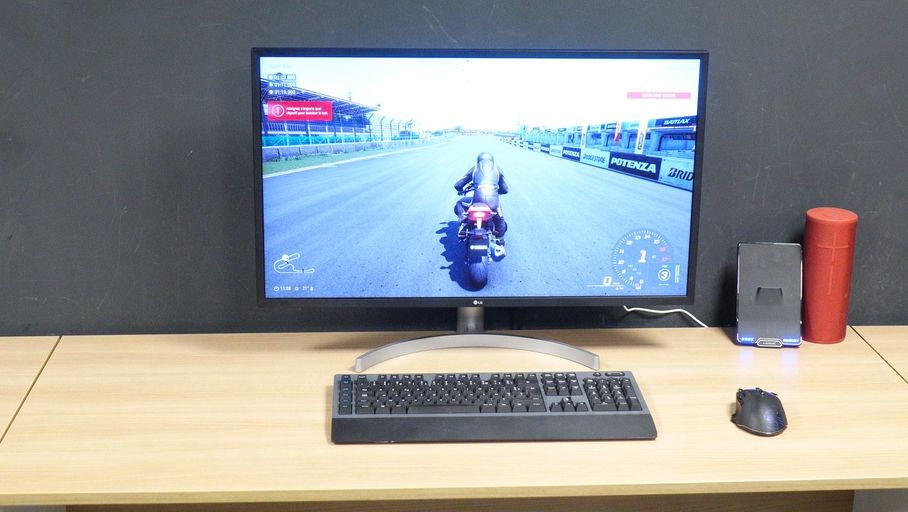 From the front, the LG 32UL500 is a fairly classic monitor. The black plastic around the screen is neat and the whole thing is pretty well put together, especially at this price point.

The semicircular foot gives a little premium touch to this screen, but in fact it’s still plastic and the stand itself is very light.

This monitor is satisfied with a single adjustment, that of the inclination (between -5 ° and + 15 °). It has no rotation or pivot for switching to portrait orientation and, more handicapping, no height adjustment. The latter is less important on a 32-inch monitor than on a smaller model, but it is still inconvenient not to be able to adjust the height of the screen to avoid some fatigue in the neck and back.

The rear contrasts with the front since it is entirely in glossy white plastic. The connections are oriented perpendicular and there is no cable passage system at the foot. It is therefore necessary to be cunning to make the cables disappear behind the monitor as well as possible. The screen is compatible with VESA 100 x 100 mounts by removing the original stand. Finally, last detail, LG provides HDMI and DisplayPort cables in white color well matched with the back of the monitor.

The connection consists of two HDCP 2.2 compatible HDMI 2.0 inputs, a DisplayPort input, as well as a headphone output. It also has two 5W speakers that do not replace a speaker kit for pc, but which remain practical for viewing short videos.

The clickable joystick is the most pleasant way to navigate the settings. Pressing the button turns on the monitor. Then, you have to move the cursor to the right to validate the choices and to the left to go back. It is possible to change the source, mode (presets) and access the settings (brightness, contrast, sharpness, overdrive, temperature, etc.). The menus are readable and navigation is quick.

With its 32-inch slab, this monitor takes up a good portion of our standard 140cm wide and 60cm deep desk. The foot is content with a depth of 21 cm and its aerial design frees up a lot of space on the desk. It is still necessary to plan a desk deep enough to benefit from sufficient distance to take advantage of the large screen size. The latest versions of operating systems like Windows 10 or macOS perfectly manage Ultra HD definition and allow scaling up to 150% efficient. The text elements are large enough to be readable and the image is crisp. We can also consider the use of the native definition of 3840 x2160 pixels, or 138 pixels per inch (ppi), as long as we get closer to the screen. Note that photo editing software like Photoshop perfectly manages this scaling in the interface, but displays the photos using the native definition of the panel, which allows to benefit from a very high level of detail and appreciable for lovers of retouching.

Right out of the box, the LG monitor is pretty well calibrated, but as we’ll see, there are some presets that are even better. We thus noted an average gamma of 2.2 in perfect agreement with the reference value. In addition, the curve is perfectly stable over the entire spectrum. Same observation regarding the color temperature: the curve is perfectly stable and the average measured at 6330 K is quite close to the 6500 K reference. Only the colors can not be considered faithful to those sent by the source. Indeed, the average delta E is measured at 3.5, a value greater than the threshold of 3 above which the eye perceives the difference between the ideal colors and the colors displayed.

By choosing Rec.709 mode and lowering the brightness to “41” to obtain a white close to 150 cd / m², the color accuracy improves without impacting the temperature and gamma. The temperature is almost identical (6320 K) just like the gamma curve still aligned with 2.2, but the colors display an average delta E of only 2, well below 3. The colors can finally be considered as perfectly faithful to the image. source.

What about the image quality after the personalized calibration of the screen using a probe … It is simply perfect! The temperature and gamma curves are perfectly stable and merge perfectly with the reference values, while the colors cannot be more accurate. No color then exceeds a delta E of 3. You can download this color profile by following this link.

The VA type LCD panel allows the 32UL500 to display very good native contrast. For a white calibrated at 151 cd / m², the black drops to 0.05 cd / m², which translates into a contrast ratio of approximately 2820: 1. This is a very good contrast for a VA panel, although it remains a little behind that seen on the best VA monitors on the market, such as the Philips Momentum 436M6 where the MSI Optix MAG271CR (over 4000: 1). However, this contrast is higher than that offered by IPS monitors which generally rotate around 1000: 1 and allow blacks to be displayed deep enough not to appear grayish.

If this screen is advertised as HDR compatible, we measured a maximum brightness of only 257 cd / m² which greatly limits the impact of HDR. The dynamics are not there and, for us, it clearly does not deserve the HDR mention.

The average white homogeneity deviation is only 9% on this 32-inch panel. There is thus no variation in brightness perceptible to the eye. We did not find any light leaks in the corners or any clouding (cloud effect) on our test model. On the other hand, if the colors are homogeneous when looking at the screen from the front, they vary enormously to more than 45 ° on the sides.

The LG 32UL500 does not use Pulse Width Modulation (PWM) to vary the light intensity. It is therefore devoid of flicker (flicker-free), a phenomenon that can cause headaches in the most sensitive people. It embeds a software blue light filter that reduces the color temperature for a warmer rendering via the “Reading” mode.

This screen also manages FreeSync between 40 and 60 Hz and therefore works best when the graphics card sends between 40 and 60 fps. This is a fairly small range, but suitable for the greedy definition of the screen (Ultra HD) which already requires a powerful graphics card – at least one AMD Radeon RX 5700 XT or a Nvidia GeForce RTX2070 Super. In this operating range, fluidity is at the rendezvous and the image does not suffer from tearing problems (tearing) or jerks (micro-stuttering). Recall that the FreeSync / AdaptiveSync now works with Nvidia graphics cards.

We measured the afterglow time at 12 ms with theoverdrive (called Intelligent Response) set to “Fast”. This setting is used to limit the ghosting (trail effect behind the image) while avoiding the effect of reverse ghosting (a negative drag) that appears with the “faster” setting. This responsiveness doesn’t make it the best companion for highly responsive video games like first-person shooters or competitive games, but for other games it doesn’t pose much of a problem. Finally, we measured the display delay (input lag) at 12 ms (at 60 Hz). There is therefore no lag between the mouse action and its repercussion on the screen.