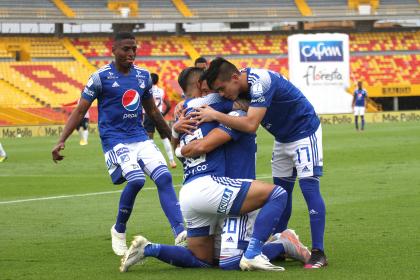 Cristian Arango, leader and benchmark of Millonarios, will continue his career in soccer abroad. The ’10’ albiazul, of great individual moment, will join Los Angeles FC, of ​​the MLS, in a transfer in which the capital team will keep 20% of their pass for future sales.

The departure of ‘Chicho’ represents a hard loss for Alberto Gamero’s scheme, and that is why the club’s fans are demanding a category player from the directives to make up for the forward’s absence.

This Monday, #TeoaMillos became a trend on social networks, as part of the pressure from fans towards the directives to hire Teófilo Gutiérrez, a World Cup forward with the Colombian National Team who is without a club after not renewing his link with Atlético Junior .

For many fans, ‘Teo’ would be the ideal reinforcement for Millonarios, since his character, hierarchy and contribution in attack would be a perfect complete Fernando Uribe, the team’s center forward.

However, there are others who think that Gutiérrez Roncancio is not a good option for the Bogota institution, because, in addition to his high salary, injuries and the disciplinary issue do not give guarantees to dream of a good performance. Will Teo make it to Millonarios? It seems far, but in football anything can happen.

I think that Chicho is a fact then let’s make a trend. #TeoAMillos they help me ?