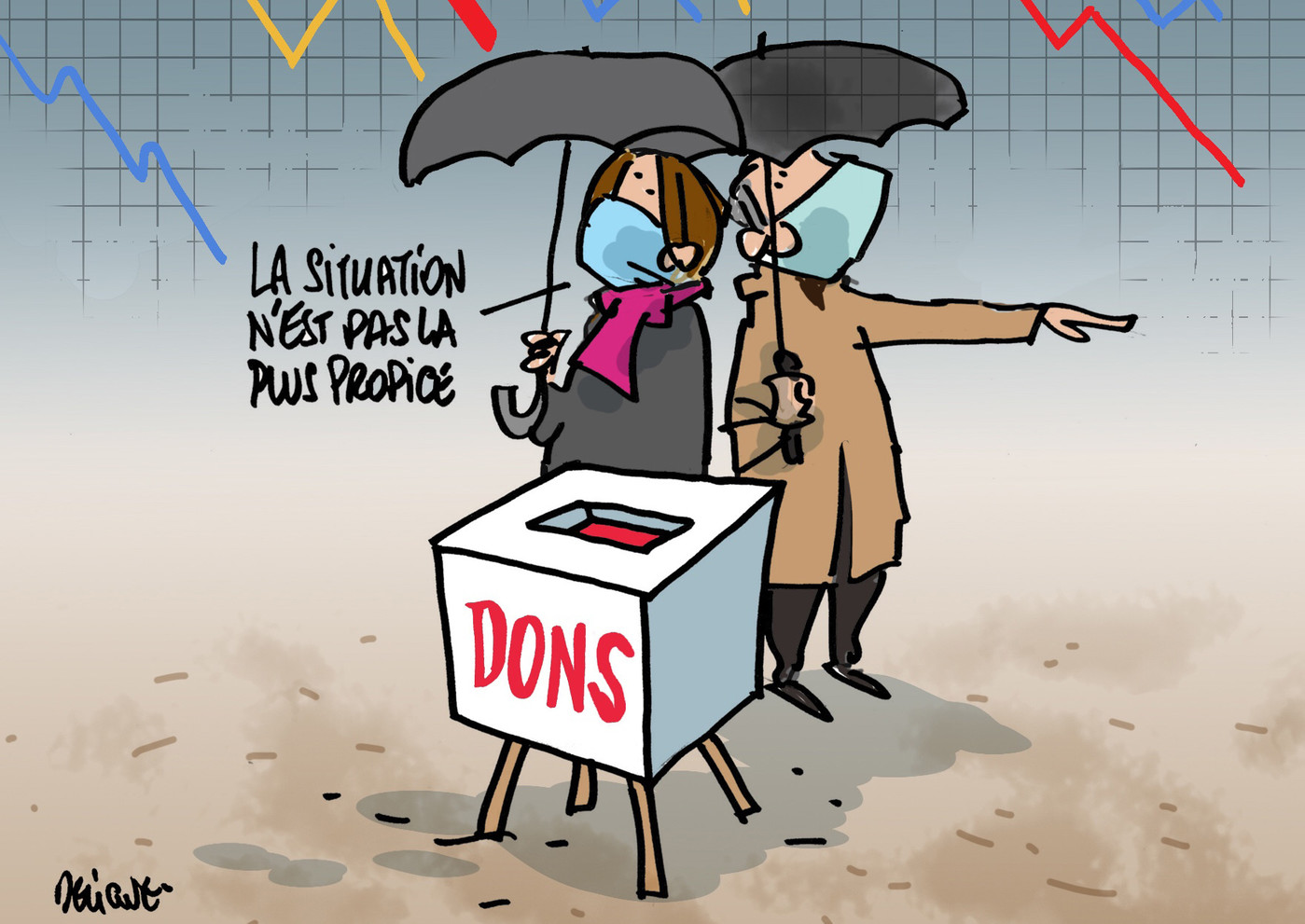 It’s the last straight line. The shorter, the more intense. Each year, associations that collect donations know that “Most of the generosity of the French is played out at the end of the year because 40% of donations on average arrive in the last three months, half of which only in December”, summarizes Nolwenn Poupon, head of studies at France generosités. But, this year, what impact will the Covid period have had, when the economic crisis will considerably increase needs for several years?

According to a Research & Solidarity study carried out in May-June (1) for the associative movement, among associations receiving donations from individuals, 30% had received less; 21% more; 14% as much; 6% collected for the first time and 30% did not yet have the necessary balance sheets to decide. Of those receiving corporate donations, 25% received fewer; 2% more; 10% as much; 35% have not this year solicited their donors, considered already in difficulty (28% did not yet have the elements to be able to answer).

The large associations, which had the means to communicate, generally did well. According to the France generosity barometer, which surveyed 44 associations and foundations, donations increased by 22% in the first half of 2020 compared to the same period of 2019. “We have never collected so much in a first semester”, comments Nolwenn Poupon. In particular, one-off donations increased by 40%, driven by the explosion of online donations (+ 230%). Donations of less than € 150 increased by 30%.

Things can vary from one association to another. “At the beginning, like many, we suffered from mail problems and the end of street collections, explains Stéphane Daugé, director of relations with benefactors at the Fondation des Apprentis d’Auteuil. By the end of the first lockdown, we had seen an 8% drop in our donations, partially offset by the increase in online donations. At the end of June we limited the breakage to -4.8%. “

→ THE FACTS. Les Restos du cœur launch their winter campaign in the midst of the economic crisis

At Restaurants du cœur, Patrick Blanc, the president, notes “Great loyalty from donors” many of which are on direct debit. To the Fondation de France, which, with the AP-HP and the Institut Pasteur, launched between March 24 and June 30 the very visible call for donations “All United against the virus”, intended for caregivers, researchers and vulnerable people, we are delighted with a very exceptional outpouring of generosity. 33 million euros were collected, which made it possible to finance 740 projects. “With the exception of donations for Notre Dame, we had never collected so much from Haiti », Observes Frédéric Théret, Director of Development. “Generosity outside of Covid has also increased by 12% ».

However, warns Nolwenn Poupon, “Given the importance of the end-of-year fundraising, this momentum must continue, otherwise it will be catastrophic. “ The needs will indeed grow.

“During the first confinement, there was an explosion in requests for food aid, in the order of 40%, and even today, it is in the order of 20 to 25% compared to 2019”, specifies Jean-Christophe Combe, director general of the Red Cross. “In 2021, with the economic crisis, many people will lose their jobs, he continues. Almost a million more people are expected to end up in poverty on a lasting basis. ““Poverty will also increase internationally. There is a risk that certain causes, such as international solidarity, lose visibility ”, resumes FrédéricThéret.

An aggravating factor, the second confinement complicates many collections. At the AFM, nearly 40% of the Telethon’s revenue, which takes place from December 4 to 6, comes for example from popular events organized throughout France. To the Secours Populaire, ” every year, our volunteers make gift packages in shopping centers, adds Thierry Robert, the managing director. Tips bring in nearly 3 million euros per year, which we will not have this year if confinement is maintained. “.

These difficulties arise when “All means of associative financing are in danger, explains Frédérique Pfrunder, general delegate of the associative movement. Contributions are down sharply, as are income from activity, and we have concerns about subsidies. ” Sports and cultural associations are in great difficulty. In short, she insists, “The associative world will need the support of all those who think that associations are important. “

While a certain number of French people see their income threatened by the crisis, others have been able to save and could be tempted to open their wallets. According to an Ipsos survey for Apprentis d’Auteuil, 48% of French people plan to give in the second half of 2020, and on the high income side, they are 77% (2).