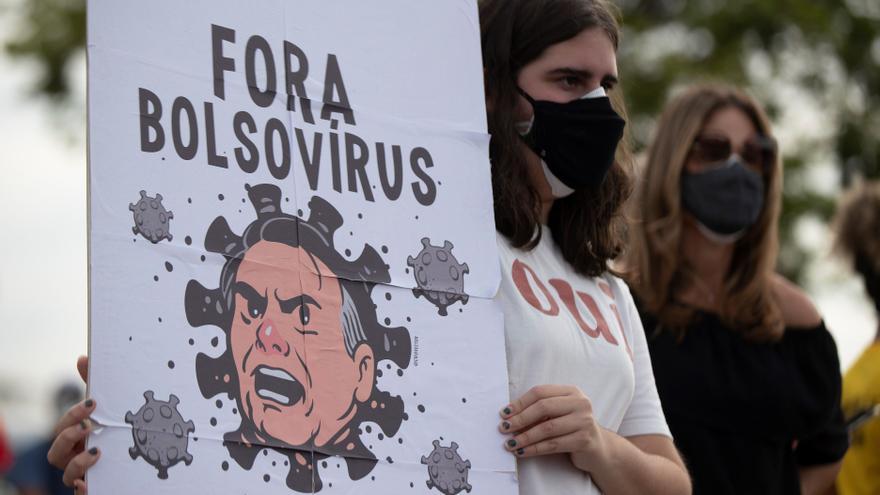 Thousands of Brazilians faced this Saturday the fear of covid-19 and took to the streets to protest against the Government of Jair Bolsonaro, in a unison cry “for life” that resounded in the first mass marches recorded throughout the country since the beginning of the pandemic.

Convened by the trade union centrals, left parties and social movements, protests were held peacefully in more than 200 cities across the country, including capitals, with violent acts by the Police registered only in Recife, the capital of Pernambuco.

The protesters demanded that the far-right leader accelerate the vaccination process in the South American giant and increase the amount of aid so that the poorest – those most affected by the pandemic – have a “decent” income to face the crisis that came with the virus. .

Armed with masks, alcohol gel and posters, the protesters also called for a halt to the privatizations of state-owned companies and an end to budget cuts at universities.

Huge banners with the phrases “Out Bolsonaro!”, “Vaccine for everyone now!” Bolsonaro genocidal ” They were the common denominator in the marches in all the cities, as well as posters remembering the 460,000 deaths and more than 16.3 million infections that have made Brazil one of the countries most affected by the pandemic.

The demonstrations started early in cities like Brasilia, Rio de Janeiro, Bethlehem and Recife. In the afternoon, protests were held in other cities such as Curitiba, Manaus and Fortaleza, as well as in Sao Paulo, the most populous city in Brazil, where the largest march in the country took place.

The iconic Avenida Paulista, the most important in the city, was bursting and traffic was completely blocked in both directions by the number of protesters who attended the event, including families, trade unionists, politicians and students, as Efe was able to verify.

Children, adults and the elderly met at 4:00 p.m. local time (7:00 p.m. GMT) at the Sao Paulo Art Museum (MASP) -traditional meeting point for protests in the city- and marched peacefully for more than three hours in one day accompanied by music and where the “Fora Bolsonaro” did not stop rumbling.

Despite the care of the protesters, there were agglomerations, mainly in large capitals where the marches were massive.

“Being in the streets to fight is an extreme act to say enough”said the Workers’ Party (PT), the formation led by former president Luiz Inácio Lula da Silva, in his message of invitation to the marches.

The dilemma between the discourse of social isolation and the promotion that the agglomerations would have with the marches this Saturday came to oppose each other to parties and leaders of the left in some regions of the country, such as in Bahia, where the governor, Ruy Castro, promoted the demonstrations by car to avoid contagion of covid-19.

The national mobilizations seek to wear down the far-right leader and accelerate the investigations that are currently being carried out by a Senate commission on possible omissions of the Government in the management of the pandemicAlthough the chances of achieving a political trial against the president are still remote.

The commission, created at the behest of the opposition, which has seven of its eleven members, tries to clarify whether the Government has any responsibility for the lack of control of the health crisis in Brazil, which, according to specialists, is already one of the three largest nations battered by the pandemic, along with the United States and India, and is threatened with a third wave.

Complaints made to the commission revealed that the Government delayed the purchase of vaccines; it acted without diligence in the face of the lack of oxygen in the state of Amazonas and promoted the use of chloroquine, an antimalarial without scientific evidence against covid-19.

Bolsonaro, one of the main deniers of the pandemic, he has been minimizing the severity of covid-19, which he described as “little flu“, since the first case was registered in the country on February 26, 2020.

The Brazilian president mistrusts the effectiveness of the masks; defends drugs without proven efficacy against the disease, such as chloroquine; and rejects the confinements and restriction measures to prevent the spread of the virus, because “the economy cannot stop.”