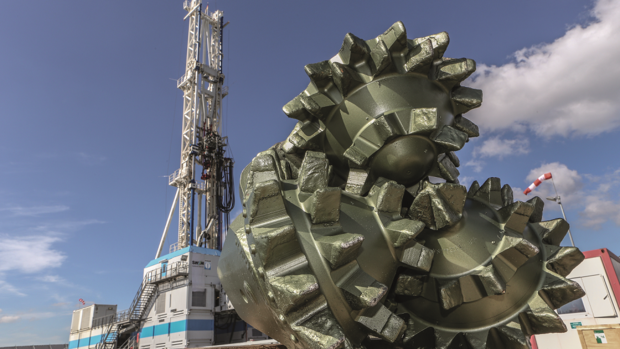 Cologne The pipes have been laid and the girders are already in place. Stadtwerke Lemgo is building the future of heat supply on a site next to the sewage treatment plant. From April onwards, solar collectors will supply energy for the district heating network. This currently supplies 2,000 houses, especially in the old town, with space heating and hot water. This year the city is also building a new heat pump on the Bega River. This takes advantage of the fact that the water has a higher temperature than the ambient air in winter. A total of eleven million euros are being invested, with funding coming from the federal government.

“We want to gradually become less dependent on heat generation using fossil fuels,” explains Daniel Steube, project manager at Stadtwerke Lemgo. The new systems will increase the share of renewable energies in heat production from twelve to 25 percent. But that is only an intermediate step. By 2045, Lemgo should be climate-neutral – this is what the 41,000-inhabitant town in the district of Lippe has committed to.

With the conversion of the heating network, Steube and his colleagues are tackling a sector that has long been neglected in the energy transition. According to a recent analysis by the think tank Agora Energiewende, the building sector has missed the climate targets for the second year in a row. It accounts for around 15 percent of the total emissions and has a high share of final energy consumption. The problem: oil and gas are still mainly used for heating and hot water preparation, and building renovation is also progressing slowly. How the turnaround can still succeed is also an issue Handelsblatt Energy Summit.

The district heating networks are considered the key to gaining momentum in the heat transition. They currently cover at least 14 percent of the heating requirements of residential buildings. And many cities are expanding the networks. This is based on the knowledge that operators investing in renewables help many households to achieve a better climate balance at the same time. Customers are often large housing associations. It takes much more time to persuade homeowners to replace old heating systems.

The suppliers and municipalities are changing course. “As in the electricity sector, many small producers are taking the place of a few central power plants,” says Elisa Dunkelberg, a scientist at the Institute for Ecological Economy Research (IÖW). Municipal heating planning is necessary to coordinate electricity and heat generation and to identify potential for renewable energies. For Berlin, the IÖW is providing important building blocks in the “Urban Heat Transition” project. Among other things, a calculation was made of what type of system makes sense for the city area – with some surprising results.

The researchers came to the conclusion that around five percent of the heating requirement could be covered by the sewage system. That would be possible with heat pumps. A refrigerant circulates in the devices, extracting heat from the environment and evaporating in the process. A compressor compresses the steam, which makes it hotter and can transfer its heat to a heating circuit. This consumes energy, but it is very efficient – and climate-neutral with green electricity. Lemgo already operates a heat pump at the sewage treatment plant according to this principle. “Wastewater heat is very grateful. It is available in all cities all year round,” says Dunkelberg. Other options depended heavily on local circumstances.

In order to reduce the complexity of conversions in large cities, the researchers propose turning public buildings into “germ cells of climate-neutral district heating”. For example, it is possible to install solar thermal systems on school roofs and administration buildings, which also supply surrounding buildings with heat. For example, houses belonging to municipal housing companies could be connected. But there are hurdles to implementation. “When so many players are involved, the question arises as to who will take on the project management,” says Dunkelberg.

While plans are still being made in Berlin, the neighboring town of Hennigsdorf to the north-west is already further along. For historical reasons, most of the residential buildings there are connected to the district heating network. The proportion of climate-neutral producers is already 65 percent, soon it will be 80 percent. A bio natural gas and a biomass power plant contribute to this. In addition, the waste heat from a local steel mill has been fed into the grid since 2020. “It’s a win-win situation. The company receives remuneration, but we pay significantly less than for other fuels,” says Christoph Schneider, Managing Director of Stadtwerke Hennigsdorf.

For customers, however, the bill is different. The high proportion of regenerative energy means that district heating in Hennigsdorf has so far been more expensive than average. But that could change if CO2 prices rise – or if there are bottlenecks in natural gas, as is the case at the moment. While other heat suppliers have sometimes doubled payments on account, prices in Hennigsdorf have recently risen by a moderate ten percent. “Renewable energies are appearing in a new light,” says Schneider.

The change forced by local politics continues. A multifunctional heat storage tank is currently under construction, which contains 18,000 cubic meters of water. For comparison: the large pool in the city’s swimming pool holds around 500 cubic meters of water. There are also solar collectors. “A big challenge is the optimal interaction of the systems,” says Schneider. A separate control system was developed for the concept known as the “heat hub”.

Geothermal energy as a beacon of hope

Technically, Munich has taken a different path. People there rely primarily on geothermal energy. There are currently two geothermal plants in the city area, a third is currently being put into operation and more are being planned. The principle: Hot thermal water is pumped up from great depths, passed through heat exchangers and pumped back into the ground. The systems are the most important building block in the plan to make district heating climate-neutral by 2040. So far, the share of renewables in Munich is 13 percent.

The advantage of the technology: it works at any time of the day or year and is inexpensive to operate. However, the investment costs are high. The drilling, which is up to four kilometers deep, costs ten to 15 million euros, says Rolf Bracke, head of the Fraunhofer Institute for Energy Infrastructure and Geothermal Energy IEG. A complete system costs up to 50 million euros.

According to the expert, geothermal energy is still essential for the heat transition. According to his calculations, up to a third of heat generation can be covered in this way. “Geothermal energy potential and the heat requirements of cities, for example, correspond surprisingly well geographically,” says Bracke. Contrary to what is often assumed, it is not only the Munich area that is suitable for the technology – the fact that the majority of the 40 systems across Germany are located there is due to the high willingness to invest of the comparatively wealthy municipalities in Bavaria.

Elsewhere, the underground has simply not been explored enough, says Bracke: “In the past there were few incentives – with the coal phase-out, many municipalities are now rethinking.” Fraunhofer IEG is currently involved in several projects in potential analyzes in North Rhine-Westphalia, including in Aachen. Even the Romans used warm thermal water there. Bracke hopes that the new federal government, as announced in the coalition agreement, will promote geothermal energy more. Regulatory hurdles would have to be lowered and market entry made easier. The corresponding systems are technically mature – even if there is still room for improvement, for example in the drilling methods.

In order to make deep heat usable for municipal networks, it does not always have to go kilometers below ground. At the Fraunhofer IEG site in Bochum, the researchers are currently testing a different approach. There, a heat pump will soon extract heat from the pit water of a former mine and feed it into the district heating network, which was previously operated from fossil sources. Coal mines could also serve as seasonal storage for solar thermal systems, for example. “The existing infrastructure from the old energy world finds a new use in this way,” says Bracke.

How a good diet can improve the quality of sleep?