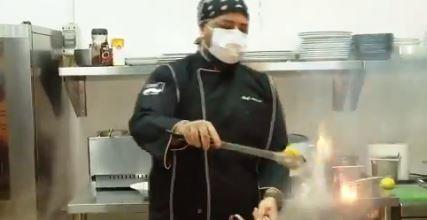 Chef Adnan Yamani reviewed the stages of his success in his profession, which he started with “Basta” to sell beans during the month of Ramadan.

He explained during his meeting on the “mbc in a week” program, that he started his profession by selling beans with his brothers to increase income during the Ramadan and Eid seasons, stressing that they were shy at first, but they insisted on starting this field.

He added that the first project in this field did not make a profit, but through it they were able to learn a lot about cooking, which contributed to avoiding mistakes after that.

His brother Muhammad recounted the details of his resignation from his job, which demanded that he work while he was participating in the “Top Chef” program, which necessitated his brother’s resignation due to the difficulty of leaving the program and going to work, without consulting Adnan.

Muhammad pointed out that Adnan had talent since childhood, something that everyone noticed during family gatherings and travel, stressing that he expected his brother to have a wonderful future in the culinary profession.