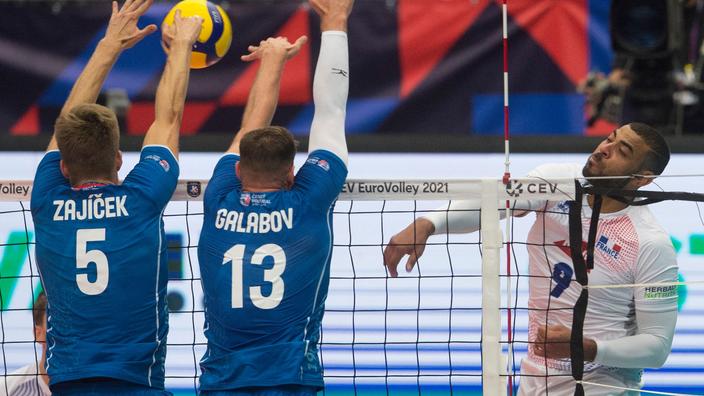 The Tokyo gold medalists were eliminated in the round of 16 of the Euro by the Czech Republic in Ostrava on Monday. A setback for the debut of the new coach, the renowned and ambitious Bernardo Rezende.

August 7, in Tokyo, on a cloud, France is covered in gold at the Olympic Games. September 14, Earvin Ngapeth, the playing master, sinks with the Blues in the round of 16 of the Euro in Ostrava. Eliminated (after 5 successes during the 1is round and only one set lost) 3-0 by the Czech Republic led by Jiri Novak (who was receiver-striker in Paris from 1999 to 2012). The 20 points scored by Jean Patry were not enough. No more than the 7 discarded match points. From the first eliminatory round, like the French team of Didier Deschamps against Switzerland, during the last Euro. A brutal conclusion for the first campaign of the new coach, the Brazilian Bernardo Rezende, illustrated by the bankruptcy of Earvin Ngapeth (11/23 in attack), the leader of the Blues badly inspired. Far from the player who had glided over the final of the Olympics and was crowned best player of the Olympic tournament.

« We didn’t play our game, we got frustrated. We know that this is our big weakness: when we are supposed to be favorites, we are not good. We get frustrated quickly. It’s been like this for years, we have to find the solution “, Summarized the passer of the Blues, Antoine Brizard. The support of the public (4,000 spectators in a trance), the specificities of the room (the lighting seemed to disturb the Blues, the Czechs had been able to get used to it during the 1is tour), the strength and determination of the Czech team represented insurmountable obstacles for the French team.

To bounce back, the next goal, on the road to the 2024 Olympic Games, will be the World Championship, in September 2022 in Russia. Through the League of Nations. For the Blues the JO-World sequence has proven to be indigestible. Ten days of vacation only after a campaign (bronze medal in the League of Nations, then Olympic gold) rich in emotions.

Barthélémy Chinenyeze, central of the France team, retains: “ We had prepared the approach of the match well, but when we saw that they were starting to play well, we had trouble finding the little thing that often makes us play completely relaxed, there was a lot of frustration. We were waiting for a little individual action, a big defense, a big block or an ace, which never arrived, we maybe waited too long instead of taking the reins of the game as a team and going for it. It hurts, but the summer has been long, we went through a lot of ups and downs, we would of course have preferred it to end on Sunday evening with a nice medal, there is disappointment, but there is also the satisfaction of summer in general. »

Bernardo Rezende who took over from Laurent Tillie and discovered the Blues on August 23 during the first internship in Belfort ensures, without shirking his responsibilities: “ We faced a well-prepared team that gave us the first big difficulty and we didn’t know what to do, we made a lot of mistakes. We will have to learn from this lesson, we lost totally, it can happen, we did our best, but we have to understand why we played badly. The manager is me, the players did 100% of what they could do, a good training yesterday. I need to know the players better to know how to help them psychologically. The first lap was too quiet, and from the first difficulty, I did not find the solution. The Czechs played very well, served well, including Hadrava, an experienced player. »