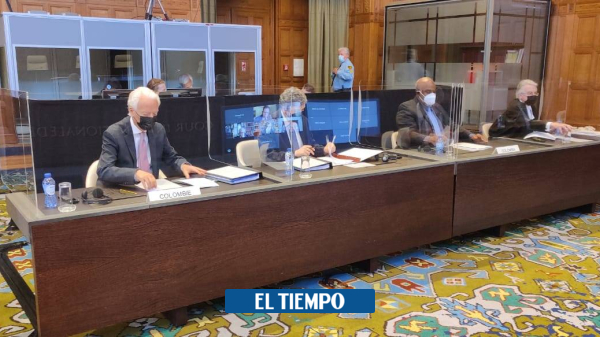 Colombia had the floor yesterday in the international Court of Justice (CIJ), in the lawsuit filed by Nicaragua for the alleged violation of its rights in the Caribbean Sea. They were six hours in which the Colombian lawyers spoke.

His intervention was divided into two stages: the first, to respond to the complaints of Nicaragua and the second, to uncover the arguments of our counterclaims against Central Americans.

You may be interested in: ‘Nicaragua has tried to manufacture incidents where there have not been’

Colombian lawyers focused on refute each of the arguments he presented Nicaragua at the oral hearing last Monday. Central Americans insist that Colombia has breached the 2012 ICJ ruling, which ended up giving them rights in the Caribbean. Their argument is that we are not applying it.

In addition, they ensure that with actions of the Navy and Air Force in terms of interdiction of drug trafficking and environmental control, their rights are being violated.

For this reason, in his intervention Manuel José Cepeda, the Colombian co-agent, made a historical account of the differences that both countries have had and argued that Article 101 of the Constitution “expressly established that the limits of Colombia only may be modified by virtue of treaties”.

(You may be interested in: What happened at the hearing of Nicaragua against Colombia in The Hague?)

The former president of the Constitutional Court recalled that “Colombia’s position has been clear and transparent from the beginning” and explained that the question that has arisen in our country is how to implement the 2012 ruling internally, taking into account the constitutional provisions pertinent issues and the nature of the Colombian legal system in relation to limits.

But also, in an event that is considered unprecedented, a representative of the Raizal community intervened this Wednesday morning before the International Court of Justice. The speech was in charge of Kent Francis James, a Raizal of San Andrés.

“The followers of the faith of the Raizales are baptized in the sea. It is a cemetery for those who left and did not return. It is the source of real and fictional stories, tales, fables, adventures, fun and sadness. As the Raizales say: it is a gift from God ”, he told the high court. And he added that the raizales have always sailed and enjoyed seafood. without any restriction of the limits man-made politicians.

And so, the Colombian lawyers, each one in their specialty, dedicated themselves to refuting everything that the Nicaraguans had raised.

Regarding the Colombian counterclaims, the first is to guarantee the fishing rights of the Raizal community –That is why the presence of James– in the traditional banks, which Nicaragua tries to ignore.

(Also read: The key aspects of what Duque raised at the UN)

And the other, because that country issued a decree related to the points and baselines from which it measures its maritime spaces in the Caribbean Sea, seeking be awarded unilaterally marine areas that affect Colombia and other states.

Next Friday, Nicaragua will answer what our lawyers have said regarding your claim, and on Monday it will respond to the counterclaims.
And then the turn for Colombia will come again.

You can also read: This is how the hearings of the Nicaraguan lawsuit begin in The Hague