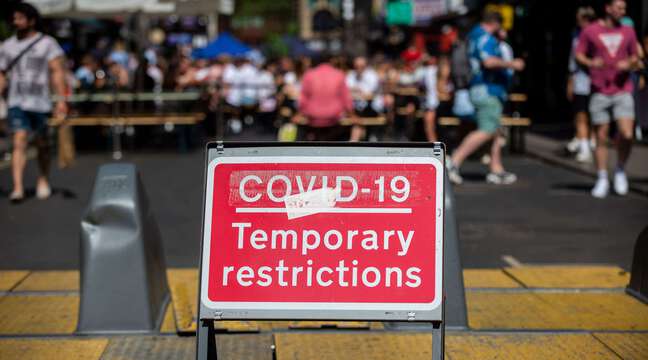 The Guardian did he make a link between
the Delta variant and
anti-covid vaccination ? This is what suggests a screenshot of the British newspaper which has been circulating since Sunday. We only see this headline: “Why do most people who are currently dying from Covid
in England have been vaccinated. “

The title, however, is a shortcut. By going to the website of Guardian,
we can read, immediately under the title, this precision of the authors: “Do not see a bad sign, it is exactly what one expects from an effective but imperfect vaccine. “

This screenshot was relayed by several Internet users, including the musician Francis Lalanne. “It comes from the media, not from the ‘conspirators’,” he commented.

This article has been published in the opinion pages of the Guardian. The platform is signed by David Spiegelhalter, the president of a center attached to the University of Cambridge which is interested in risk communication, and Anthony Masters, statistical ambassador at the Royal Statistical Society. They have been posting a weekly blog post on the coronavirus since February 24.

If the title speaks of the Covid-19, the forum however focuses only on the Delta variant and figures published on June 25 by Public Health England (PHE). However, these figures show that a majority of deaths caused by this variant in England between February 1 and June 21 were in unvaccinated or partially vaccinated people (with a single dose), contrary to what the title.

Over this period, PHE found that among the 117 people who died from this variant of Covid-19, 43% (50 people) had received two doses of the vaccine. A majority were not vaccinated (44 people) or were partially (20 people). PHE does not specify the vaccination status of three people.

How to explain, despite everything, that 43% of deaths were recorded in people who were fully vaccinated? The two specialists explain that this data is not necessarily worrying. “Imagine a world where absolutely everyone has received a vaccine that is not perfect. Although the death rate is low, all those who died were said to have been fully vaccinated. A way of emphasizing that the vaccines against Covid-19 make it possible to very strongly reduce mortality, without however preventing it completely, in certain populations.

No Delta Variant Deaths Recorded in Fully Vaccinated Under 50s

The other 109 deaths were recorded among those over 50. Among these deaths, PHE identified a majority of unvaccinated (38 people) or partially (18) people, which represents a total of 56 people.

50 deaths were recorded in people who received two doses, for 3,546 cases of Delta variant recorded over this period in this population.

How to explain this difference between those under and over 50? As the authors of this column note, “the risk of dying from Covid-19 depends extraordinarily on age”. That “halves” every six to seven years, they detail: “This means that a fully vaccinated 80-year-old essentially bears the risk of an unvaccinated person of around 50 – much lower, but not yet zero, so we can expect a few deaths. “

In addition, PHE gives very little information on the profile of people affected by this variant: the agency does not specify, for example, whether they were immunocompromised, nor does it give their exact age.

A majority of unvaccinated infected people

As of June 28, 37 million English had received a first dose of vaccine and nearly 28 million a second dose.