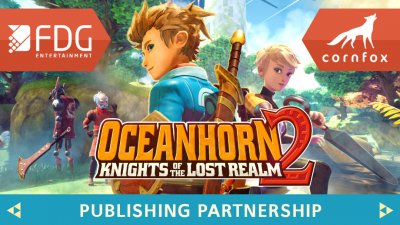 Released in September 2019 on Apple Arcade and very recently on Nintendo Switch, the Zelda-like of Cornfox & Bros talk about him again. As a reminder, Oceanhorn 2: Knights of the Lost Realm is an action-adventure game set a thousand years before the first title. You play as a knight who must unite different peoples in order to overcome the demon Mesmeroth as well as his gigantic army.

So, Cornfox & Bros and FDG Entertainment have joined forces again to bring production to various platforms. Are concerned the PlayStation 5, the Xbox Series X | S, the PC “and more” according to the words of the editor. Even though the Xbox One and PlayStation 4 aren’t mentioned, it looks like Cornfox & Bros does intend to port its game to all machines. Wait and see…

If you want to get your hands on Oceanhorn 2: Knights of the Lost Realm, the Switch is available on Cdiscount for € 399.95.