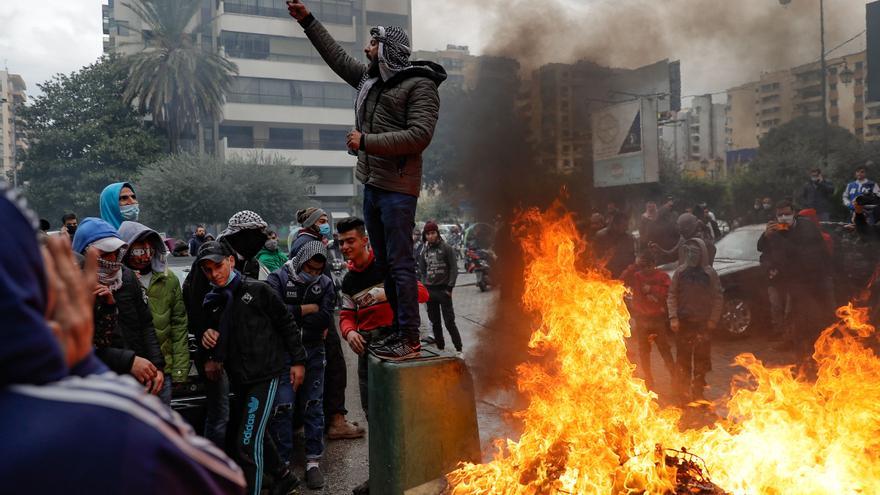 The name of Omar Arrives resonates in the squares of Tripoli. For the past four days, Lebanon’s second city has been the scene of protests ante la absence of state aid to compensate for confinement. Tiba, 30, was the first mortal victim of the clashes violent with the police in the early hours of Thursday. Under chants of “revolution”, the poorest city on the Mediterranean coast according to the World Bank denounces the strict closure that plunges Lebanon into poverty and famine.

Before a unprecedented coronavirus outbreak in the country, the authorities decreed a new confinement two weeks ago. With a curfew of 24 hours, even the supermarkets are closed. “We just want our minimal rights to live as human persons ”, they defend from ‘Live Love Tripoli ‘, an association of young activists. In the past four nights, protests suppressed by the army and police have left more than 220 injured and one dead, according to the Lebanese Red Cross.

“We want to eat”They claim from the streets. In Tripoli, the absence of state aid hangs over a population that survives thanks to the informal economy. “70% of our citizens live every day, with their shops or street stalls,” explains this independent group of young boys of the Lebanese city. The Government promised an assistance of 400,000 Lebanese pounds – about € 40 at current exchange rates – for vulnerable families, but this money will not reach the end of confinement, scheduled for next February 8.

When the protesters threw stones at the forces of order and tried to access the town hall, the riot police they responded with shots airborne live ammunition to disperse them. Most of those protesting are young unemployed men. “Tripoli has a very high unemployment rate, harassed by the presence of Syrian and Palestinian refugees ”, denounces Nazih Fino |. “Poverty is widespread since it has always been a city historically neglected by the Government,” he notes.

“You’re giving us arms & we’re saying we don’t want to go to war, we want to eat & get an education. I speak to you from the city of Tripoli with the men here, in 10 years we’ll get an education (by force) & we’ll throw you (the politicians out) & we’ll become the MPs ourselves&rdquor; https://t.co/dAOgr9m11o

Lebanon suffers its greatest economic crisis since the civil war (1975-1990). With more than 50% of its population below the poverty line, the explosion of August 4 at the port of Beirut detonated a very deteriorated economy. The devaluation of the pound by 80% has not prevented the increase in prices. “But people are still charging like before and everything is more expensive every day ”, they add from Live Love Tripoli.

In addition, the country lives its worst moment of the pandemic. During the Christmas holidays, some 80,000 expatriates They returned to Lebanon to reunite with their family and friends. The Lebanese authorities decided relax restrictions in another attempt to save the economy. The recent surge in coronavirus cases is largely attributed to this decision. With record daily death figures, Lebanon plunges into despair.

Hospitals are overwhelmed for the first time in this country of six million people, with almost total occupancy in intensive care beds. The shortages of oxygen, ventilators, and medications It has led citizens to seek alternatives abroad, who can afford it. Almost 290,000 cases since the beginning of the pandemic and 2,553 deaths by coronavirus are the alarming figures of Lebanon.

Meanwhile, on the streets across the country, the Lebanese show solidarity with their compatriots in Tripoli. International Amnesty has denounced the use of French-made weapons illegally to disperse the demonstrations. The organization has required Paris stop selling material like tear gas or rubber bullets.

Epicenter of the protests movement October 17, Lebanon’s second city is known as the “bride of the revolution”. With nothing to lose, the Tripolitans take to the streets to claim a dignified life between so much abandonment. From Live Love Tripoli, they relight the wick of the revolution, the ‘zaura’ in Arabic: “the people call ‘zaura‘to any movement in defense of your rights&rdquor;.