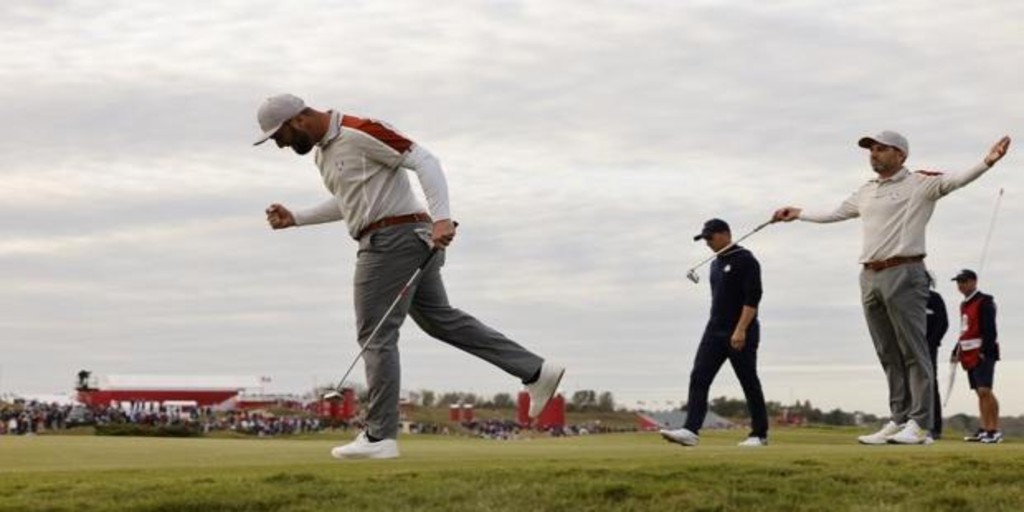 The Ryder Cup is a team competition, so it needs each of its members to contribute the best that they have inside. And, in addition, that their rivals do not reach that level at any time. Therefore, the fact that there are two players with an exalted role does not guarantee, much less, the achievement of victory.

In this edition of Whistling Straits Sergio García and Jon Rahm are showing an attitude and quality far superior to that of their opponents. Both when they play alternate blows and their own, they achieve a rapport and effectiveness such as has not been seen in the Ryder for many years. Specifically since 1993, when Severiano Ballesteros and José María Olazábal won their last match in the tournament against Tom Kite and Davis Love III.

In this new Hispanic duo it is difficult to say who plays the role of leader and who is the companion. That is a matter of taste. With the two unbeaten (the Biscayan as the winner of three and a half points out of four possible and the Castellón with the three disputed in his favor) they have been the best Europeans by far. And, by the way, they are making history with each passing game.

After the majestic northern couple, who won twelve of the fifteen games they played in the four years they shared a dressing room, Garcia and Rahm are already in the national golf parnassus. With this full of victories in Wisconsin exceed the record of Seve and Manolo Piñero, that in 1985 they also achieved three triumphs, albeit with one defeat against. That is why it can be said that here is a block that should be taken care of for the future, since the present is more than dark in this 2020 edition.

After a morning session to forget, in which the continentals started strong and came to see three games in blue on the table, the passing of the holes gave way to harsh reality. The Americans have a strong and constant game that does not forgive the mistakes of the opponents. And when they are weak and without confidence (as is the case with Tyrrell Hatton, Lee Westwood or Matt Fitzpatrick), in the end it takes its toll.

Curiously, those who started badly were the Spanish, who for the second day in a row were paired in this modality. They lost the first three holes and, although they came back in the fourth, in the fifth they were again three behind. “At that time we weren’t thinking about the holes we had lost, but about the ones we had ahead of us to overcome,” explained Jon Rahm at the end. And of course, with that winning mentality it was logical to think that they were going to achieve it. Just like Ian Woosnam and Nick Faldo did in 1997 against Larry Mize and Lenny Wadkins. They fell again with good putts on 6 and 8 and on 9 the Castellón put it from outside, with which they could already face the return route on an equal footing.

“The best thing was that at that moment I regained my sensations and began to enjoy the field,” Garcia admitted bluntly. And boy did he. With the smile on his face and the unconditional support of his compatriot, who began to leave the ball in the ideal places, the ‘record holder’ of the competition was suddenly with two up in the 13 after a gift from Brooks Koepka, which was not as fine as Friday and did not have the expected support of Daniel Berger. So the Spanish only had to continue fighting against the wind in the long shots and leaving it close in the shorts to close the clash in the 17th by an eloquent (3-1).

The final comeback was missing

On Saturday he would end with Sergio’s 26th victory in his pocket, with which he surpassed Nick Faldo to become the most victorious in history, after his new evening success. The foursballs began with six strokes behind (9-3) and that led Europe to a miracle never seen before. Only four strokes had been reduced on a Sunday on two occasions since the tournament began in 1927, so they needed to file everything possible to avoid reaching the singles half dead. For this reason, the Americans had to be swept away without major strategies.

At this point, the Spanish returned to comply (2 and 1) against Koepka and Spieth while Lowry’s Irish spark jumped, who along with Hatton saved another point in extremis on the 18th hole against Finau and English. The rest, more of the same. McIlroy and Poulter disappointed again (4 and 3 against Johnson and Morikawa) and Hovland and Fleetwood could not overcome Scheffler and DecHambeau (3 and 1) either. So today, with six points down, it is not even worth praying, but only “I will go out and give everything as far as we can to enjoy on the field and give back to the fans all the support they have given us.” Serfio García dixit.