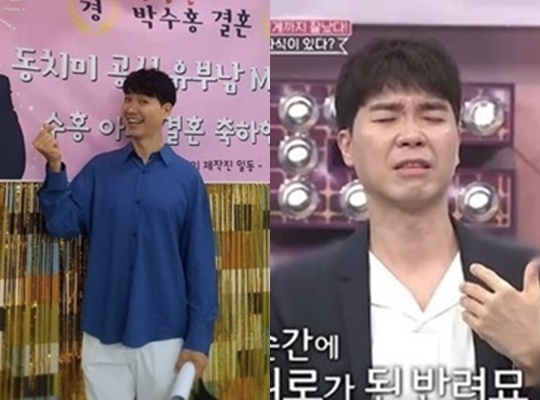 Broadcaster Park Soo-hong (51) announced his marriage after four years of dating, and while congratulations from colleagues continued, he received a big congratulations and laughed broadly in a program where he confessed his complicated feelings.

Comedian Shim Jin-hwa posted on her Instagram on the 29th, “My dear senior. congratulation on your marriage. #Married man #Congratulations #Happy #Let’s only walk on the flowery road” along with a picture and video.

In the place that seems to be the waiting room of MBN ‘Dongchimi’, there is a ‘Park Soo-hong wedding celebration, Dongchimi’s official married man MC Park Soo-hong. A placard with the words ‘Congratulations on your marriage to Su-hong’s father’ is hung. 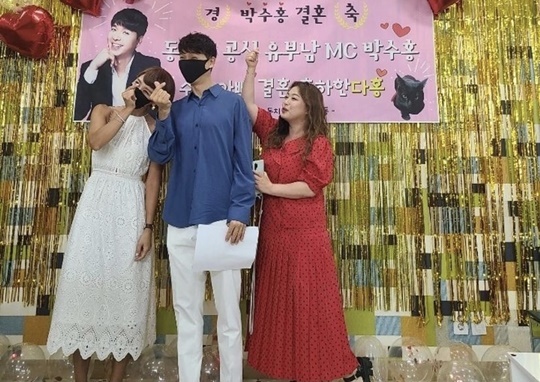 Previously, Park Soo-hong said in ‘Dongchimi’, which was broadcast on March 27, “Recently, I am having the most difficult year since I was born. I had an experience where my life collapsed to the extent that I thought people would die like this.”

He continued, “One day, a viewer commented. ‘You know that Park Soo-hong rescued Da-hong, right? Da Hong-i rescued Park Soo-hong.” When I saw that comment, I was moved to tears.”

It was revealed that Park Soo-hong was worried about the viewers and those around him through the broadcast, and that he was in conflict with his older brother, who was in charge of management, over financial issues. In the end, Park Soo-hong started a legal dispute over his older brother. In April, lawyer Jong-eon Noh of S Law Firm said, “I filed a complaint with the Seoul Western District Prosecutors’ Office against my brother Park Jin-hong and his spouse for violating the Act on the Aggravated Punishment of Specific Economic Crimes (Embezzlement).” In June, he also filed a civil lawsuit worth 11.6 billion won against his brother and sister-in-law.

Park Soo-hong’s side revealed that his older brother decided to distribute the profits at a certain ratio, but he did not comply with this and misappropriated and partially embezzled the company’s funds. He also claimed that there were circumstances in which various taxes and expenses were passed on to Park Soo-hong without carrying out the settlement of the appearance fee.

However, his brother-in-law has denied the allegations of embezzlement. In particular, in the process, the older brother drew attention by revealing that the conflict with Park Soo-hong was due to Park Soo-hong’s girlfriend. Park Soo-hong’s wife was born in 1993 and is known to be 23 years younger than Park Soo-hong, but the specific identity has not been disclosed.

While continuing the legal dispute with his older brother, Park Soo-hong posted on his SNS on the 28th, “I became the head of a family today. I registered my marriage with the person I love.”

He continued, “Before the ceremony, the reason why I became a couple first is because I met the person I want to share my future with, and I have a deep trust in each other and love each other that much, but there is no other reason.”

Park Soo-hong said, “I have endured too much and have not been able to live independently. Because I thought that everything would be better if I endured alone. Now, as a head of the household, as a husband, and as Da Hong’s father who gave me hope, I live for my family. , trying to raise an ordinary family.”

He continued, “I’m sorry that I couldn’t have a luxurious wedding even though it wasn’t as big and flashy as others. However, I do not want to commit the folly that hurts and hesitates with my personal affairs.” He added, “The person who became my wife is a non-celebrity and an ordinary person, so please refrain from excessive interest and reckless speculation.”

Congrats from fellow comedians and netizens followed, and Park Soo-hong thanked her cat Da-hong through SNS. He said, “I didn’t even think of it, but thank you so much for the many congratulations.” He said, “It’s already been 4 years since we officially started dating in December 2018.

I am so grateful to my wife who has worked hard to understand my situation and to fit everything for me. I will live well. Thank you,” he said again and again.

Park Soo-hong’s wife was born in 1993 and is known to be 23 years younger than Park Soo-hong, but the specific identity has not been disclosed.