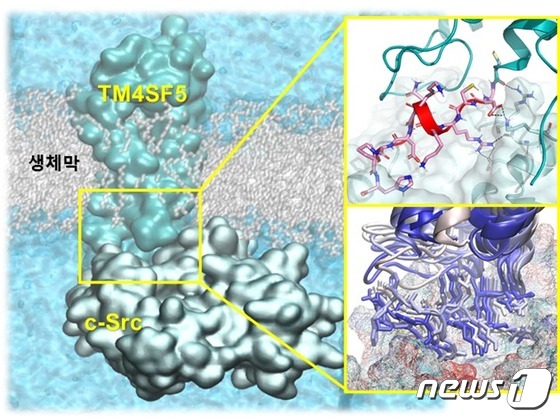 The National Research Foundation of Korea announced on the 28th that a research team led by Professor Lee Jung-won of Seoul National University and Professor Choi Sun of Ewha Womans University has proposed a peptide to interfere with the binding of c-SRC and TM4SF5, a representative oncoprotein involved in liver cancer, etc.

It was well known that the binding of these two proteins induces tumors by activating signals related to cell proliferation or migration.

Therefore, the research team revealed in detail the site where the cell membrane protein TM4SF5, which is widely expressed in liver cancer, binds to the oncoprotein c-Src through molecular modeling and mutation research.

The C-terminus of TM4SF5 binds to the inactivated c-Src present in the cytoplasm to bring c-SRC to the cell membrane, and it also binds to dephosphorylation enzyme, suggesting a mechanism to activate c-SRC. did.

Furthermore, based on this, a peptide fragment resembling the C-tail of TM4SF5 was designed to prevent the binding of the two oncoproteins.

In other words, it was expected that the peptide would block the binding of the two tumor proteins by competing with TM4SF5 and snatching c-SRC.

In particular, it included a viral peptide sequence that aids in cell penetration to ensure substantial competition.

By identifying the site of oncoprotein interaction in detail through molecular modeling and mutation research, it is expected that this will be the beginning of the development of inhibitors that can block this interaction.

Meanwhile, the results of this research were published on the 6th of ‘Theranostics’, an international medical journal.