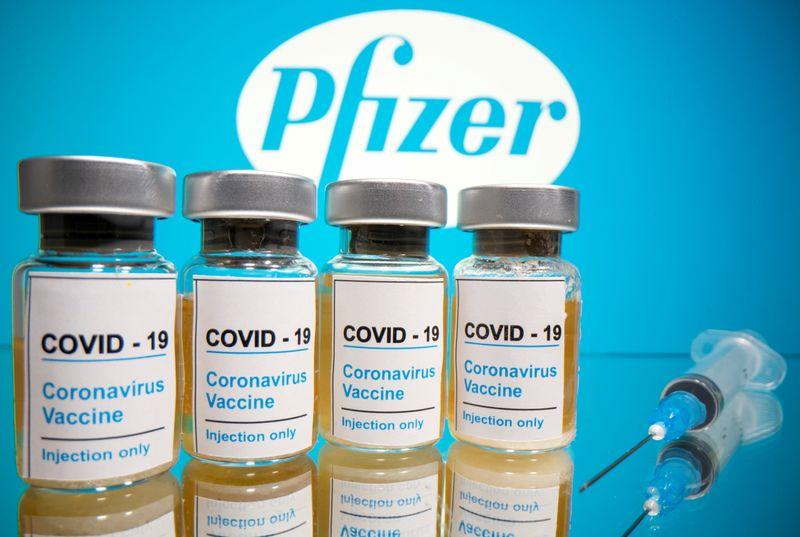 Nov 18 (Reuters) – Pfizer Inc to seek emergency approval in the United States for the use of its COVID-19 vaccine, just days after final test results showed its injection was 95% successful without Serious side effects, the drugmaker announced Wednesday.

The efficacy of the vaccine, which it developed with its German partner BioNTech SE and is due to begin shipping in December, was consistent across different demographic, racial and age groups, and no major adverse effects were detected, a sign that the immunization could spread in populations around the world.

Efficacy in adults over 65, who are particularly vulnerable to the virus, was greater than 94%.

The vaccine’s success rate is the highest of all candidates in the later stages of clinical testing so far, and experts said it was a significant achievement in the effort to end the pandemic.

Pfizer said Wednesday it reported 170 cases of the disease in its trial with more than 43,000 volunteers, of whom 162 were under observation for a placebo and eight had received doses of the experimental vaccine.

Ten people developed severe COVID-19 symptoms and of them only one had received the vaccine.

“First time in human history: less than a year from virus sequence to large-scale clinical trial of a vaccine, also based on an entirely new technique,” said Enrico Bucci, a biologist at Temple University in Philadelphia. . “Today is a special day”.

Pfizer said it will apply for emergency authorization “in a matter of days” and expects the US Food and Drug Administration’s (FDA) advisory committee on vaccines to review the data at a public meeting, likely to be held in December.

The FDA committee is scheduled to meet Dec. 8-10, according to a source familiar with the situation, but the dates could change. The FDA did not respond to requests for comment.

The final analysis was revealed just a week after the initial results of his vaccine demonstrated greater than 90% efficacy. Another American company, Moderna Inc, released preliminary data for its COVID-19 vaccine on Monday, showing a similar rate.

Better-than-expected data from the two vaccines, which use a new technology called “messenger RNA (mRNA)”, have cemented expectations that the resurgence of the pandemic, which has killed more than 1.3 millions of people in the world and devastated the global economy.

However, while some groups such as health care workers will have priority for vaccination in the United States this year, it will be months before inoculations of the general population can begin.

The company also stated that the vaccine was well tolerated and that the side effects were mostly mild to moderate and disappeared quickly.

The only severe adverse effect that affected more than 2% of vaccinated people was fatigue, detected in 3.7% of recipients after the second dose. Older adults were more likely to report fever and minor adverse effects after inoculation.

The results are released as the virus spreads rampant in the United States, Europe and other parts of the world, putting enormous pressure on health systems in the face of record numbers of new cases and hospitalizations.

The arrival of winter in the Northern Hemisphere, along with the Christmas season, is expected to increase cases as people spend more time indoors and reunite with their families.

“With hundreds of thousands of people becoming infected every day, we urgently need to deliver a safe and effective vaccine to the world,” Pfizer Chief Executive Albert Bourla said in a statement.

Pfizer and BioNTech also said they plan to send the data to other regulatory agencies around the world and the United States. They also plan to submit the final study analyzes to a scientific journal for peer review in the scientific community.

Reports from Michael Erman in Maplewood, NJ, Additional reporting from Ankur Banerjee in Bengaluru. Edited in Spanish by Marion Giraldo