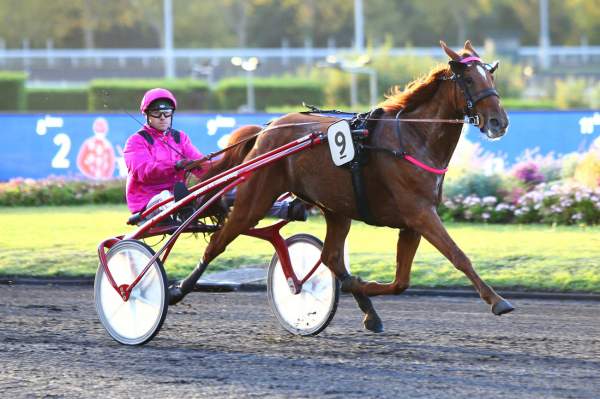 Quinté + from trotting Saturday to Enghien with the Dominique Savary Prize, a level D harness race, over 2,150 meters starting at the autostart, for 7 to 10 years inclusive, not having won € 232,000. EMONE CRUZ (our photo) is a potential winner.

The free prognosis of Quinté + Pmu of the day, Z5 ZEturf, 5of5

1 EMONE CRUZ : Regular mare, she remains on a good third place in a D race at Sables-d’Olonne. And on May 7 at Vincennes, in a D race over 2100 meters long track, she won by dominating the right Fast Domino. With Eric Raffin on the sulky, it looks formidable.

5 EL GRECO BEAUTIFUL : In his last four outings, he has two wins and two second places. He had won in particular, on the green carpet, on June 18 at Vincennes in a D race. Given his form and his means, he should also play a leading role.

2 EADSHOT JOSSELYN : Fifth in the Quinté + on July 3 at Enghien, it finished second in that of May 21 at Vincennes. Between these two performances, he was classified second in a D race on June 12 over the 2850 meters of the main track. It is logically part of the good chances of this test.

3 EFFIGY MADRIK : Unlucky on July 16 at Sables-d’Olonne, it had previously courageously won the Quinté + of July 6 at Vichy. It also recommends a good fourth place in a D race on June 11 at Vincennes. It’s a good commitment for her at the earnings ceiling. It still has the means to distinguish itself.

6 DIABLO D’HERFRAIE : He did two races warmed up in July, without being barefooted, at Graignes and at Mont-Saint Michel. Judged on what he has done best, especially this winter at Enghien and Vincennes, he has a say in a good ranking in such a field. In addition, its commitment is very favorable to the earnings ceiling.

8 CADET : Third in the Quinté + on June 30 at Vichy, it had previously ranked fifth in a D race at Enghien, finishing very pleasantly. For a place, it is a possibility.

12 DUKE OF CHRISTAL : Third in a C race on July 17 at Enghien and sixth in a D race, behind Cadet, on June 4 in Vincennes, it constitutes here a most valid outsider.

10 DE LA CHENEVIERE : Fifth behind Duke of Christal on July 17 at Enghien and third in the Quinté + level D on June 25 at Vincennes, this 8-year-old mare can be considered for a fourth or fifth place.